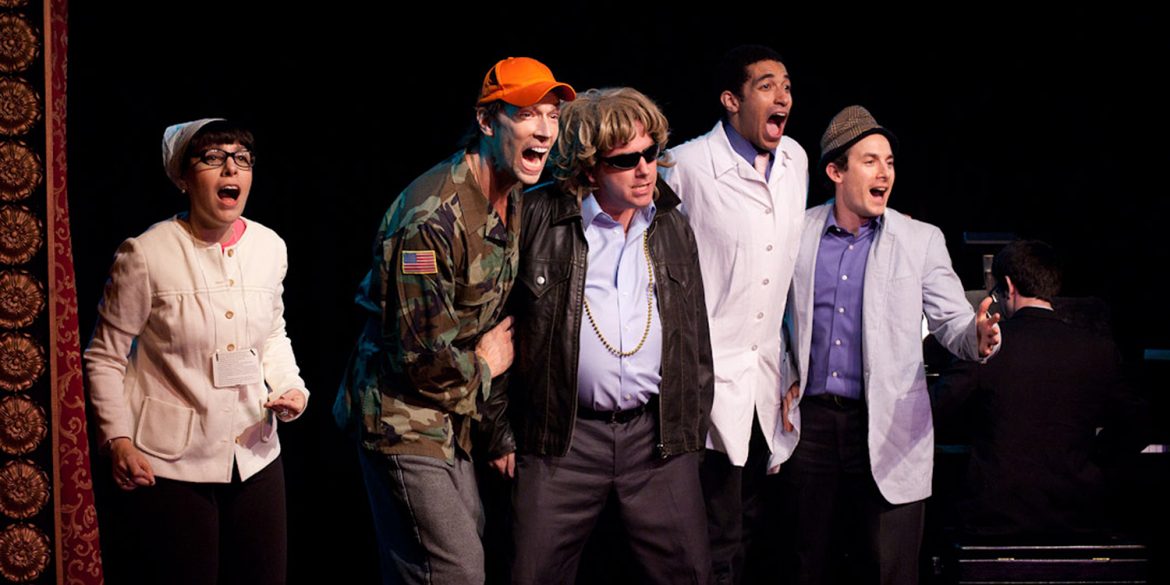 The next hit musical on Broadway could just come from – North Newton?

That’s the premise of Broadway’s Next H!T Musical – “The Tony® Awards meets ‘Whose Line Is It, Anyway?’” – which will open the annual Hesston-Bethel Performing Arts series, Oct. 5 at Bethel College.

The show is at 7:30 p.m. in Krehbiel Auditorium in Luyken Fine Arts Center on campus.

Broadway’s Next H!T Musical is the only unscripted theatrical awards show. Master improvisers gather made-up suggestions for hit songs from the audience and then create a spontaneous evening of music, humor and laughter.

The audience votes for its favorite song – and then the cast of Broadway’s New H!T Musical turns it into a full-blown improvised musical, complete with memorable characters, witty dialogue and plenty of plot twists.

BNHM has been seen at The Triad, the Tribeca Film Festival and the New York Musical Theater Festival, among other recent venues.

The New York Times called it “hilarious,” while Time Out NY said, “At last! A musical of, for and by the people.”

Under the direction of improv veterans Rob Schiffmann and Deb Rabbai, BNHM earned the accolades “brilliant” from TheaterWeek and “remarkable” from the New York Post.

So don’t miss the next great American musical – it could be written in your town.

Season tickets for 2017-18, as well as reserved seating and general admission tickets for Broadway’s Next H!T Musical Oct. 5, are available at hesstonbethel.org or by calling 620-327-8158.

Single tickets are for sale at Bethel College’s Thresher Shop in Schultz Student Center and in the Hesston College bookstore during regular business hours. Prices for BNHM range from $27 to $23 with discounts available for students and senior citizens.

The Hesston-Bethel Performing Arts series is funded in part by the Hesston Convention and Visitors Bureau, the City of North Newton, Excel Industries and Hustler Turf Equipment (Hesston), the North Newton Community Foundation, the Kansas Creative Arts Industries Commission (which receives funding from the National Endowment for the Arts), the National Endowment for the Arts, and area businesses and patrons.