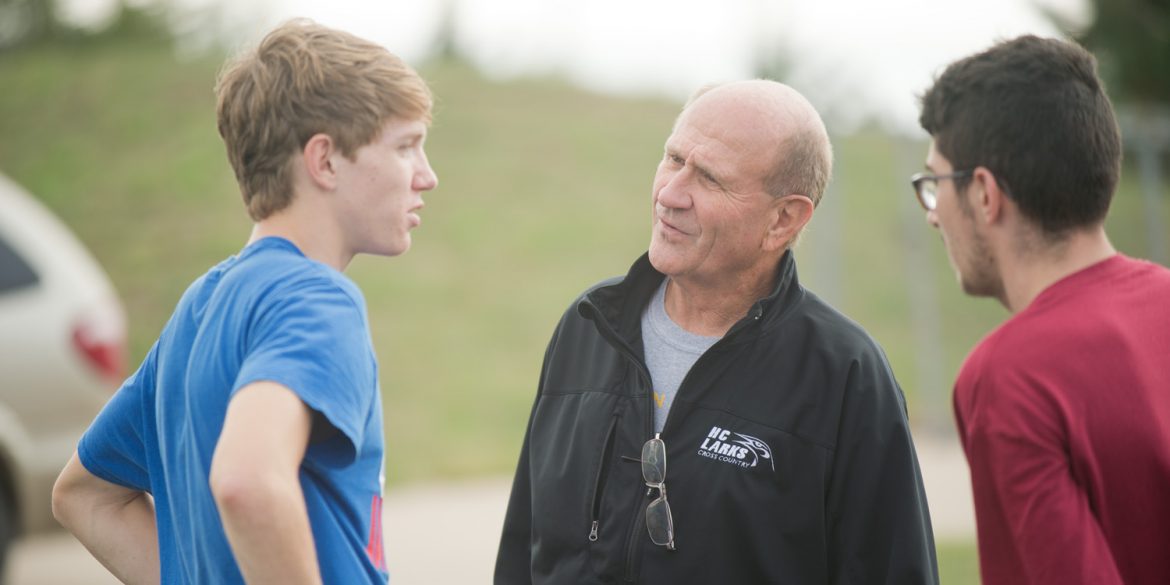 Runner’s World magazines dating back to the 1970s are piled high around his office. Team photos hang on the wall. And there, in the middle of all the memories, sits Gerry Sieber, reminiscing on his lifelong love for athletics and his 30 years at Hesston College, now coming to an end.

Sieber will retire after this year’s cross country season, but his coaching career at Hesston College goes far beyond that sport. Sieber has coached soccer, basketball, track and field and cross country. He has even taught wellness classes and served as athletic director for the college. The race has been long, but not without reward.

In 2015, Sieber was inducted into the NJCAA Soccer Hall of Fame as the longtime mentor of the Larks’ winningest program. in 23 seasons his teams tallied 247 wins and ten region titles, 22 players earned NJCAA All-American honors and Sieber was named Coach of the Year eight times. He says he draws on much more than strategy in the game.

“We had success, we won a lot of games, a lot of championships. But the thrill of getting a lot of students together was this idea of 11 becoming one. Winning was pretty important, but there are a lot of other things that make it meaningful: The growth of the players and the development of the whole person.”

“Gerry works very hard to build community and accountability within the team,” she says. “He wants the team to be connected and supportive. He doesn’t just work on improving our running, he also stresses the importance of academics, overall physical health and spiritual growth.”

Sieber has always stayed true to the idea of growth on and off the field, taking teams on service trips to Argentina and Puerto Rico and leading some of Hesston’s experiential learning trips to Arkansas and Colorado.

After graduating from Hesston College (‘64) and then Goshen College (‘66), Sieber headed to Tabor College (Hillsboro) to teach physical education and to coach. But after two years as a Tabor Bluejay, positions opened at Hesston College for a head soccer, basketball, and track coach. Sieber returned to his old stomping grounds to be a Lark.

“Because of my love for sports and playing, I was drawn into the vocation of coaching and teaching,” Sieber said. “The fact that I went to Hesston and had played sports at Hesston made this a natural progression.”

He dabbled in many sports while at Hesston, but Sieber calls soccer “his main sport.”

Coaching at Bethel College (North Newton) in between his time at Hesston College (1994 to 2009), Sieber continued to coach men’s soccer, started the women’s soccer program, coached track and field and launched the cross country team for the Threshers.

And that is where Sieber finds himself in his last coaching season: with the Hesston College men’s and women’s cross country team.

The Larks cross country team boasts a women’s group Sieber says is the strongest he’s ever had the privilege of coaching.

“This is my last coaching ‘dance,’” he said. “I haven’t told the team this, but I really want it to be a good dance. And I think it will be.”

When the season ends, Sieber will continue to stay active through racquetball, biking and swimming. He plans to spend time with family, travel and volunteer.

Summarizing 30 years of coaching at Hesston College and 49 years of coaching is not easily done, but Sieber continues to express his gratitude and humbleness to have had the opportunities to teach, coach and mentor young adults.

“I feel truly privileged, stretched, humbled and grateful for the opportunity to teach, coach, mentor and serve as a role model to young adults,” Sieber said.

“I am blessed to be the recipient of so many wonderful experiences with so many wonderful people. And to have been surrounded, supported and mentored with the communities I have been a part of. Thank you to my family, church, friends, the town of Hesston, the school’s alumni and faculty, staff and administrators.”