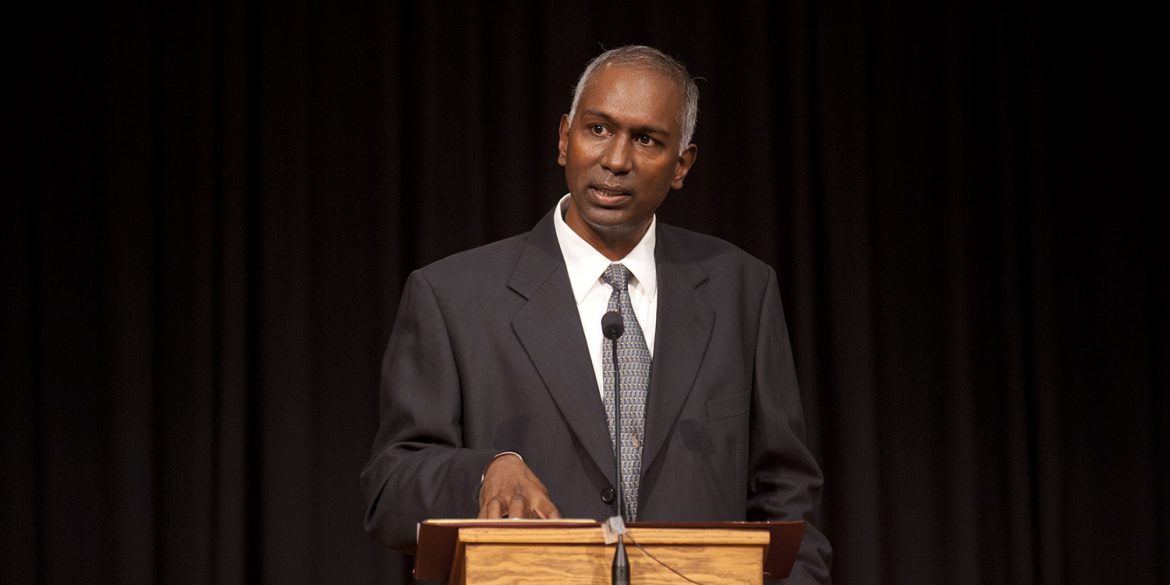 The Hesston College Board of Directors, following a unanimous vote by those at its October meeting, announces Dr. Joseph Manickam as its candidate of choice to become Hesston’s ninth president. The Presidential Search Committee made the announcement to the campus community on Oct. 28.

“Dr. Manickam is creative, imaginative and visionary,” said Kelvin Friesen, chair of the Hesston College board. “He is a proven leader who is encouraging, team-oriented and empowering. We are in an era of adaptive change, and we believe the experience and qualities Dr. Manickam brings will serve well in leading Hesston College during this time.”

“As I have traveled around the world, I have become increasingly persuaded of the vital role a Mennonite education must play in shaping our world,” Dr. Manickam said. “It is my hope and dream that Hesston College will continue to be that place where students, staff and faculty are continually molded toward Christ’s love.”

A 1987 graduate of Hesston College, he also served five years as Hesston’s associate director of admissions early in his career.

“He was the strong consensus choice by the search committee because he is a deeply committed Anabaptist in addition to having a strong track record as an innovative and collaborative leader,” search committee chair and Hesston College board vice chair Ken G Kabira said. “Dr. Manickam brings unmatched global and cross-cultural competencies to the role. He has personally experienced the transformative Christ-centered education at Hesston College and has a deep love for the institution.”

The decision came after 10 months of a “careful and intentional process of recruitment and discernment, prayerfully vetting candidates through their strengths, fit and motivation,” Kabira said. “The Lord has always led the right kind of leader at the right time to Hesston College in its century-plus history.”

“The search committee has followed a rigorous and very thoughtful process,” MEA executive director Carlos Romero said. “As Dr. Manickam is announced as the candidate of choice, we look forward to the next steps, which will include the candidate spending several days on campus to interact with the Hesston College community. I believe we all look forward to the successful completion of the process and the appointment of the ninth president.”

Dr. Manickam earned his M.A. and Ph.D. in intercultural studies from Fuller Theological Seminary (Pasadena, Calif.), his bachelor’s degree in communications from Goshen (Ind.) College and an associate degree in automotive technology from Hesston. He did his early schooling in India and Thailand before graduating from Hoover High School in North Canton, Ohio. His doctoral dissertation focused on “A Study of Race, Culture and Ethnicity in the Mennonite Church, USA.” He has served on the boards of The Mennonite and Anabaptist Mennonite Biblical Seminary.

MEA board chair Dr. Judy Miller called Manickam “a visionary leader with proven administrative experience and a deep desire to serve Hesston College, the Mennonite church and the broader community. His educational and life experience will serve the institution, its constituents and future students well.”

The search process is a joint effort of Hesston College’s Board of Directors and the MEA Board of Directors. MEA, the education agency of Mennonite Church USA, supports six higher education institutions including Hesston and provides counsel and staff support in presidential transitions.

A joint release of Hesston College and Mennonite Education Agency

Joseph was born in Chiang Mai, Thailand to Paul and Mano Manickam, missionaries sent by the Church of South India to Thailand in 1958. The youngest of six children, he grew up in a family deeply committed to seeing God’s love translated into the local context crossing social barriers of many forms. During these formative years, cultural swinging was an assumed way of life for the Manickam family as they continually swung between a South Indian home, a western school system and living among the Thai people.

Joseph’s high school years began at a boarding school in South India named Kodaikanal International School. These years marked a return to some of his familial roots in South India where much of his extended family still reside. He completed his high school at Hoover High School in North Canton, Ohio, where he earned a certificate in their automobile mechanics program.

In 1985, Joseph attended Hesston College where he encountered an Anabaptist perspective on the biblical narrative for the first time. Though he majored in automotive technology, his greatest transformation during these academic years was a spiritual transformation toward a deeper understanding of God’s love as demonstrated by his instructors and classmates. The years at Hesston College proved to be time when a Gospel ethic of nonviolence took root in his worldview. This perspective would be further crafted and tested during his years at Goshen (Ind.) College as the United States entered into its first Iraq War.

After completing his studies at Goshen College, Joseph returned to Hesston College to join their admissions department. This appointment offered him the opportunity to travel the country where he encountered the larger Mennonite church in the United States in its various shapes and forms. In particular, his encounter with urban Mennonites and Mennonites living on the margins of society captured his imagination of the power of the Anabaptist story to transform broken relationships.

Joseph and Wanda Wyse were married in 1994 in Yoder, Kansas. At the time, Wanda was working with the Sedgwick County Health Department. In 1996, they moved to Southern California where he began his graduate studies at Fuller Theological Seminary in Pasadena. Joseph joined the staff at the Center for Anabaptist Leadership which provided him a platform to connect with Anabaptist minded congregations in the Pacific Southwest. These encounters further shaped his understanding of diversity within the Mennonite churches as the vast majority of members were first generation Mennonite. These transformative relationships were foundational to his doctoral studies and continue to shape his thought and faith today. It was also during this chapter in Southern California that Wanda and Joe’s daughter, Faith, and son, Matthew, were born.

The Manickam family moved to Lancaster, Pennsylvania, in 2005 where Joseph took up a position with Mennonite Central Committee (MCC) as their area director for East Asia Program in their International Program department. This position would later morph into the area director for Asia Program. During these years in Pennsylvania, Joseph’s travel throughout Asia connected him to the pulse of the global church which often found itself in a complex religious environment – an environment where a person’s vibrant faith could manifest itself with unimagined colors. He also discovered that it was in this context that a genuine Gospel ethic of peacebuilding was relevant and could flourish.

In 2012, following the administrative restructuring of MCC, the Manickam family moved to Chiang Mai, Thailand, where for three years Joseph and Wanda took part in establishing the MCC Asia Regional Office. Joseph is currently the director of the Institute of Religion, Culture and Peace (IRCP) at Payap University in Chiang Mai, Thailand. He is also on faculty with the Peace Studies department where his academic interests include race/ethnic studies and interreligious engagement.