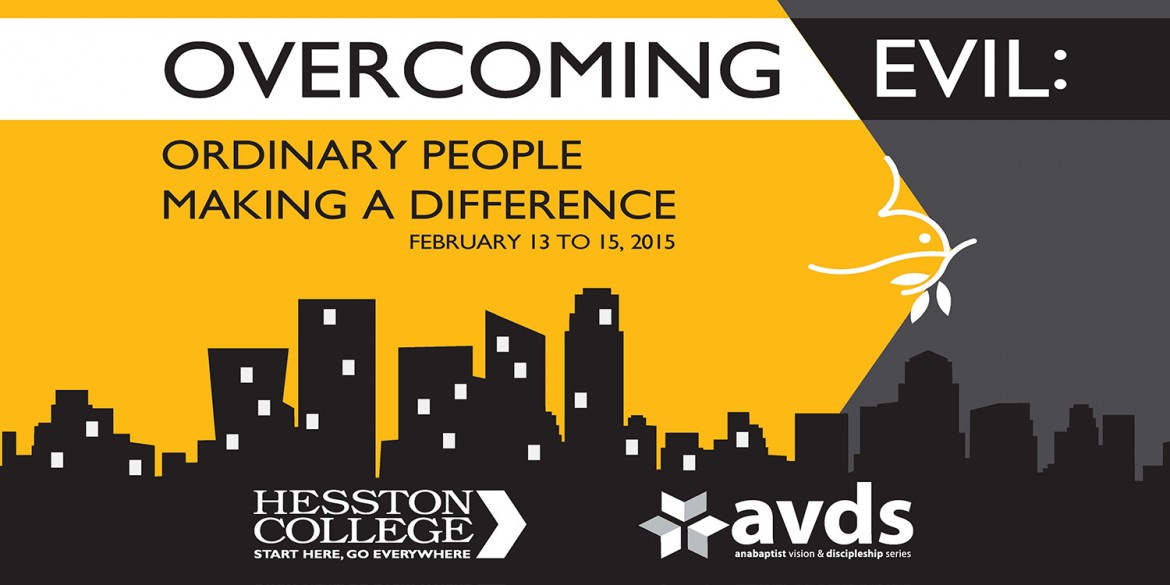 The conference will center on the theme “Overcoming Evil: Ordinary People Making a Difference,” Stories of peace from people locally and around the globe will focus on and encourage to follow Jesus on the path of overcoming evil with good. The 2015 Intercollegiate Peace Fellowship Conference, an organization of Mennonite Church USA for Mennonite and affiliated college peace organizations, will be held in conjunction with AVDS and sponsored by Hesston College’s Bible and Ministry Program.

Dear has spent more than three decades as a peace activist, popular lecturer and movement organizer, and has been arrested more than 75 times in acts of civil disobedience against war. In 2008, Archbishop Desmond Tutu nominated him for the Nobel Peace Prize. He is the author of 30 books, including his autobiography “A Persistent Peace,” that have been translated into 10 languages.

In his nomination for the Nobel Peace Prize, Archbishop Tutu wrote of Dear: “John Dear is the embodiment of a peacemaker. He believes that peace is not something static, but rather to make peace is to be engaged, mind, body and spirit.”

Dear serves as a coordinator for CampaignNonviolence.org and as Outreach Coordinator for Pace e Bene, a group working with individuals, organizations and movements to strengthen efforts to abolish war, protect human rights, end poverty, challenge injustice, heal the planet and build a more just, peaceful and nonviolent world. He has also held many other service positions, including Red Cross chaplain coordinator following the events of Sept. 11, 2001, where he counseled thousands of relatives and rescue workers.

Dear has been featured in The New York Times, The Washington Post, USA Today and National Public Radio’s “All Things Considered.” For eight years he wrote a weekly blog for the National Catholic Reporter and is regularly featured on the radio show “Democracy Now!” and The Huffington Post. He is the subject of the DVD documentary The Narrow Path.