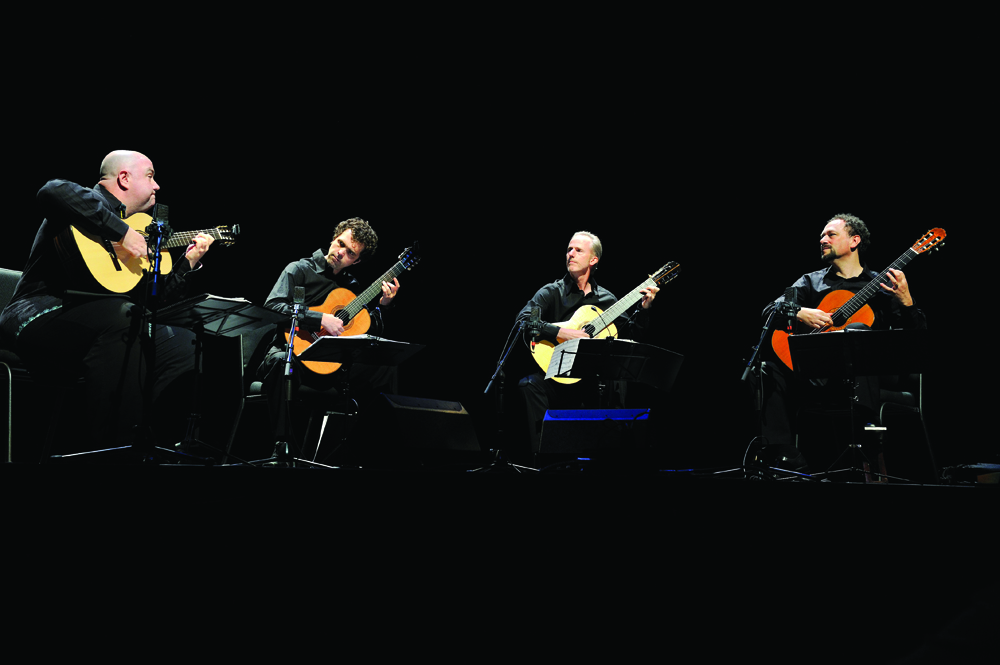 The world-renowned and Grammy Award-winning Los Angeles Guitar Quartet will perform as part of the Hesston-Bethel Performing Arts season lineup at 7:30 p.m., Thursday, Feb. 27, on the Hesston College campus in the Hesston Mennonite Church Sanctuary.

For more than 30 years, the quartet has been hailed as one of the most multifaceted groups in any genre performing from bluegrass to Bach with a repertoire including Latin, African, Far East, Irish, Folk and American Classic work.

The group won a Grammy Award in 2005 for Best Classical Crossover CD with “Guitar Heroes” and were nominated in 2006 for “LAGQ: Latin.” Their 2010 recording of the Rodrigo “Concierto Andaluz” and Sergio Assad’s “Interchange,” written specifically for them, climbed to the top spot on the Billboard charts.

The Los Angeles Guitar Quartet formed in 1980 at the Thornton School of Music at the University of Southern California (Los Angeles) and is comprised of four uniquely accomplished musicians – John Dearman, Matthew Greif, William Kanengiser and Scott Tennant – who also have solo and teaching careers.

Dearman lends a versatility to the group by performing on a unique seven-string guitar with extended upper and lower registers. He is director of the Guitar Chamber Music program at California State University, Northridge (Los Angeles).

Greif is a trained classical guitarist who also has extensive background in jazz, rock, flamenco and bluegrass. His recording of “Permanent Transition” features duo improvisations with Andrew York and Dusan Bogdanovic. Greif was named Outstanding Graduate of the USC guitar department where he studied with quartet members William Kanengiser and Scott Tennant among others. He teaches classical and jazz guitar at Cal State University, Dominguez Hills.

Kanengiser is professor at the USC Thornton School of Music and acclaimed recording artist and soloist whose recordings range from music of the Old World to the Caribbean. He has also earned critical acclaim for his unique arrangements for solo guitar and guitar quartets, for producing two instructional videos for “Hot Licks” and for his featured role as the classical guitarist in the 1986 film “Crossroads.” Kanengiser is one of the few guitarists who have won the Concert Artists Guild New York Competition.

Tennant is an in-demand solo artist, author of the five-part “Scott Tennant’s Basic Classical Guitar Method” and the best-selling book and video “Pumping Nylon” – a technical handbook for classical guitar – and teaches as the USC Thornton School of Music.

The Hesston-Bethel Performing Arts Series, now in its 32nd year, is a collaborative effort of Hesston College and Bethel College, presenting five performances by world-renowned or regionally acclaimed artists each year. HBPA is funded in part by the cities of Hesston and North Newton, Excel Industries and Hustler Turf Equipment (Hesston), the Hesston Community Foundation, area patrons, the National Endowment for the Arts and the Kansas Creative Arts Industries Commission, which receives support from the NEA.