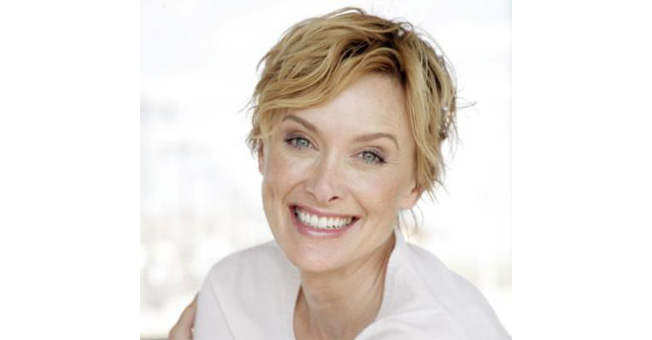 A hometown girl, whose home is now New York City, will take the stage at Bethel College for the third event in the Hesston-Bethel Performing Arts series for 2013-14.

Rachel Kasper Fitzsimons, whose professional name is Rachel de Benedet, will play Emma in Tell Me on a Sunday, with music by Andrew Lloyd Webber and lyrics by Don Black.

The one-woman, one-act song cycle tells the story of an ordinary English girl who goes to the United States in search of love. Her romantic misadventures begin in New York City, lead her to Hollywood and eventually take her back to Manhattan.

When HBPA director Matthew Schloneger of Hesston College began brainstorming with de Benedet more than a year ago about having her perform as part of HBPA, they came up with Tell Me on a Sunday at almost the same time.

Schloneger had seen a production of it a number of years ago, and de Benedet was familiar with it. And she was excited about the prospect of bringing the show to a place she knows intimately – Bethel’s Fine Arts Center.

“I grew up on the Bethel College campus, literally – my mom [Kathryn Kasper] was resident director in Haury Hall when I was born,” de Benedet said.

“It has been fun to sit in New York, staging myself, because I’m directing myself,” de Benedet continued, “and think of all the different parts of the Krehbiel Auditorium stage [and how I can use them]. It’s been an interesting and unique experience.”

She is also very much looking forward, she says, to working with her father on the lighting and set-building in the week of rehearsal ahead of the performances.

One reason for scheduling Tell Me on a Sunday so early in the year was so that it fell within the time that Arlo and Kathryn Kasper are in North Newton – they live in Asuncion, Paraguay, for most of the year.

De Benedet graduated from Bethel in 1988 with a Fine Arts Divisional major with emphases in drama and music, winning a Thresher Award for fine arts that year.

She spent two summers at Music Theatre of Wichita while at Bethel, moving to New York City soon after her second summer, which followed graduation.

“I spent a year on tour with Me and My Girl and Jesus Christ Superstar, then about eight years doing over 70 regional theater productions while based out of Boulder, Colo.,” she said. “In 1998, I returned to NYC and was incredibly fortunate to land my first Broadway show, The Sound of Music, within the first two weeks.

“After that closed, I took over the role of Elsa Schraeder (aka the Baroness) for the national tour of The Sound of Music, starring Richard Chamberlain.” The role earned her a St. Louis JUDY Award for Supporting Actress.

“After a few more regional plays came Nine on Broadway, starring Antonio Banderas, Chita Rivera and Jane Krakowski, and the mind-bending responsibility that is being a ‘dance captain.’

“After more regional work, I started Dirty Rotten Scoundrels, eventually taking over the role of Muriel when Joanna Gleason left, though as her understudy I had logged over 100 performances already. Two original off-Broadway shows came next, and then the national tour of Camelot landed in my lap out of nowhere.”

In addition to The Sound of Music, Nine and Dirty Rotten Scoundrels, which starred John Lithgow, de Benedet’s other Broadway credits are Catch Me If You Can, for which she received an Astaire Award nomination, and The Addams Family, playing Morticia opposite Nathan Lane.

De Benedet has appeared off-Broadway in The Second Tosca and in Christopher Durang’s Adrift in Macao, for which she won the Barrymore Award for Best Actress for the original Philadelphia Theatre Company production.

She also has more than 75 regional productions to her credit, including Anna in The King And I, opposite Lorenzo Lamas, in Maine; Alexa in As Bees in Honey Drown, in Colorado, for which she won the Denver Drama Critics’ Circle Award for Best Actress in a Play; Kate/Lilli in Kiss Me, Kate, which earned de Benedet an IRNE Award nomination, in Massachusetts; and Turn of the Century at Chicago’s Goodman Theatre, opposite Jeff Daniels.

“I’ve had an exciting fall,” de Benedet says, “shooting my first feature film, Creedmoria, in New York City. It’s currently in post-production, and will most likely start on the film festival circuit next year.

“Here are some other current projects – besides learning this one-woman show [Tell Me on a Sunday],” de Benedet added. “I am part of the developmental process of two new plays right now. One stars Jason Alexander and one is with Kate McKinnon from the current cast of Saturday Night Live.

“Being a part of new work is one reason I moved back to NYC 15 years ago. I have had the great fortune of working one-on-one with some of our best-known living playwrights, composers and directors, such as Terrence McNally, Christopher Durang, David Yazbek, Maury Yeston, Jack O’Brien and Tommy Tune.

“The last three Broadway shows I was in [Dirty Rotten Scoundrels, The Addams Family and Catch Me If You Can], I was part of from the first readings on.”

De Benedet is married to Tom Fitzsimons, also a New York theater professional, but on the technical side. They have a son, William, 19 months old, and live in New York City.

For more information about Rachel de Benedet’s HBPA appearance or to purchase season or single tickets, call 620-327-8158 (Hesston College) or 316-284-5205 (Bethel College) or visit the HBPA website at hesstonbethel.org.

HBPA is funded in part by the cities of Hesston and North Newton; Excel Industries and Hustler Turf Equipment (Hesston); area businesses and patrons; the Kansas Creative Arts Industries Commission, which receives support from the National Endowment for the Arts, a federal agency; and the NEA itself.