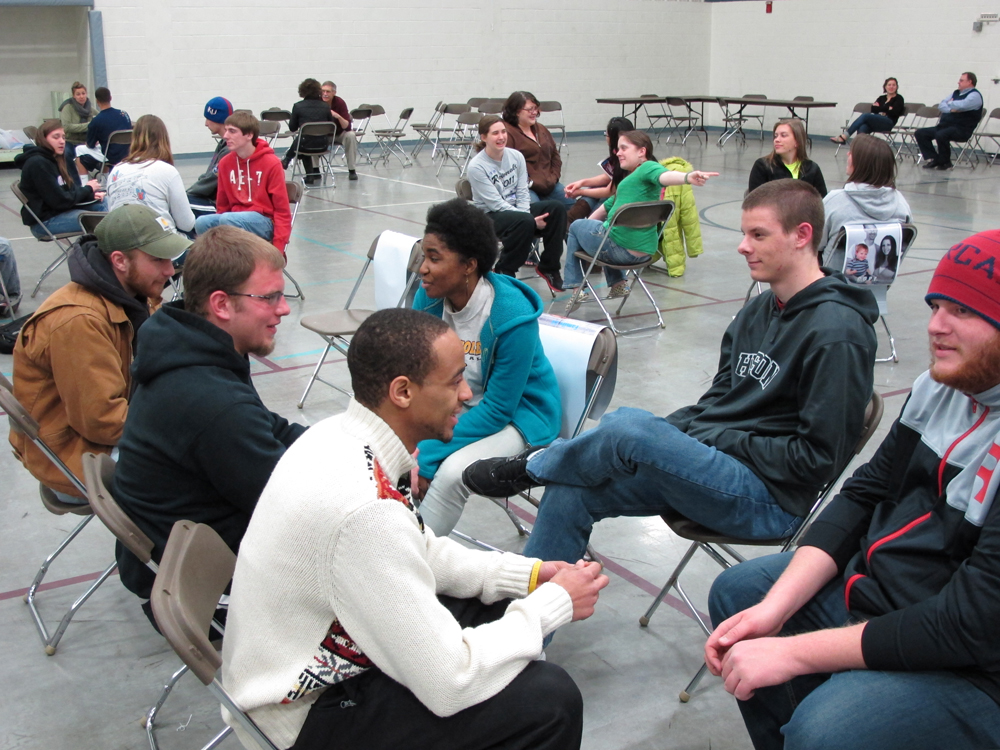 More than 100 Hesston College students spent Wednesday night learning what it is like to live below the poverty line during a college-sponsored poverty simulation led by Harvey County Circles of Hope – Peace Connections in Newton, Kan. Circles of Hope works to develop resources, educate the community and inspire change in trying to eliminate poverty.

Students were separated into families of all sizes – from one to seven – and dealt with real scenarios while juggling all the responsibilities that come with taking care of self and family over the course of a month. Some family members worked, others stayed home on disability or unemployment and children attended school. Together they had to figure out how to pay for rent, food, utilities, gas, child care and any other necessities.

Failure to fulfill their responsibilities resulted in consequences such as having their utilities shut off and paying to have them turned back on, children taken into protective custody by social services because of parents who failed to buy groceries during the week and winding up in court for a variety of offenses and neglect.

“We hope that through this experience, students will gain a greater understanding of and sensitivity toward all people in the world,” said Hesston College education faculty member and event organizer Tami Keim.

According to Circles of Hope representative and simulation leader Glenda Reynolds, 15.1 percent of the United States population lives below the poverty line, which for a family of four is below $23,021 a year as determined by the federal government. She encouraged students to jump into the roles they were assigned – to act as their characters may act and try to imagine how they must feel.

As students hurried from one location to the next to be sure they paid all their bills and met all their responsibilities each week, they began to understand what low-income families face every day.

“I knew that it was a struggle for families living in poverty to get by, but I didn’t realize the extent of what they face and the stress they feel in trying to make everything work,” said freshman Abbi Hochstetler of Arthur, N.D.

During the first week of the simulation, only two families bought groceries, and no families paid for utilities. During the second week students ended up in court for various offenses, including failing to pick up their children from daycare, and during the third week, some families had their utilities shut off for failure to pay.

“I have such a greater appreciation for families who live this way,” said sophomore Valerie Maust of Goshen, Ind. “They are often looked down on for not working hard enough, but many of them do everything they can to get by, and sometimes that is not even enough.”

Instructors from several academic disciplines including education, psychology, sociology, nutrition, social work and art had students participate in the simulation. They were encouraged to view the simulation from the perspective of the course they were taking.

“We really appreciate the instructors and the college for orchestrating this event for students,” said Circles of Hope volunteer Bill Reynolds. “Educating our young people in the realities of poverty can go a long way in helping to eliminate it in the future.”