The business of conservation 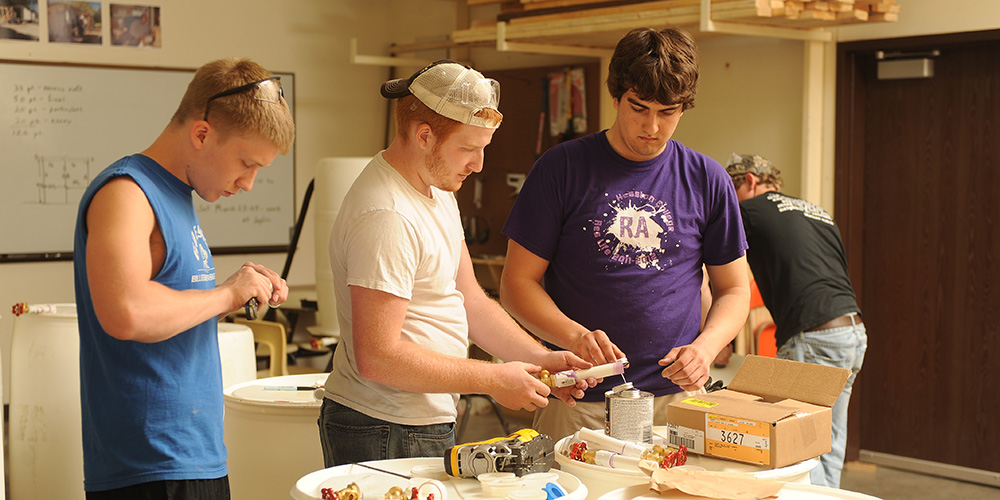 by Kyle Albrecht and Rachel Schlegel

Hesston College business instructor David LeVan has given the same assignment to his Entrepreneurship class each spring semester for the last three years – create and operate a business for a few weeks during the semester as a way to gain practical business experience. In the past, the student-run businesses sold relatively inexpensive and easy to produce products to students on campus.

This year’s class dreamed bigger. The seven students wanted to do something that would benefit more than just the class or the college. Inspired by the college’s emphasis on sustainable living and a suggestion from Bible and Religion faculty member Marion Bontrager, the class decided to make and sell rain barrels.

The students named their business “Menno Barrel,” based on the college’s affiliation with Mennonite Church USA and the business’ local target market. Over the course of about three weeks, the students will manufacture and sell 55-gallon rain barrels. All of the profit earned from the sale of the rain barrels will be donated to Mennonite Central Committee to help with relief efforts in countries around the world.

“We wanted to reach out to the community and do something that would have an impact on more than just students on campus,” said sophomore Mallory Schroeder (Newton, Kan.), Menno Barrel CEO.

The idea and strategy behind Menno Barrel is to help with water conservation and provide a cost-saving water source option for outdoor water needs. The barrels capture rain from roofs and store it for later use. The recycled barrels also complement the students’ efforts to remain as environmentally friendly as possible.

The students are constructing the barrels themselves from recycled food-grade drums purchased from Pepsi Co. in Wichita and selling them for $70, a savings of up to $55 over competitors.

“We analyzed all the costs of constructing our own barrels versus buying them from a distributor and selling them for profit,” said sophomore Hayden Goerzen (Newton, Kan.), chief financial officer for Menno Barrel. “We came up with a design that was simple and effective so the barrels are easy for customers to use, and we are able to offer them at a cost that is much lower than the competition.”

Two of the students on the team participated in a rain barrel construction class at the Sedgwick County Extension Office as part of the research for the company. With just a few adaptations to the design they learned from the class, the students realized that constructing the barrels themselves was both simple and cost-effective.

“The barrels are designed to be fairly simple for any person to install or repair regardless of past experience,” said freshman Brandon Sharkey (Goshen, Ind.), Menno Barrel’s head of manufacturing.

The students of Menno Barrel decided their idea was a good business venture because the nearest competition is about 45 minutes away in both Wichita and Hutchinson. They are excited to be a local option for the residents of smaller towns in south-central Kansas while also offering the recycled option that major home improvement stores do not.

The students drafted a business plan and presented it to college administrators on March 23 to ask for assistance with start-up costs. The college agreed to make an initial investment of almost $1,300, giving the students official approval to move ahead with their business venture.

“This is the best business idea we have seen from this class since it began,” said Hesston College President Howard Keim following the student presentation.

During the first night of manufacturing in the campus facilities space on April 3 the students were efficient and effective in developing a system to clean and begin construction on the barrels. Each student’s business leadership was evident as they worked together to solve problems from a leaky hose to the correct sizing of a drill bit.

“I’m excited that the students decided to take on a project of this magnitude,” said LeVan. “The complexity of the venture required thought and commitment. It’s what I hoped this assignment could be every year. They are working together, taking leadership roles and working with an outside audience, which can be challenging and scary, but they are willing to do it.”

Menno Barrels will be sold during the annual Mennonite Central Committee Relief Sale at the Kansas State Fair Grounds in Hutchinson from 3 to 9 p.m. April 13 and from 8 a.m. to 3 p.m. April 14. They will also be sold on the Hesston College campus during the college’s Earth Day celebration from 10 a.m. to 2 p.m. April 19.