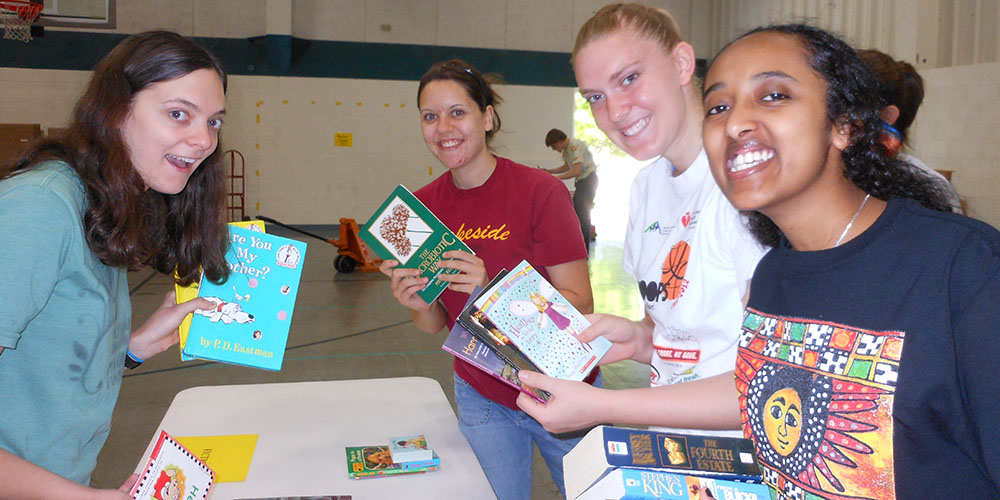 Asbel Assefa’s school in Addis Ababa, Ethiopia, wasn’t so different from the schools her American classmates attended. The education Asbel received at Bethel Mekane Eyesus School prepared her to further her education at Hesston College. Yet one detail sticks out as a glaring difference when comparing Asbel’s school to schools in the U.S. – books.

For many schools in the eastern African country, books that are beneficial to student learning are in short supply. According to LeAnn Clark, a Hesston resident involved with the non-profit organization Ethiopia Reads, many classrooms in Ethiopia have no books and 99 percent of the schools do not have libraries.

Asbel’s Christian school had books and a library, but there was still room for improvement.

“At most schools in Ethiopia, the library isn’t given much priority,” said Asbel, a Hesston College freshman. “My school’s library was unorganized and not stocked with good books for students.”

Hesston College students rallied together and partnered with Ethiopia Reads during the last week of March to package and ship books to create libraries at schools.

According to Ethiopia Reads, Ethiopia is a poor country with an average annual income of $125. Only four percent of the more than 80 million people have electricity and there is overwhelming poverty and disease. About 12 million people will go without eating a meal every day, and 57 percent of the population lives with extreme hunger. The country’s 4.8 million orphaned children give it the second highest number of orphans in the world.

“It is difficult for children in Ethiopia to get a good quality education,” said Clark. “The average child only spends one year in school. They are eager to learn, but in many cases they are only able to attend for a half day because of extreme overcrowding.”

Denver-based Ethiopia Reads was founded in 2001. It collects, sorts and ships books to Ethiopia to open libraries in schools. The organization has opened more than 60 libraries and established five regional mobile libraries. The programs are managed and run by Ethiopians in Addis Ababa and Awassa who also grew up without books at home or school. The organization provides training for the Ethiopian employees in library science, publishing and design, project management and non-governmental organization administration so they can help improve literacy and opportunities for the country’s young people.

“We have already lost a generation of Ethiopian children to AIDS and poverty, and we are going to lose another generation unless someone does something,” said Clark. “There is nothing literacy doesn’t impact – it can change so many things in children’s lives.”

Hesston College’s African Student Union arranged for the campus community to package more than 20,000 books that had been collected by a Houston, Texas, Starbucks. Members of the African Student Union also helped serve at a baked potato bar fundraiser March 16 at the Hesston Area Senior Center where they raised about $1,000 to help ship the packaged books to Ethiopia.

“People in the United States don’t realize just how privileged they are to have books at their disposal,” said Hesston College freshman Zenawit Nerae (Addis Ababa, Ethiopia), African Student Union president. “I hope that by being a part of Ethiopia Reads we have helped people on campus understand the impact books have on education.”

Asbel’s school recently received a shipment of books from Ethiopia Reads as well, and though she wasn’t there to enjoy the new books, she was grateful that someone recognized the need and that her younger sisters could reap the benefits.

“Without good reading material, educating students is hard to accomplish,” said Asbel. “I think education is the best thing for development. I was humbled by the reaction of the Hesston College students and their willingness to help. The work Ethiopia Reads does is special because it has a lasting effect – a really good one.”