A theatre season of literature gears up for a fairytale musical 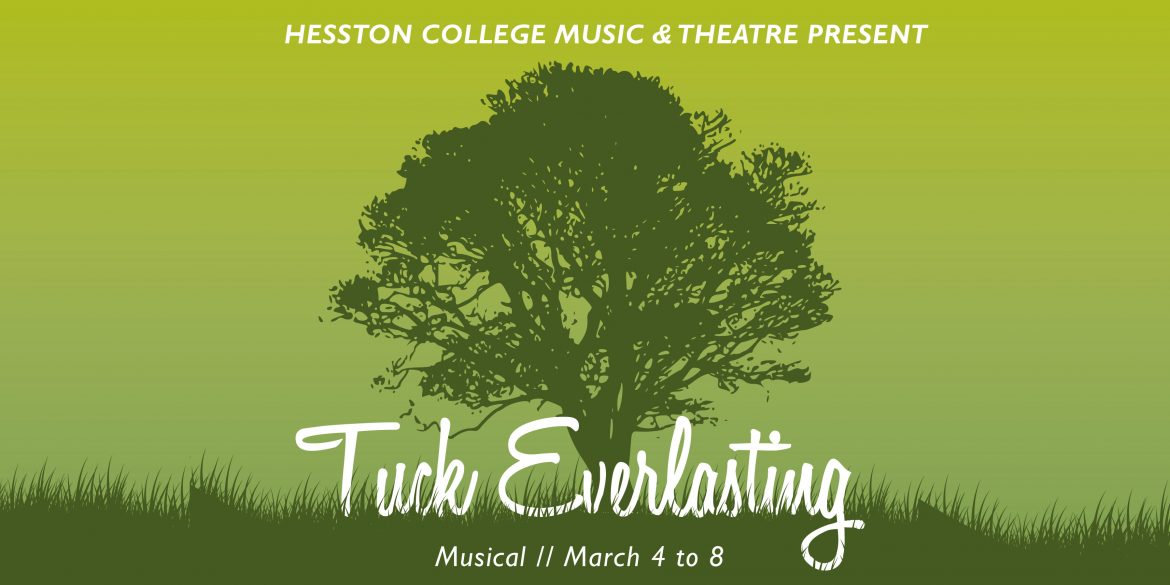 Hesston College Theatre Director Rachel Jantzi always sets her lineup of shows around a theme, which for the 2019-20 season is literature.

“All of this year’s shows are based off of books,” said Jantzi.

After a fall play that featured the drama The Curious Incident of the Dog in the Night-time, Jantzi and her cast and crew are gearing up for a shift in tone with the musical Tuck Everlasting, which runs from March 4 to 8 in the Keim Center Black Box Theater.

Tickets are $12 for adults and $5 for students. Seating is limited so advanced ticket purchase is encouraged. Purchase tickets online, in person at the Hesston College Bookstore in Erb Hall or by calling 620-327-8105.

Based on the book by Natalie Babbit, Tuck Everlasting is a fairytale that tells the story of young Winnie Foster and the extraordinary, life-changing adventure on which she embarks when she discovers the magical secret of the Tuck family.

“I’m really excited about this show for a lot of reasons,” said Jantzi. “I have amazing student actors who perform these rich characters so beautifully. Also, I went to high school with the show’s lyricist, Nathan Tysen, so it’s fun for me as an artist to get to do the work of my artist friends.”

Tuck Everlasting had a short run on Broadway in 2016, and Jantzi notes that bringing the glitz of Broadway it to the Hesston College stage has been an ambitious undertaking, but one that her cast and crew has responded to in big ways.

“This show has more dancing than we’ve ever done,” said Jantzi. “What’s really cool is I got to bring back a recent graduate as our choreographer.”

Choreographer Elizabeth Fulcher is a 2019 Hesston College graduate and a music theatre major at Friends University in Wichita.

“Getting to work with a former student now as a colleague is such a reward,” said Jantzi.

Tuck Everlasting is family-friendly and rated G, but because of its length, Jantzi recommends the show for ages 7 and up.

Coming up later in the season of literature is a late-April presentation of the classic story Charlotte’s Web in a new Theatre for Young Audiences format.

For the last three years, Hesston College Theatre held a playwriting festival that featured local playwrights, but Jantzi has decided to put a pause on Pen to Paper to Performance for the year.

“Adding in a Theatre for Young Audiences show gives us a rotation on the kinds of shows we do,” said Jantzi. “I enjoy hearing from local playwrights, and we’ll continue to do Pen to Paper to Performance every few years, but performing for young audiences also helps actors build a different kind of skill set. They’re performing for an audience that may not always be paying attention or even sitting still, and that requires extra focus. It really is a marketable experience.”

Charlotte’s Web will be performed in an outdoor setting at neighboring Dyck Arboretum of the Plains April 23 to 26.

“I think there is a desire in the community to bring this kind of theatre to our kids and still have it be a show that adults will enjoy,” said Jantzi.