An increase in new students presents a turn toward growth opportunities 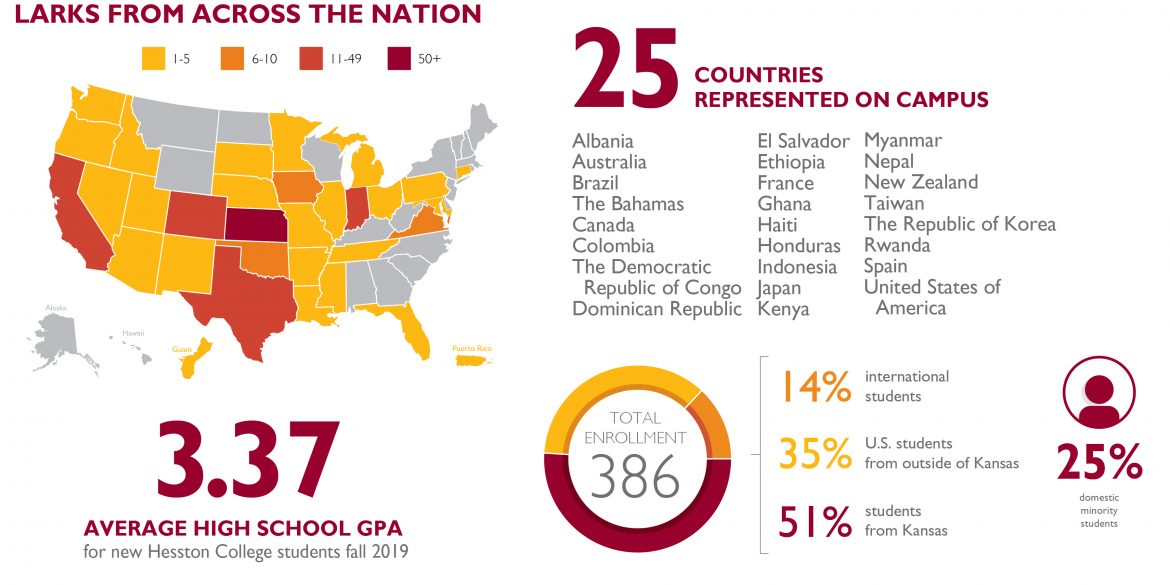 Official enrollment numbers released following the 20th day of classes show a total student enrollment of 386 from 32 U.S. states and territories and 25 countries. The domestic student population includes 51 percent from Kansas and 35 percent from other U.S. states and territories. International students comprise 15 percent of the population. Domestic minority students have climbed to 25 percent of the population.

“Nationwide, the number of high school graduates has been dropping over the last decade,” said President Joseph A. Manickam. “Because of this reality paired with a lower new student number in 2018, we anticipated a smaller enrollment this fall, and we have planned accordingly. We have exciting and innovative plans in the works now that we anticipate will have a positive impact in the future.”

Hesston’s plan to add key four-year degree programs as it has with the new bachelor’s degree program in aviation this fall and nursing in 2015, offer an area for continued growth. This fall, the nursing program has 102 junior and senior students in the final years of their degree training. The aviation program grew by nine students, to a total of 47, between the spring 2019 and fall 2019 semesters, including 15 first-year students joining the community, and four juniors comprising the first bachelor’s degree class.

Other program additions, like the new Intensive English Language Program, could help with growth as early as the spring semester as the five students enrolled in the first year of the non-credit program have the ability to enroll as full-time students in the spring semester following the completion of their language study.

“Higher education has some difficult realities to face right now, and we’re working hard to ensure we’re responding in a way that is sustainable for the future and offers growth opportunities,” said Manickam.