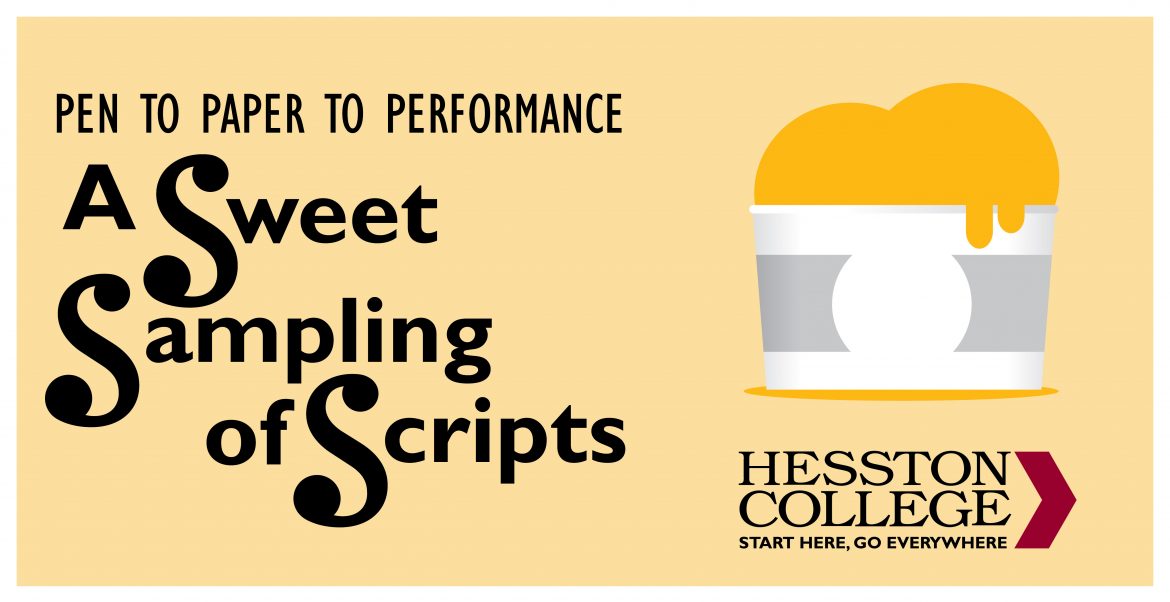 For the third year, Hesston College’s Pen to Paper to Performance playwriting festival will showcase the work of seven local playwrights at 7 p.m., April 26 and 27, in the Keim Center Black Box Theater on the Hesston College campus.

“An ensemble of 14 actors are working on these six very different shows,” said Rachel Jantzi, Hesston College Theatre professor and director. “All are cast at least twice, with some appearing in three different plays. That can be challenging, but the actors are so strong, it makes the work really enjoyable.

Ranging from comedic to dramatic with subjects varying from faith to dating apps, the featured plays in the showcase are:
• Citizen’s Meeting by Lois Thieszen Preheim
• Current Events by Patricia Middleton
• Graveyard Shift by Caitlin Waits
• Swipe Right by Travis Duerkson and Mitch Stutzman
• The Girl Who Could Fly But Then Didn’t by Andre Swartley
• Towering Toward Heaven With Hazel by Loretta Baumgartner
In addition to student actors, two Hesston College professors are also part of the cast – Michele Hershberger, Bible and ministry professor, and Ken Rodgers, music professor.

“It’s been fun working with my colleagues on this,” said Jantzi. “It’s always a treat for both me and the students when faculty and staff perform alongside our student actors.”

Each play runs about 10 minutes in length, and the event is rated PG for mild language. Tickets are $8 for adults, and $4 for students. Tickets will be sold at the door only starting at 6:15 p.m. each night. Seating is limited, so early arrival is encouraged. Each playwright will receive a portion of the box office earnings.

Each night’s performance will include a 30-minute pre-show by the student-led On A Lark improv comedy troupe beginning at 6:30 p.m.

During intermission, ice cream will be served by The Salted Creamery, whose owner and creator is Hesston College communications professor Kendra Burkey.