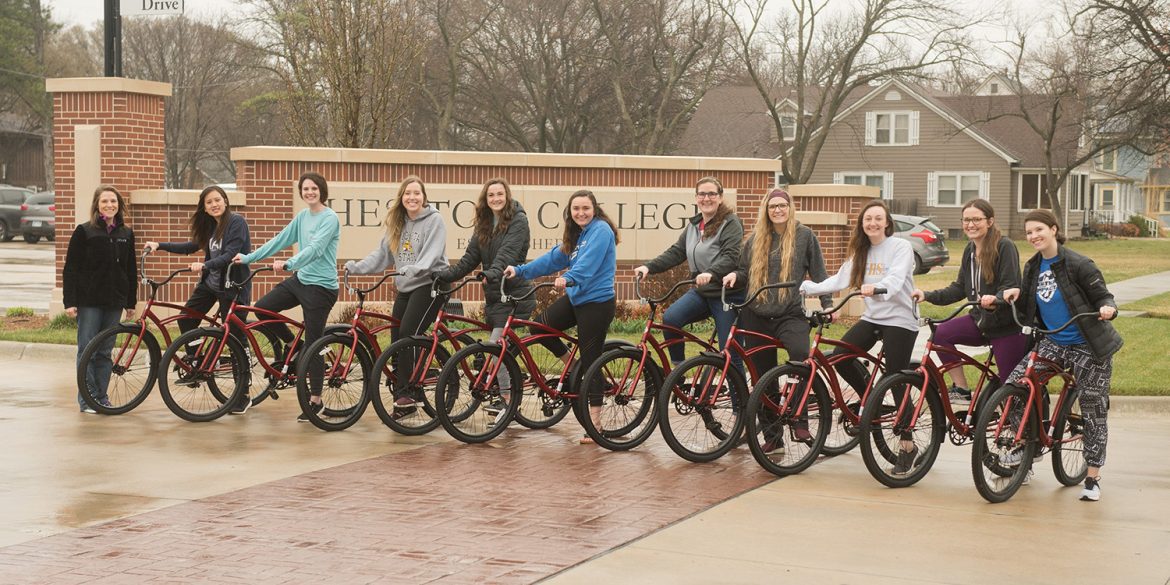 As the spring weather turns more mild, Hesston College students start spending more time outdoors in activities both on campus and off. A new bike share program, implemented by a team of student nurses in the college’s nursing program, was launched just in time for the change in weather and will allow members of the campus community to get around campus and the community more quickly.

Early in the spring semester, senior nursing students in a population-based nursing class were introduced to their clinical locations throughout the area and tasked with identifying health-based concerns in those contexts, and formulating and carrying out a plan to address those concerns.

“Many people are familiar with nurses at the bedside, but unfamiliar with the broader population health knowledge required and utilized by B.S.N.- (Bachelor of Science in Nursing) prepared registered nurses,” said nursing professor Duane Miller. “The Population-based Nursing course focuses on the health of populations or groups and emphasizes nursing practice at the community and systems levels.”

For the 10 students assigned to the clinical site of Hesston College, assessing health needs seemed like a complicated task.

“The needs may be less obvious, but they are there nonetheless,” said Miller.

The students started by conducting a windshield of both campus and wider community.

“A windshield survey is where we drove around the Hesston community and payed attention to really good things about our community and things that needed improvement,” said student Saralyn Oyer. “We did the same thing on campus by walking around and observing these things.”

One thing the students noted was the need for transportation.

“Many Hesston College students come from far away states and countries, and many have no means of transportation,” said Oyer. “I live on Weaver St. near the Casey’s gas station and I see students walking there all the time. This might not seem far, and the physical activity is good, however, we realized these same students, as well as many others, have to coordinate rides or walk to things like doctor appointments or school observations for education majors.”

The students also noticed a need for increased physical activity.

Taking into consideration the need for free transportation around the community as well as encourage enjoyable physical activity, the student team came up with the idea of a bike share program with 10 bicycles that can be checked out for use through a system at the college’s Mary Miller Library.

“This group of students was highly motivated throughout the process,” said clinical instructor Joy Yoder. “I provided guidance and helped the group to focus their energy, but the leadership in this group was solid. After the students talked with other students, faculty and staff about the project, they gained momentum from the excitement that this project would be positive for both mental and physical health for the campus. Knowing that students would have access to much needed transportation options, along with a way to increase activity, was a catalyst for this group.”

The students found a grant through WalMart, of which they were awarded $500. The funds helped cover the upfront cost of the bikes. They also consulted with psychology and Bible professor, Kevin Wilder, who had experience with operating a bike share. Wilder suggested they find individual sponsors to help cover the remainder of the costs, which they did among college faculty and staff.

Overall, the team was able to raise enough funds to cover the cost of the bikes, as well as accessories, such as locks and helmets, and start a fund to cover future maintenance. The college’s Environmental Stewardship Council agreed to help keep the bike share program running after the students graduate this May.

“I really love how the Population-based Nursing class integrates core values of Hesston College as we focus on caring relationships created in these community settings where we creatively explore ideas to improve health,” said Yoder. “The student is challenged in this course and can end with a broader perspective of nursing, realizing where nursing care can be integrated throughout the communities and not just in hospital settings.”