The legacy of a teacher: Closing a 50-year career 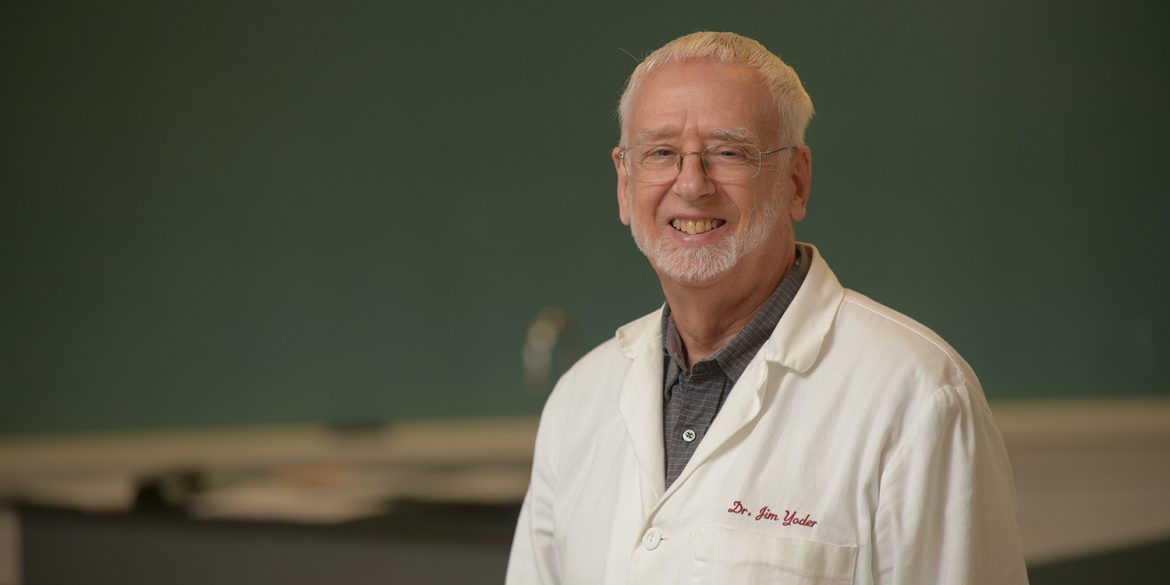 Dr. Jim Yoder’s legacy at Hesston College could easily be described as a rare and striking occurrence to which 50 years of students, faculty and colleagues were connected. Always hungry for increased knowledge and understanding, Yoder is a lifelong learner, transferring his passion wherever he is. But soon, at the close of the 2017-18 year, Yoder will close out his Hesston College chapter as he retires from teaching and leaving behind the longest teaching legacy to date.

As the son of a college professor, Yoder always knew he wanted to be a teacher. His father, Paton Yoder, was a founding faculty member of Westmont College (Santa Barbara, Calif.) and taught history at four different liberal arts colleges throughout his career.

“I was quite clear I wanted to be a teacher,” Yoder said. “I wanted to be a college teacher like dad. But what I was going to teach didn’t become clear until I was a junior at Goshen.”

Starting as a college freshman at Taylor University (Upland, Ind.), Yoder transferred to Hesston College for his sophomore year as his dad stepped into the role of academic dean. But it was at Goshen (Ind.) College, following completion of his year at Hesston, that Yoder chose from among his interests in the sciences, literature and drama, to pursue his passion for chemistry.

“Chemistry made so much sense,” Yoder said. “I think it was partly because literature was too nebulous for me. I wanted things more crystal, more sorted out.”

The bond was instantaneous, and Yoder dedicated the rest of his life to the sciences, graduating from Goshen College in 1964 to go on to obtain his Ph.D. in organic chemistry with minors in physical chemistry and philosophy of science from Indiana University (Bloomington, Ind.) in 1969.

“I went to school twenty years in a row, from kindergarten to graduate school,” Yoder said.

Then it was straight to Hesston College, where he actually began shortly before completing his doctorate program, and where Yoder has been ever since.

“When it came to Hesston, I found out what a blessing it was to have my weekday community and my Sunday community the same,” Yoder said. “There was a coming homeness when they were the same.”

Yoder began at the college in September 1968 with the start of the 1968-69 year, teaching General Chemistry I and II alongside Organic Chemistry I and II. Later, because of his interest in the universe and cosmos, Yoder launched an astronomy course that scores of Hesston College students – even those who are not science majors – have been through as a general education science option.

In the classroom, a commitment to science alongside faith was always an important topic to Yoder.

“Studying creation is a worship experience, and that’s what we do in chemistry and astronomy and everything else,” Yoder said. “For a Christian, we believe in creation. What is science? The study of creation – it is as important as scripture.”

Sophomore Curtis Oesch (Caldwell, Idaho) appreciates the willingness Yoder has to tackle difficult topics such as this with his students.

“In places where many people see conflict between Biblical teaching and science, Jim sees logical explanation that allows the two to be in agreement,” Oesch said. “He has told me more than once that there doesn’t have to be conflict and it doesn’t have to become a choice whether to believe the Bible or science. The two can coexist and even support each other if you read each one in the appropriate context.”

Throughout his fifty years on faculty, Yoder took several sabbaticals. Under Mennonite Central Committee, Yoder and his family traveled to Swaziland from 1979 to 1981 where Yoder taught at the University of Swaziland. He was then named a Fulbright Scholar in 2007 and returned to Swaziland. He also spent several summers and periods of sabbatical as an adjunct instructor at Bethel College (North Newton, Kan.), Tabor College (Hillsboro, Kan.) and Wichita (Kan.) State University.

But Yoder always returned to his home in Hesston.

“A teacher can only have an impact on a limited number of people no matter where they’re at, a big university or a small one,” Yoder said. “And so, if that’s the goal then it doesn’t matter where you teach.”

Yoder has seen many transitions during his time at Hesston, but the biggest changes? The students and technology.

In 1968, Yoder began teaching with slide-rules, the “old-fashioned calculator,” as Yoder called them, and mimeograph-graded tests. But with the introduction of calculators and advancement of computers, student interactions with science transformed. Yoder has also seen the effects.

“I don’t have to spend so much time in the lab or the classroom on tedium things and the details,” Yoder said. “Now I can focus more on concepts, on the bigger picture.”

As technology has changed, so too have Hesston College students.

“I walk around campus, and I hear the birds, and I see the trees, and I wonder how many students notice birds singing and the trees,” Yoder said. “Students don’t notice those things as much, and they’re not out as much as they used to be.”

While this changes the interaction of students in the classroom, Yoder still finds ways to connect with them in other areas on campus.

“Year after year, the flow of really nice students are gracious, friendly, forgiving people,” he said. “I just wish I could remember more of them.”

Oesch is one of those students fortunate enough to have Dr. Yoder as a teacher in his final year.

“Jim has taught me that the world that we live in is magnificently astounding simply because it works,” Oesch said. “In the classroom setting, Jim always wants to see his students succeed and so challenges them to achieve their full potential. This willingness to sacrifice time to ensure my success has helped me realize my potential and find passion in learning.”

Beyond the classroom, Yoder has had opportunities to maintain his love for theatre from his younger undergraduate days, as he has played a variety of roles in Hesston College Theatre productions, his final role being that of Dr. Stokes, a medical doctor who observes and checks on all contestants, in the college’s spring 2018 production of Hands on a Hardbody.

Perhaps the most meaningful culminating event for Yoder’s last year was leading a group from Hesston College to Shickley, Nebraska on August 21, 2017, for the total solar eclipse. There, in a village of 337, 450 people, including 75 Hesston college math, science, education and music students and about 90 college alumni and friends, joined students, faculty and staff of Shickley Public School and Shickley community members for an eclipse presentation that paired scientific explanation from Yoder with choral pieces by the Hesston College Bel Canto Singers.

“This rare, striking event that we were so fortunate to experience helps us recognize our place in the cosmos and that we are a part of, and connected to, the rest of the solar system, the Milky Way, and the universe,” Yoder said.

The mark Yoder has left at Hesston College that reaches so many from the past, will also continue to live on for future generations through the excellence he established in the chemistry program. But his decision to retire has not come without some hesitation in the last year.

“I get done with class and think, ‘Wow, why am I leaving?’ This is just so good,” Yoder said. “I’ve always preached this to people and myself: when you retire you should have something to retire from and something to retire to. I don’t have either one!”

As he continues to discover what the next chapter holds for him, Yoder notes that the impact of his work is seen best through his students, many who have established notable careers in science-related fields.

“That’s the legacy of a teacher,” Yoder said. “No matter where they are, their students go on and become bigger and better than they are.”