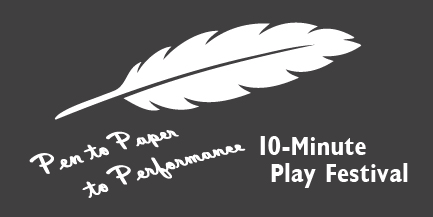 After positive reactions towards Hesston College’s first “Pen to Paper to Performance” playwriting festival in 2017, the event is continuing for a second year under the coordination of Theatre Director Rachel Jantzi.

Jantzi chose eight original plays from a large number of submissions that will be featured in the final showcase at 7 p.m., April 27 and 28, in the Keim Center Black Box Theatre on the Hesston College campus.

“I’m excited because the scripts are so varied,” Jantzi said. “The actors are truly being stretched to meet the needs of eight different shows. They have impressed me and I am looking forward to the audience getting to experience that with us.”

The featured plays in the final showcase are:

Each play runs about 10 minutes in length, and the event is rated PG for mild language. Tickets are $8 for adults and seniors, and $4 for students. Tickets will be sold at the door only starting at 6:15 each night. Doors will open at 6:30 p.m. Seating is limited, so early arrival is encouraged. Each playwright will receive a portion of the box office earnings.

A simplistic set will build cohesion between the eight contrasting shows, and sophomore theatre major Mariah Trible will direct two of the shows alongside Jantzi. A single ensemble of 13 actors, each taking on several different roles, will bring the shows to life.

“I am honored that these playwrights trust us to tell their stories,” Jantzi said. “Even if it may not be how they envisioned it as they wrote, they were brave enough to let it go and trust someone else with their words. That is a courageous act.”

Prior to the show on Friday, April 27, beginning at 6:30, there will be a 30-minute performance by On A Lark, Hesston’s improv comedy troupe led by freshman Colton Adams (Wichita, Kan.).