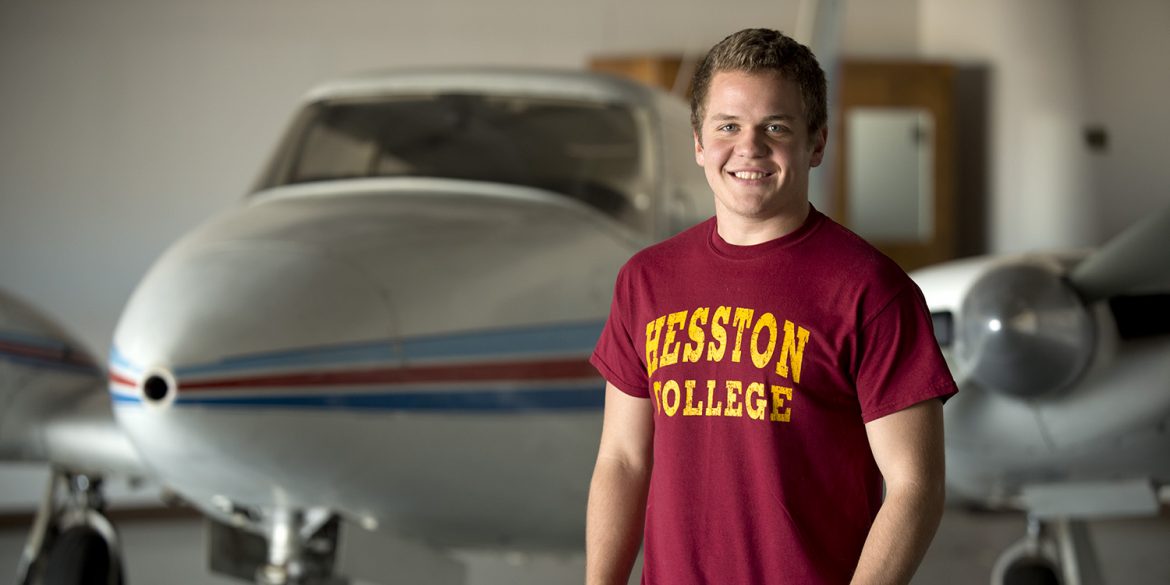 January 19, 2015, is a day that will forever live in the mind of Jordan Stoltzfus, a sophomore aviation student at Hesston College.

On that day, Stoltzfus survived total engine failure of an airplane, followed by an emergency landing, and lived to tell about it–an experience that not many pilots, seasoned veterans or otherwise, would ever be able to relate to.

Only four days prior to the accident had Stoltzfus, then a senior at Westview High School (Topeka, Ind.), taken his first solo flight in hopes of eventually attaining his private pilot’s license.

This love for flight took wing from a young age. Stoltzfus says he always dreamed of flying as a kid. From airshows with his dad to aspiring to be an astronaut in the third grade, becoming a pilot was truly “the dream.”

And so, New Horizons Aviation in Goshen, Ind., seemed like the perfect place to start aviation training. It would give Stoltzfus a head-start as he headed into Hesston College’s aviation program on a soccer scholarship for the 2015-2016 school year.

“It was a cold, January day,” Stoltzfus said. “I had maybe eleven flight hours under my belt and I was on my own.”

Soon after takeoff, the engine started causing trouble. The cause would later be uncovered: a chunk of ice in front of the air filter. That was all. But in the moment, all Stoltzfus could do was follow routine procedures and hope for the best.

The best didn’t happen, and soon Stoltzfus was proceeding with an emergency landing in his neighbor’s yard.

And then he blacked out.

“The next thing I remember was coming to and there was no glass broken, the cockpit was in one piece, and I wasn’t in any pain. I got up and walked away. It was a miracle.”

Awakening to find himself unscathed, Stoltzfus then saw his dad and neighbor hurrying over. 911 was on their way with an ambulance. But after a quick examination, Stoltzfus was given the okay and headed home, not a mark on his body to prove the accident had happened.

“It was a miracle–a God thing,” Stoltzfus remarks as he relives the accident in his mind.

Yet, even though his physical appearance had not altered, Stoltzfus’ emotional state, along with those of his parents, was a different story.

“I still get worked up talking about it,” Stoltzfus said. “The next couple of days [after the accident], I struggled with PTSD. It took pills to put me to sleep at night.”

“My mom would break down,” notes Stoltzfus.

And his dad? The day of the accident, he hadn’t even known his son was out on a flight. Putting the pieces together while running over to the scene of the accident was gut-wrenching.

It has been two years and counting since the accident, and Jordan Stoltzfus is only a few months from graduating from Hesston College with his aviation degree, having completed the private, instrument, commercial, and instructor/multi-engine courses.

When asked how he sees the accident affecting the kind of pilot Stoltzfus is becoming, Miller says, “This question has an ongoing answer as the kind of pilot Jordan is becoming continues to develop. His aviation experiences are strengthening Jordan’s personal character as he carries himself with professional confidence.”

And so, Stoltzfus continues to use the dramatic experiences of the past to set him apart as a pilot.

When asked how this experience has changed him, he quickly said, “You don’t know what it’s like until you fly solo and your engine quits. I had an experience that no one [in the Hesston aviation program] has had. That experience will help land me a job.”

And what’s after Hesston College for Stoltzfus? He chuckled and said, “I’ve got a job at New Horizons Aviation. I’m going back to where it all started.”

One more Lark has left his mark, and now heads for the skies.