Beloved Director of Nursing to step down following academic year 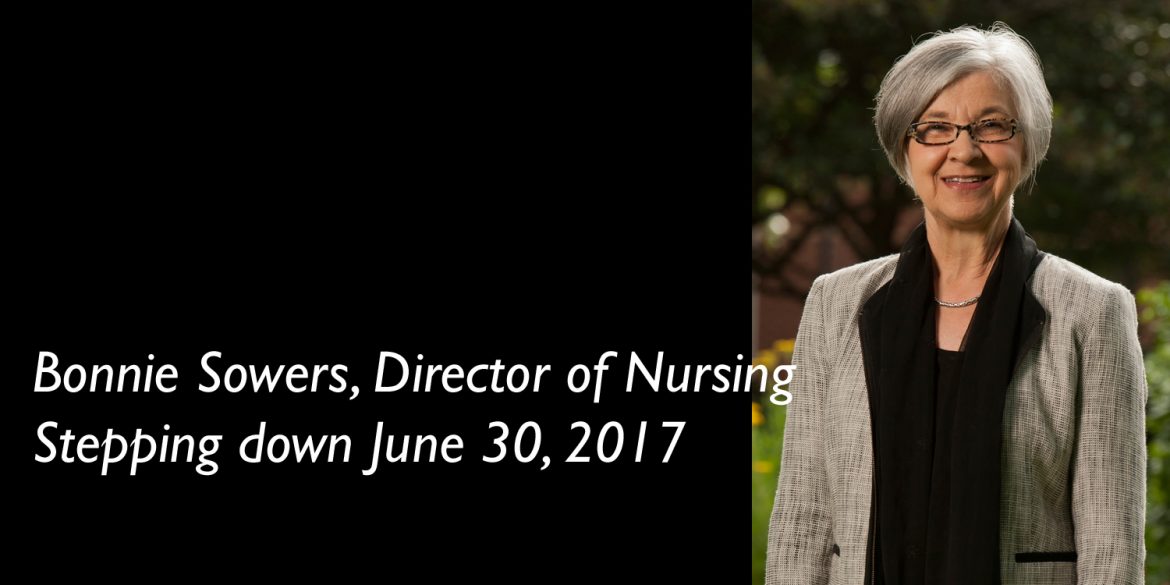 After 37 years as director of the Hesston College Nursing program, Bonnie Sowers announced that she will step down from the role on June 30.

In addition to her years as director, Sowers has served in other roles within the nursing program for a total of about 45 years of the program’s 50-year history.

“It is not an understatement to say that Bonnie is essentially synonymous with the nursing program at Hesston College,” said Brent Yoder, Vice President of Academics. “We will certainly miss the outstanding leadership and holistic care that she has brought to the program for many years.”

Sowers attended Hesston College for one year in 1966, the same year the college’s two-year associate degree nursing program was launched. After earning her bachelor’s degree in nursing from Goshen (Ind.) College, she returned to Hesston in 1970 to serve as nursing instructor. She spent one year at Ohio State University (Columbus) to earn her master’s degree, and then returned in 1975 to become the assistant director of nursing. She assumed the role of director in 1980 and has held the position continuously since 1985.

Under her leadership, Hesston College Nursing has established itself as a highly successful and respected program. In its 50-year history, more than 1,600 individuals have graduated from the program, with more than 98 percent of graduates passing the NCLEX-RN (National Council Licensure Examination for Registered Nurses) and becoming registered nurses.

Most recently, Sowers and her team of faculty and staff were instrumental in launching the college’s four-year Bachelor of Science in Nursing (BSN) program in 2015. An RN to BSN completion program was added in January 2017, and an LPN to BSN program will begin with the fall 2017 semester.

Sowers will end her tenure as director just following the college’s celebration of the 50th graduating nursing class, and the first graduating BSN class.

Nursing students and alumni regularly credit Sowers’ encouragement and guidance, along with that of other nursing faculty members, as formative in their nursing education and success.

“Bonnie has a quiet, respectful, Christ-like way of building relationships,” said Marcy Renollet, a 1995 Hesston College graduate who is now a unit director at Via Christi Health in Newton, Kan. “Throughout my nursing career, I’ve drawn on my memory of how Bonnie was present in our conversations, of her nonjudgmental attitude and her ability to see the positive in any situation.”

Sowers’ work has also reached beyond the nursing department to other areas of campus. She served as interim academic dean on two separate occasions, and as an associate academic dean for about 20 years.