AVDS equips participants with tools and responses for trauma and recovery 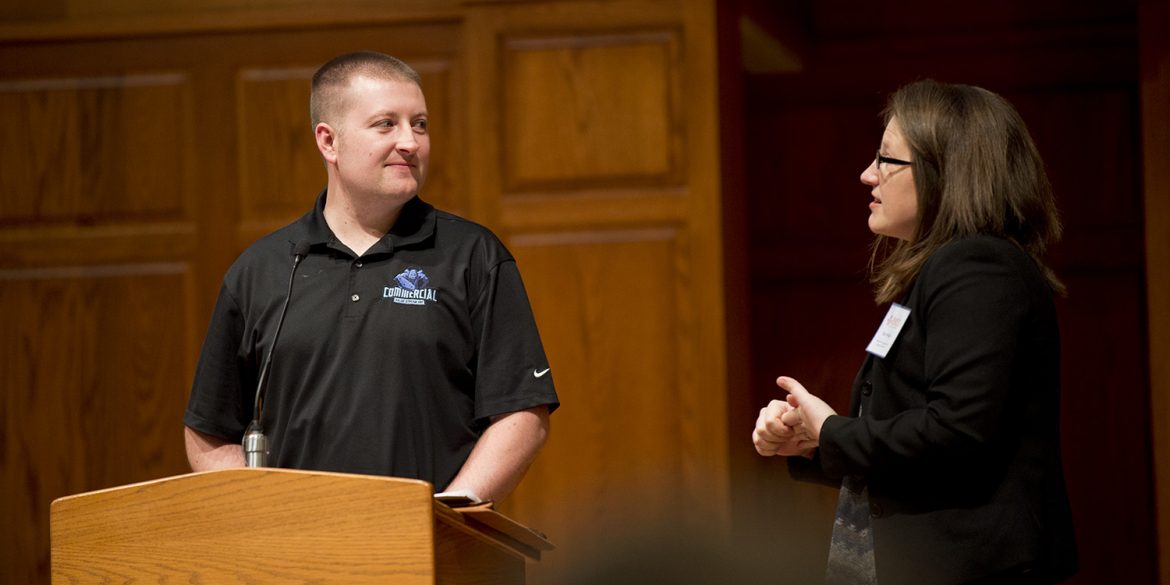 “The unthinkable does happen to us and to our families and to those around us.”

These were some of the opening words of Hesston College’s interim president, Ben Sprunger, at the kick off session for the annual Anabaptist Vision and Discipleship Series (AVDS) conference hosted on the Hesston College campus January 17 to 19. About 200 registrants including church leaders and a variety of other professions from eight states, and including Hesston College students from different fields of study, participated in the weekend activities with more attending free sessions and extra events.

Centered around the theme “When The Unthinkable Happens,” the conference took place just one week before the one-year anniversary of the mass shooting at Excel Industries in Hesston. But the idea of trauma goes far beyond one shooting. As a conference description said, “It can happen anywhere, including your community. It could be a tornado, domestic or sexual abuse, a mass shooting or something else. As Christ’s followers, we need to be ready and respond well.”

Minter asked, “What is your BHAG for Jesus?” One of hers includes STAR (Strategies for Trauma Awareness and Resilience) training, which she led as a bonus event to the weekend conference on Feb. 20, to a full roster of 50 registrants.

“We respond to trauma because it is hopeful work, walking alongside people going through trauma expedites restoration and, most importantly, because trauma is never the end of the story,” Wiebe said.

Wiebe’s outlines served as springboards for discussion throughout that evening and into the weekend as audience members were encouraged to share about personal experiences with trauma with those around them.

She also encouraged participants to remember that trauma and healing are like beauty – they are in the eye of the beholder.

“What feels like trauma or healing to one person, may not to another,” Wiebe said. “Everyone experiences trauma and healing in different ways and at different paces.”

With these ideas brewing, members of the conference came back Saturday morning for Collective Trauma Part 2: Building Resilience with Rev. Dr. Wiebe and “Reconciliation: An Anabaptist vision for trauma-informed, resilience-oriented and restorative-focused faith communities,” by Dr. Minter.

The afternoon consisted of seminars led by a variety of mental health and social work professionals, pastors and Hesston College faculty. Also scattered throughout the weekend were personal stories of overcoming trauma by people who lived through the worst, including a Wichita father who lost his son in a drive-by shooting, a survivor of the devastating 2007 Greensburg, Kan., tornado and Adam Miller, a survivor of the shooting at Excel.

As Miller reflected on his experience and the last year of recovery, he noted that there have been “lots of ways I’ve seen God at work.”

“People at work who don’t claim a faith come up to me and say there is something different about me in how I’ve reacted and responded to what happened,” Miller said. “It’s been encouraging to know they see that in me.”

Janelle Schmucker, a Hesston College sophomore and social work major who was actively involved in the weekend noted her reactions: “I really enjoyed it as a whole. I learned so much on how trauma can affect the development of personalities. It was fascinating.”

“Laughter is not an immediate fix [to trauma], but it is part of the healing,” said Swartz. “And when you are able to do that with a community, you are connecting together in a way nothing else does.”

Recognizing that the topic of trauma is not easily answered, the Anabaptist Vision and Discipleship Series will look to take on part two of this next year during the 2018 conference.

For now, conference participants headed home equipped with the mindset and basic skills to deal with trauma because when the unthinkable happens, it is important to know how to respond.

“Responding to trauma is an art,” said Wiebe. “Your experiences matter, you are not alone and the people around you are hopeful, too.”

by Mackenzie Miller and Rachel McMaster