Mentoring relationship creates music with a message of peace and hope: Instructor and student to take musical talent to Indonesia 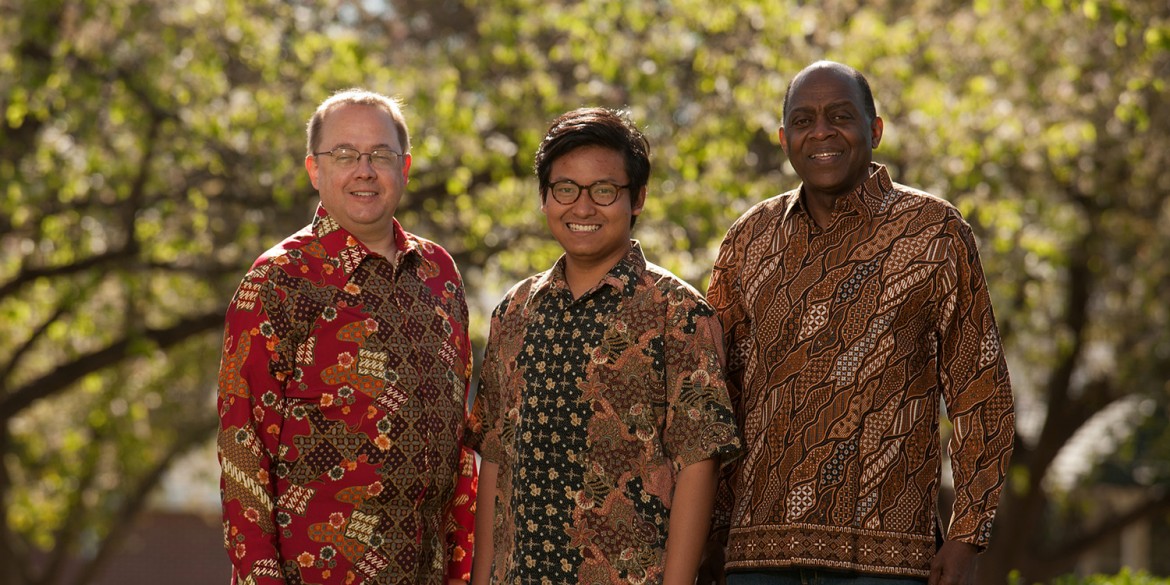 When an earthquake devastated Galed Krisjayanta’s home on the south coast of Java Island, Indonesia, in 2006, he didn’t respond as most 10-year-olds might have. While many children would understandably stand by as their parents managed survival and recovery efforts, Krisjayanta took the first steps toward his future pursuits of music performance and humanitarian work.

In the face of the devastation, Krisjayanta, supported by one of Indonesia’s largest Christian non-governmental organizations, recorded a music album titled Alam Sisa, which translates to “our nature and what’s left of it,” encouraging resilience, survival and a refusal to give up because a brighter future awaits those who work for it. The album’s proceeds were directed for charity in the recovery process.

“That was the first time I realized music could have a life-changing impact in society,” said Krisjayanta.

Seven years later, Krisjayanta arrived at Hesston College where he met Tony Brown – an instructor, mentor and friend with whom he shares many commonalities. Brown, a Hesston College social science instructor, artist in residence and internationally recognized baritone, uses his music to spread messages of peace and social justice across the world through his organization, Peacing It Together Foundation.

The two men have developed a close bond during Krisjayanta’s two years at Hesston, and this May, following Krisjayanta’s graduation, they will travel together to Indonesia along with accompanist and Hesston music faculty member Ken Rodgers, for a two-week Interfaith Concert Tour May 23 to June 8.

A concert tour is nothing new for Brown who frequently travels around the globe using music to draw people together across the divides of race, culture and religion. But for Krisjayanta, the opportunity to perform with and learn from a seasoned professional like Brown, is another step toward realizing the dreams of his 10-year-old self.

“The tour will give us the opportunity to deliver words of peace and humanity to the people of Indonesia, as well as introduce audiences to classical and African-American music that is not as familiar to them,” said Krisjayanta.

Since his arrival at Hesston, Krisjayanta has been well known on campus and in the community for his outstanding vocal talent. He is a member of the premier vocal ensemble, Bel Canto Singers, as well as a solo performer at formal and informal events across campus and in the community, including singing regularly at Whitestone Mennonite Church in Hesston. Krisjayanta placed at the annual National Association of Teachers of Singing Regional Vocal Competition both of his years at Hesston. As a freshman, he won first place in the Freshman Men’s Classical Division and was the first Hesston College student to bring home a first place win since 2003. He earned second place in the Sophomore Men’s Classical Division in 2014. He also starred as Professor Bhaer in the college’s spring 2015 production of the musical Little Women.

“I never really believed I would be a music performance major, but Hesston College and the city of Hesston have been my stage to start my singing career in the United States,” said Krisjayanta. “I realize that God gave me the talent to sing for a reason – to spread good music and to serve people through my singing.”

Krisjayanta recalls the idea for collaboration with Brown in Indonesia starting as early as his first year at Hesston. Following a Social Welfare class session, Brown engaged Krisjayanta in his goals for vocal performance and proposed the idea of working together.

“I told Tony about my passion for singing and helping people, and he said, ‘Then we are on the same page, Galed,’” recalled Krisjayanta. “Tony started as just my teacher, and now he is my singing partner and brother.”

With the help of Krisjayanta’s father, Sigit, a humanitarian social worker who works in the public health, social work and disaster management arenas, the tour plans were set into motion. Their program will be shared with various faith congregations, choirs and others.

“We hope this venture will bring people together across divides and help them find common ground,” said Brown. “In keeping with the mission of Peacing It Together Foundation, we will use our music in Indonesia as a catalyst for peace and social justice.”

Hesston College hosted a benefit concert for the Indonesia tour on April 11, which featured Krisjayanta and Brown, as well as other Hesston College ensembles. Financial gifts of support for the performers and trip expenses continue to be welcomed. Gifts may be sent to Hesston College Alumni and Church Relations, Box 3000, Hesston, KS 67062.