Students help rebuild “the little town too tough to die” 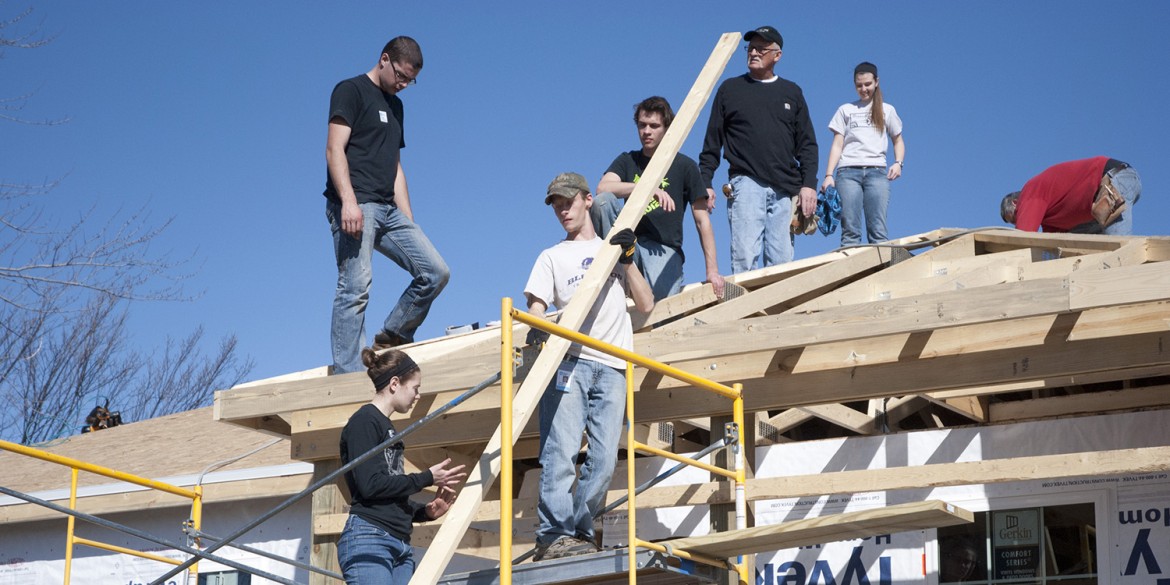 With Main Street completely flattened and only the headstone of the public school remaining, Pilger, Neb., is still “the little town too tough to die.”

The nickname was started long before two EF4 tornadoes struck the town on June 16, 2014, and had nothing to do with any disaster, but the motto has now become an inspiration as Pilger begins to rebuild. It is posted on a small hand-painted sign leaning up against the town bulletin board outside the trailer that temporarily serves as the town hall. The phrase is heard echoing throughout the community, even for those who have only been in town for a couple of days.

On March 8, eight Hesston College students led by Russ Gaeddert, Disaster Management Program director, traveled north to Norfolk, Neb. The students were there to volunteer with Mennonite Disaster Service (MDS), which was invited to Pilger to help rebuild homes as the town recovers from what many may have considered to be certain death.

With a population of 378 when the tornadoes struck, more than half of Pilger’s homes and buildings were destroyed or significantly damaged by the tornadoes. The Pilger Store, village office, senior center, farmer’s cooperative, post office and St. John Lutheran Church were all heavily damaged or leveled.

While many students choose to head to relaxing locations during spring break week, these service-minded students chose a different kind of experience.

“I think working in Pilger gave me just as much satisfaction as going to Florida or somewhere more typical for spring break,” said Garretr Woelk (Goessel, Kan.). “It was good to serve with like-minded people as we helped rebuild and restore hope.”

“It’s one of the best experiences I’ve had,” added Rose Yoder (Bellefontaine, Ohio).

MDS has committed to building five homes so far in the Pilger area. Three of the homes are now enclosed and shingled, and two of the homes are almost completely sided. The combined group of 27 people was divided and worked at four of the homes throughout the week.

Each day began with group devotions and ended with a daily report and reflections. Roofing, shingling, siding, insulation and the beginning of drywall characterized the week’s work. Four Hesston students helped the long-term recovery team call the affected residents to see whether additional help is needed.
Though some volunteers had almost no previous construction experience, MDS crew leaders and experienced volunteers provided training. The Hesston students returned fairly confident in roofing and siding homes.

“I think my favorite part of the trip was on my first day at house number two,” said Charissa Graham (Princeton, Ill.). “Even though most of us had no idea what we were doing on the roof, and even though we didn’t really know the other volunteers, we all worked so well together.”

In the evenings, the group traveled the 20 miles back to the Norfolk City Auditorium and enjoyed the accommodations in converted office spaces, but especially the gym. When not used by Norfolk community members, the gym was heavily used by MDS volunteers for volleyball, basketball, Frisbee and card games. These activities, along with music in the evening, helped the volunteer groups to build community.

MDS focuses on forming relationships, and just as Hesston students had the opportunity to get to know those from MacGregor, Manitoba, they also had the incredible blessing of getting to know Pilger residents.

“What I’ll remember the most is all the wonderful people we encountered who were so kind,” said Desiree Corona (Newton, Kan.).

Sitting down to a lunch around one table with the Pilger community was a highlight of the week for the students. Site directors Wayne and Carole Stucky say the community has pulled together even through making a weekly meal for MDS and are serving volunteers in any way they are able.

One man in Pilger drives around the town handing out Dum Dum Pops to the community and MDS volunteers. He has been known as “the sucker man” in Pilger for a while. The closest thing the small town has to a mayor has lent many tools to the MDS crew to make work go faster. Miss Alice, homeowner of what MDS crew members refer to as “House 1,” brings her famous cookies to the MDS worksites at least once a week.

As they left Pilger after many hugs and hard goodbyes, Hesston students felt as if they had become a part of the MDS volunteer family and the “little town too tough to die.”