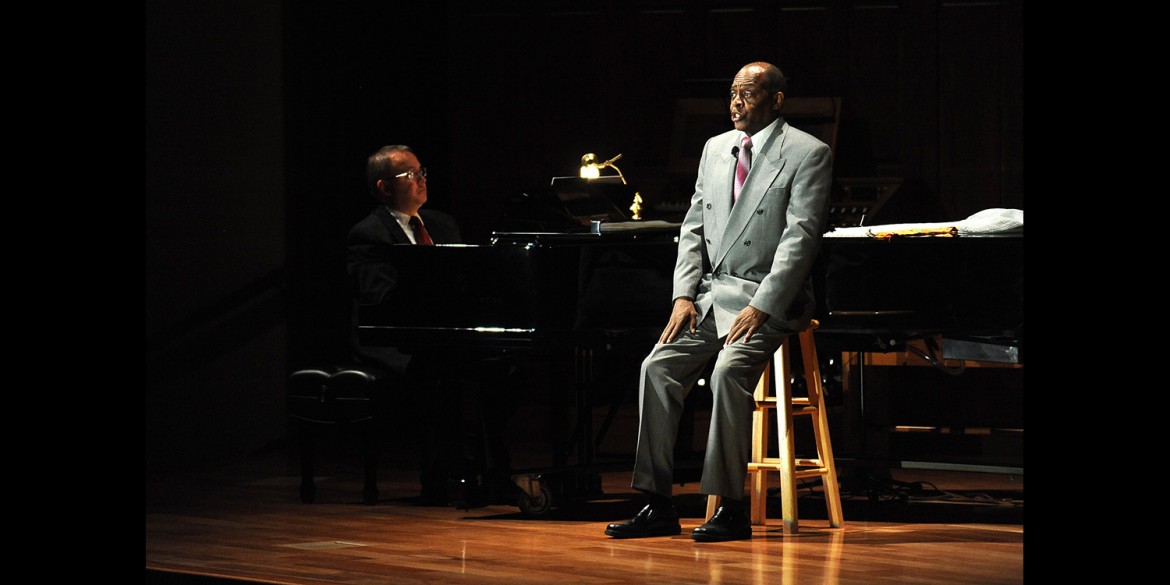 Levi Zook stopped in his tracks when Tony Brown greeted him in Pennsylvania Dutch on a train bound for Albuquerque.

Zook, an Amish man from New Holland, Pa., likely never expected to hear the language spoken predominately in Amish communities so far from home and from a black man. Brown, an African-American Mennonite from Hesston, Kan., quickly revealed that the two men share religious historical Anabaptist ties. Though the simple greeting exhausted the extent of Brown’s Pennsylvania Dutch, it led to a friendship and sharing of worlds – that of the Amish, Mennonite and African-American cultures.

After Zook recovered from his initial surprise, the men struck up a conversation about their lives. Brown shared about his work as a sociology instructor and artist in residence at Hesston College, as well as his travels around the world as an internationally recognized baritone and peace advocate. He then told Zook about his friend Dwight Roth’s historical fiction book “Kinship Concealed: Amish Mennonite and African-American Family Connections,” co-authored with Sharon Cranford, that documents the historical multi-racial lineage of 18th century Amish brothers John and Jacob Mast.

The conversation piqued Zook’s interest, and he contacted Roth to purchase a copy of “Kinship Concealed,” which further fed his curiosity of enslaved Africans’ experience. Brown and Zook stayed in touch through phone calls, and knowing Brown often shares the African slave experience through spirituals, Zook invited him to present to his congregation sometime when Brown traveled to Pennsylvania. While on a trip representing Hesston College, Brown made time to accept Zook’s invitation, accompanied by Dallas Stutzman, Hesston College Director of Church Relations.

In October, about a year after their initial meeting, Brown was in Zook’s bishop’s home to share about the experiences of enslaved Africans with about 30 Amish people from the district congregation. The presentation was a meaningful growth experience for both groups.

“I was honored to be invited to share the African slave history in a culture that doesn’t generally open themselves to the outside,” said Brown.

Brown shared historical information and further illustrated the slave experience by singing spirituals. He also emphasized that both the enslaved Africans and the Amish have a common, binding link – an ancestry of suffering. In return, the Amish crowd sang two songs in low German.

Brown says many of the stories and experiences of African slaves are not well known to the Amish, which is reflective of their separateness and culture. But Brown wanted his presentation to be more than a history lesson. He wanted to emphasize that regardless of experiences, everyone can connect around a common humanity.

“The time I spent with these Amish friends was meaningful to me, and I was pleased when Levi commented that it was a night everyone would remember,” said Brown.

Brown has dedicated his life to education and building bridges across social and cultural divides. He connects with countless Hesston College students and meets with political and religious leaders in countries around the world as a peace advocate through music. He also travels for Hesston College with the “Common Threads” program, which he performs with Hesston history instructor John Sharp, that shows the intersection of stories of Anabaptist martyrs and African-American racial suffering. His one-man show “I Go On Singing: Paul Robeson’s Life in His Words and Songs,” is an original tribute to the popular African-American performer, and civil rights activist.

Though he has interacted with Amish people in the past, the experience allowed for relationships to form across barriers and for those present to learn from one another.

“Whenever I can get into a world not my own and make a profound connection, I’m blessed,” said Brown.

Editor’s note: In order to respect the privacy and convictions of the Amish congregation, no photos were taken during Brown’s visit.