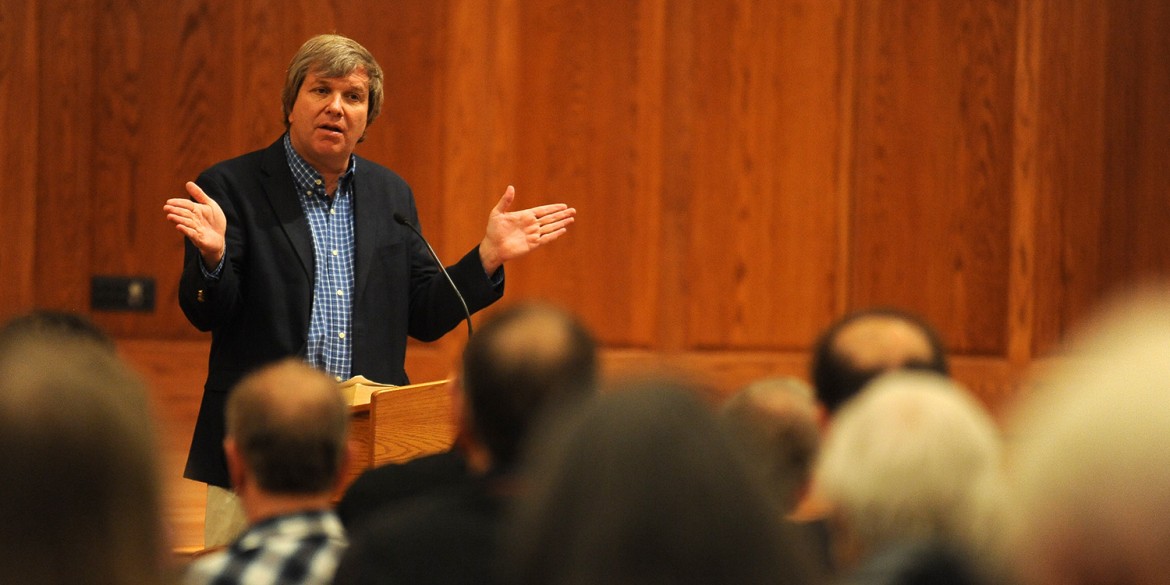 How do followers of Jesus Christ pursue nonviolence in a world full of violence? That was the question explored by the 170 participants at Hesston College’s Anabaptist Vision and Discipleship Series weekend Feb. 13 to 15.

Dear emphasized nonviolence as the “vision of the heart that sees every human being as your brother and sister.” Dear, an active peacemaker himself, shared stories of the numerous times he publicly acted for nonviolence, including more than 75 arrests for acts of civil disobedience.

“In a country and world filled with evil, the conference provided an opportunity for participants to name their fears and seek tangible ways to fulfill Christ’s command to love our enemies and return love for hate,” said organizer Dallas Stutzman, director of Alumni and Church Relations. “This is the only response that will actually change life’s difficult circumstances, both in our neighborhoods or across the globe in international conflicts.”

Participants were invited to take action towards nonviolence in several ways, including writing letters to elected officials and/or local media outlets and taking a Vow of Nonviolence.

“The invitation is to be nonviolent to ourselves, to all others and creation, and to be part of the global movement of nonviolence,” said Dear. “This is an on-going journey towards the fullness of life, where every outcome can be healing and transformative.”

Breakout sessions gave participants the chance to hear about peace in different contexts and a variety of backgrounds and faith traditions. Among the breakout presenters was David Works, author of Gone in a Heartbeat, which chronicles his and his wife’s journey to finding forgiveness in the tragedy of losing their two teenage daughters to a gunman’s attack on their Colorado Springs Church. Jason Boone (Raleigh, North Car.), coordinating minister for the Peace and Justice Support Network (PJSN) of Mennonite Church USA and Mennonite Network, presented on helping returning veterans from the wounds of war. Hesston College Mennonite John Murray joined Sohaib Mohiuddin (Wichita, Kan.), a member of the Islamic Society of Wichita, for reflection on how interfaith efforts can make a difference. Michelle Armster (North Newton, Kan.), transitional executive director of Mennonite Central Committee Central States, raised the question of what justice looks like. Mary Herr (Hesston, Kan.), co-founder of The Hermitage Retreat Community (Three Rivers, Mich.) led a time of silent reflection.

Hesston College faculty members Ken Rodgers and Tony Brown led worship in the Taizé tradition, a style created by a monastic community in Taizé, France. Participants were guided through a service of scripture reading, music, and times of silence and reflection.

Ted Swartz and Tim Ruebke of Ted & Company TheaterWorks (Harrisonburg, Va.) presented the satirical drama I’d Like to Buy an Enemy Feb. 14. The drama spoke of peace, conflict resolution and justice in a world focused on military presence.

“Returning to Hesston College for the AVDS conference was a rejuvenating and gratifying experience,” said Timothy Bixler, Indianapolis, a 2013 Hesston graduate and Goshen (Ind.) College Student. “John Dear’s stimulating call towards an active approach to peacemaking is one that will hopefully remain forever embedded within the hearts and minds of the citizens of God’s eternal kingdom.”