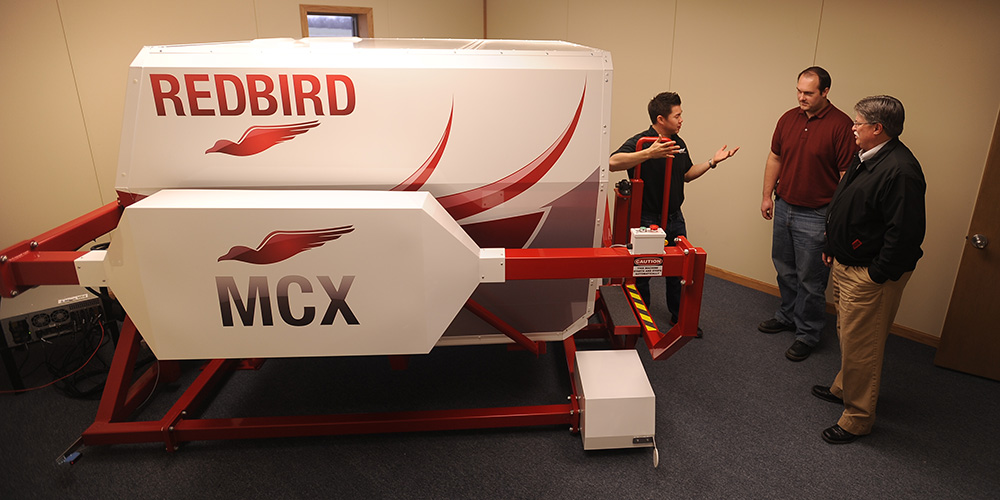 Hesston College Aviation and Air Traffic Control students will fly high while planted firmly on the ground when they return from Christmas break in January. As part of the college’s Delivering the Promise capital campaign, Hesston College received a generous anonymous gift which helped to fund a Redbird MCX C182 G1000 GFC700 flight simulator. The full-motion simulator was delivered Dec. 18 and replaces a flight training device that had been part of the program for 12 years.

“We are grateful for the generous gift that helped us purchase such a technologically advanced piece of equipment that will help the Aviation program, students, faculty and staff in such an important way,” said Yvonne Sieber, vice president of Advancement.

The Redbird simulator is a full-motion device geared toward Crew Resource Management and two-pilot cockpit training with single and multi-engine configurations. It provides real-world situational experiences as students learn to operate in the pilot/copilot environment most common in the aviation industry.

“The new simulator will make Hesston College Aviation a stronger program,” said program director Dan Miller. “With equipment as sophisticated as this, students can be presented with a variety of scenarios, including emergency situations, as represented by a Technically Advanced Aircraft.”

The anonymous gift used to help purchase the simulator was given to the college in honor of Wilbur Bontrager, Middlebury, Ind., an alumnus who studied aviation during his time at Hesston in 1973 and a dedicated supporter of the college. Bontrager, who serves as member of the Hesston College Board of Overseers, is CEO and Chairman of the Board of Jayco, Inc., one of the world’s leading recreational vehicle manufacturers.

As compared to the flight training device it is replacing, the simulator is the program’s first full-motion device, as it can pitch up and down and roll left and right simulating the movement of an airplane. The instrumentation is all behind a glass panel, consistent with modern aircraft, and the instructor co-pilot seat is equipped with enhanced computer capabilities to offer a wider range of flight scenarios.

“We will be able to elevate our lesson plans to match the variety of learning options the simulator provides,” said Miller. “Students will become stronger aviators and gain a higher level of professional maturity during their time at Hesston College.”

The Redbird simulator joins a fleet of two no-motion flight training devices that will remain with the program, giving students procedural and technique training before stepping into the larger device.
Hesston College’s Aviation program has more than 50 students enrolled for the 2012-13 year and has trained more than 700 pilots since the program was started in 1970. Air Traffic Control was added as a plan of study in 2010 as part of the Federal Aviation Administration’s Air Traffic Collegiate Training Initiative and is the only program in Kansas and one of 36 nationwide with FAA approval.

In addition to the simulator, the Delivering the Promise campaign, which was launched in 2012, is also raising funds for a new airplane, avionics upgrades on existing planes and a facility remodel at the college’s hangar and office at the Newton City/County Airport, upgrades to campus pianos, the remodel of the performing arts building, Northlawn, two new tennis courts and a new campus entrance.