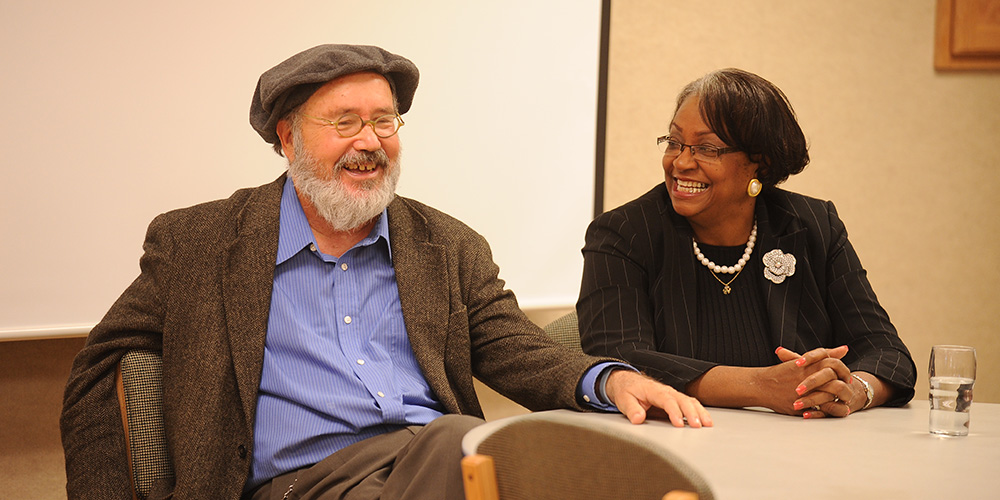 It is not uncommon for people to discover new relatives at Hesston College. With ties to the Mennonite faith tradition and many of the students, faculty and staff coming from the same faith background, the branches of many family trees run all across campus.

Sharon Cranford, however, did not expect to find any cousins at Hesston College. As an African-American Baptist woman teaching at a college from a predominately white, European church tradition, common blood lines were the last thing she expected to find. But the discovery of just that led her to co-author a book, “Kinship Concealed: Amish Mennonites/African-American Connections” with her new-found cousin, Mennonite-Episcopalian Dwight Roth.

The book is historical fiction – documenting the historical multi-racial lineage of Amish brothers Jacob and John Mast who immigrated from Switzerland to Philadelphia, Pa., in 1750 with a fictional story line.

Jacob was the first Amish bishop to be ordained in the United States and had an expansive group of descendants in the Conestoga Valley of eastern Pennsylvania. His brother John left the Amish church and moved south during the time when slavery in America was at its peak. His descendants became Methodists and Baptists and include slave owners and slaves.

“Discovering this family connection and writing the book has expanded my view of family,” said Roth. “For many people, kinship systems, ancestry and the definition of family may be much broader than we realize.”

Cranford and Roth were both teaching in the social science department at Hesston College in 2004 when they uncovered the connection that went further than common academic pursuits.

Overhearing a conversation Cranford was having with another colleague and mentioning her great grandmother’s maiden name of Mast, Roth interjected that his mother was also a Mast. He went on to explain that Mast is a common Amish Mennonite name and his own grandfather was an Amish Mennonite bishop.

Roth, who taught at Hesston from 1973 to 2010, had an interest in his family’s genealogy and asked a few questions of Cranford to see if they might stem from the same Mast branch. When Cranford answered Roth’s questions correctly, the two made their way to the college library to further explore their unexpected discovery in the C.Z. Mast Geneaology book, which covered the family history from 1750 to 1909. There, their suspicions were confirmed when they found both family lines.

“From the moment I first came to Hesston, I felt comfortable,” said Cranford, who taught at Hesston from 2002 to 2007. “I was raised with many of the principles and values of this culture, but would have never made the connection. It was wonderful to find out there was a kinship and reason I felt so comfortable. I believe our discovery was meant to be and this story was meant to be told.”

It was several years after their discovery that Cranford and Roth decided their family’s story needed to be told. Both set out on research trips to the areas where their families originated – Pennsylvania for the northern Amish Masts and east Texas and North Carolina for the southern Masts – to talk with relatives still living in the area and visit cemeteries and other historical family sites.

The Mast family became multi-racial when John’s grandson Reuben, a slave owner in North Carolina, fathered a child with a slave girl. The child was Cranford’s great great grandfather, Charley Mast, who was ripped away from his mother as a baby and sold to his uncle, Reuben’s brother John.

Throughout the book, Cranford and Roth use imaginative history to look into what their ancestors’ lives may have been like – their struggles, pain, fears and celebrations.

“I have felt my great great great grandmother’s presence – Charley’s mother – as I have gone through this whole process,” said Cranford. “As a slave, not much is known about her, but as a mother myself, I can empathize with what it must have been like to have her child torn away. Writing about it has calmed my spirit. Our ancestors propel us. Because of that compelling spirit, they drive what I say and feel.”

For both authors, writing their ancestors’ stories have been a personal experience full of growth and understanding.

“This has been a profoundly spiritual and emotional experience for me, which is why I think it is about something larger than Sharon and I meeting,” said Roth. “Our ancestors wanted this story to be told.”

Aside from telling an interesting and unexpected story, Cranford and Roth hope their book will encourage others to be open minded to the realities of bloodlines that may exist even in their own families, but in an even broader sense, to realize how connections across races exist.

“I hope our readers will recognize the strange American phenomenon about color and how tied up we are in that,” said Cranford. “I hope they will take a more internal look at ‘self” and who we all are as a people.”

“Stories like this have happened throughout history and continue to occur, but people don’t want to talk about it,” said Roth. “The complexity of kinship is often the elephant in the room, but we have decided we are going to talk about it.”

“Kinship Concealed” is currently being reviewed by publishers and Cranford and Roth hope that their family’s story will be available to all readers soon.