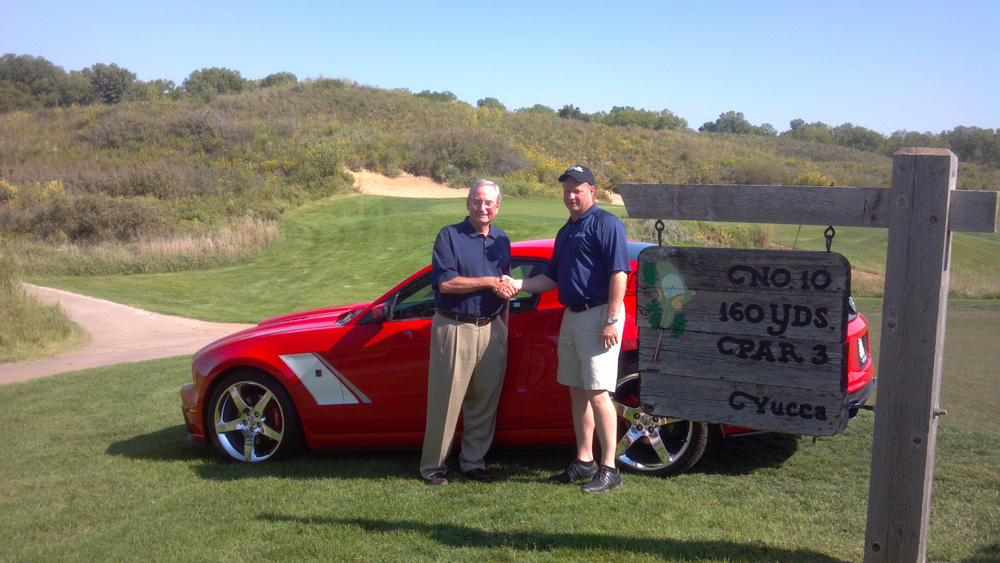 One lucky golfer at Hesston College’s 25th annual Kansas Golf Benefit at Prairie Dunes Country Club in Hutchinson, Kan., on Sept. 18, may not have had the best score of all 60 golfers, but he walked away with the most exciting prize.

Tom West of Wichita was participating in the benefit to raise money for student scholarships when he connected perfectly with the ball on hole 10 and sunk a hole-in-one.
That once-in-a-lifetime shot won him a victory red 2013 Roush Stage 3 Ford Mustang, donated by Mel Hambleton Ford of Wichita.

For car lovers, the car is something special. Named for Jack Roush Motorsports, owner of several NASCAR cars, the Mustang has special Roush suspension, an engine with more than 500 horsepower and is one of only four made.

Every year for the past 25 years, the golf benefit has offered a car as a prize for a hole-in-one, but this was the first time anyone won the car.

This year also marked the 25th and final year that the golf benefit was organized by Hesston alumni Orvin and Peggy Miller of Hutchinson. They have recruited golfers, sponsors and prize donations with all proceeds raised going to their alma mater for the Hesston College Annual Fund, 100 percent of which provides institutional grants and scholarships as financial aid.