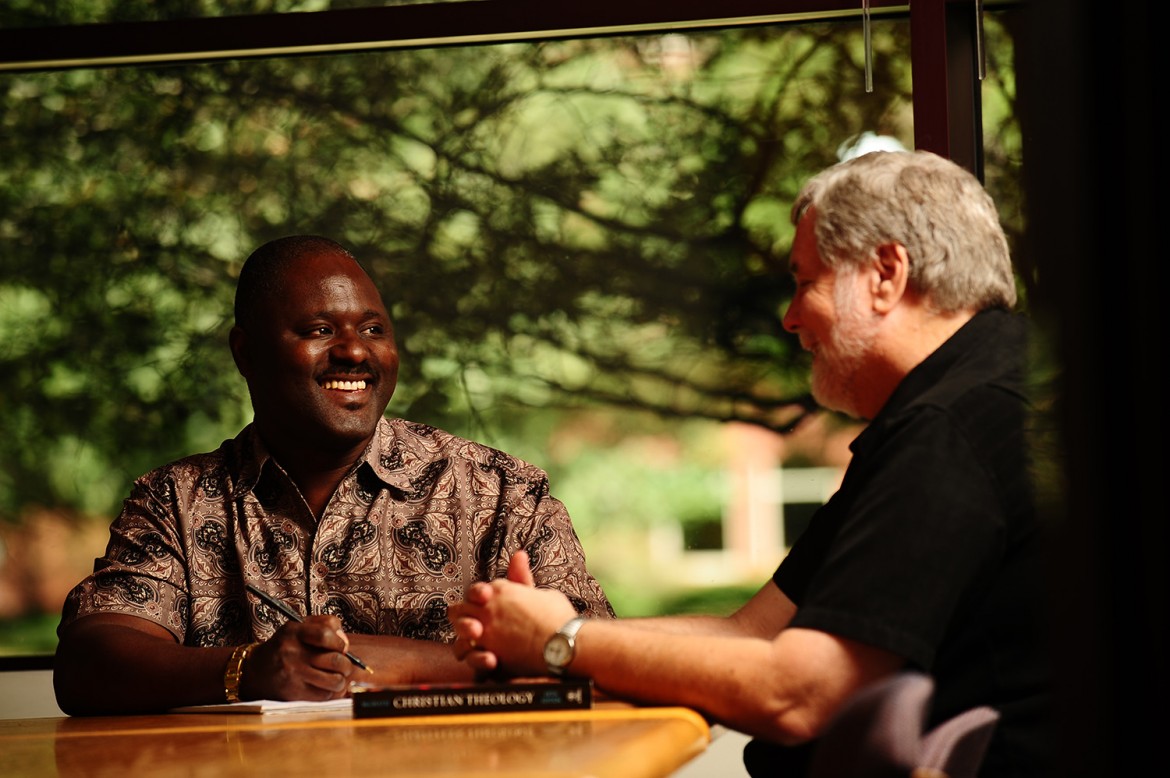 A civil war following independence from Great Britain in 1979 left many people in Moyo’s home country of Zimbabwe fleeing for safer environments. Moyo, who was a teenager, was left to live alone, wondering daily if he would live to see the next day.

“One day I found a small piece torn from a Gideon’s Bible,” recalled Moyo. “It was from Psalms 61 – ‘Hear my cry, O God, listen to my prayer. From the ends of the earth I call to you, I call as my heart grows faint; lead me to the rock that is higher than I’ (NIV). I prayed, ‘God, if you save my life, I will work for you.’”

Now, in his final year of Hesston College’s two-year Pastoral Ministries Program, Moyo finds the power of community is helping him fulfill the promise he prayed almost three decades earlier.

In 2006 Moyo unknowingly took the first steps that would lead him to Hesston College.

Political unrest in Zimbabwe was still a daily concern. The government was destroying the homes of poor people, leaving many displaced. Moyo was working as youth director at a church and serving as the chairman for an interdenominational organization helping those affected by their government’s actions.

As the political situation worsened, Moyo left Zimbabwe for the United States where he met requirements for political asylum. His family – wife Sue, son Lincoln and daughter Linda – joined him in 2009.

While still in Zimbabwe, Moyo had met Fremont and Sara Regier who worked with Mennonite Central Committee. The Regier’s had returned to the states as Fremont battled an illness. After he passed away, Sara asked Moyo to bring the funeral meditation.

“I didn’t think I would be able to bring a good message,” said Moyo. “I tried to find a way to say no. I told her I couldn’t get off work.”

But the week of the funeral, Moyo broke his arm in a bicycle accident which gave him a few days off of work. He agreed to speak at the funeral.

He was later working for a security company at Hartsfield-Jackson Atlanta (Ga.) International Airport when he again received a phone call from Sara. She told him about Hesston College’s Pastoral Ministries Program and encouraged him to go.

“I was humbled that she thought of me, and I was reminded of the promise I made when I asked God to save my life,” said Moyo. “Coming to Hesston felt like the right thing to do.”

It did not take Moyo long to find a home in the Hesston College community as he interacted with traditional students and his non-traditional peers in the Pastoral Ministries program. The diversity and variety of life experiences among the student population allows each person to learn from another.

“Ron brings a depth of life experience to the Pastoral Ministries program and to the Hesston College community,” said Tim Lichti, director of the Pastoral Ministries program. “Students across the age spectrum benefit from hearing about his life experiences, not only from a cross cultural standpoint but because of the maturity of his convictions as well.”

Moyo fully embraces each interaction he has on campus, viewing each experience as an opportunity to expand his community.

“We have a saying in my culture – ‘I am because we are,’” said Moyo. “It addresses the value of other people, of being communal and relating with one another. I see this saying in my entire life journey. If I hadn’t related with people when I had, I wouldn’t be at Hesston College. There is so much we miss living in our own secluded world.”

It doesn’t matter that some of his instructors are younger than him or that most of the students in his general education classes are young enough to be his children, Moyo is using his time at Hesston to enhance his spirit of service and foster the gift of ministry the MCC worker recognized in him.

“I am learning a lot from the people here,” Moyo said. “I am grateful that I am respected and accepted by the students and professors. Belonging to a community means you not only learn but are expected to give in order to build up the community.”

The Pastoral Ministries program was launched at Hesston College in the fall of 1985 as a way for non-traditional students to receive formal training in congregational leadership. The program has trained 135 graduates in its 26 years, and while not all students go on to serve in pastoral roles, the program allows them to discern their call to ministry.

“This program is designed for non-traditional students who do not see four years of undergraduate studies and three years of seminary as a viable option for responding to their call to ministry,” said Lichti. “Students can discern their calling here. For some it is service in pastoral leadership within the church; others end up in chaplaincy or a social work role. This program exists as a vehicle for putting the sense of call into practice.”

Moyo will graduate from the program and from Hesston College in May, and while he has no solid plans yet for his future, Lichti says his options are far from limited.

“Ron has tremendous potential to provide sustained leadership to the church or wider society,” said Lichti. “His vision and gifts transcend cultural boundaries. Ron came to Hesston already knowing his calling. The program is helping him sharpen his ministry skills.”

Ultimately, Moyo hopes to carry the knowledge he has gained back to his hurting country. He acknowledges that because of his political asylum he may not be able to help Zimbabwe directly – at least until he receives word that it is safe to return. Until then, he will equip others with his passion for people and community.

“Hesston has empowered me and instilled me with confidence. I want to take these lessons and use my passion to empower others.”