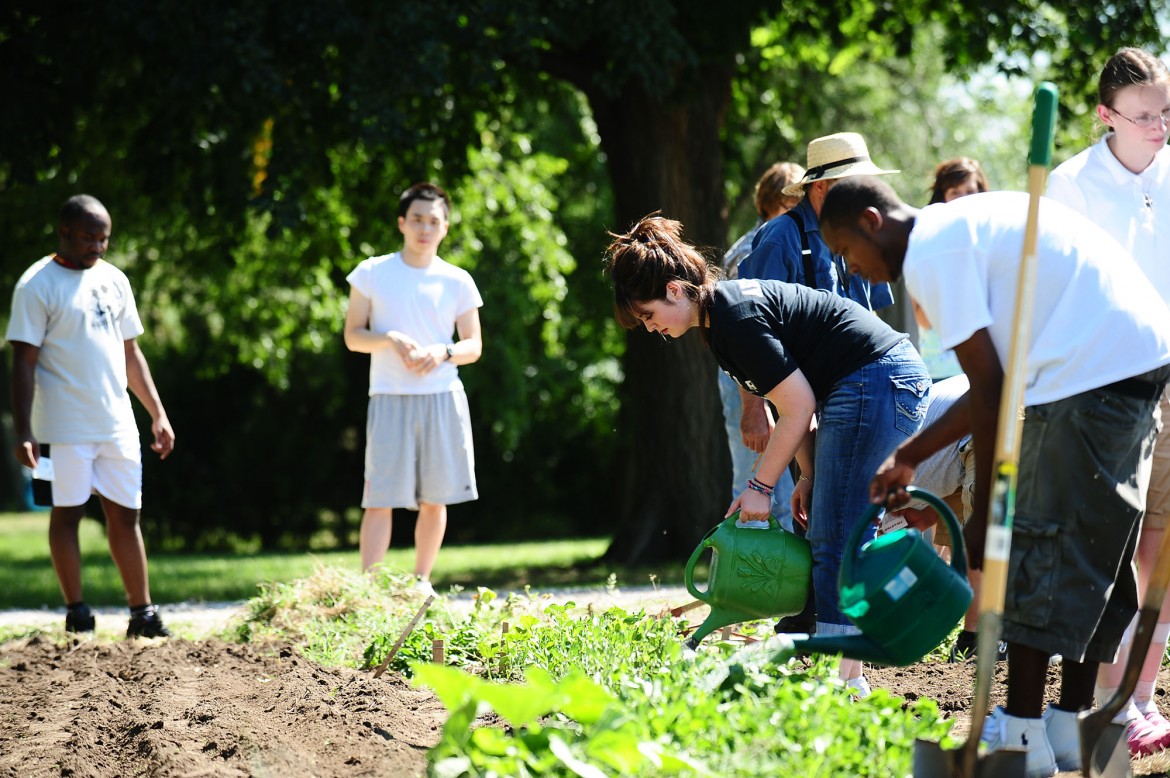 Stewardship is, by no means, a new concept to the Hesston College community. Care of resources, from buildings to funds to the environment, is among the values woven into the fabric of the college. Now, in the age of “going green,” students, faculty and staff continually explore new and innovative ways to reduce the college’s carbon footprint.

“We are an educational institution,” said Jim Mason, director of Campus Facilities. “We should be portraying a model to our students that includes making good sustainability choices and the benefits that come from that behavior.”

One of Mason’s goals when he began his role at Hesston in March 2002 was to reduce energy consumption in cost-saving ways. Upgrading lighting was a significant and quick first step. By September 2007, the results were so substantial that Kansas Sen. Carolyn McGinn (R-Sedgwick) invited Mason to present on the college’s energy saving efforts at the International Energy Council’s annual meeting in Wyoming.

Since that time, the rest of the community has embraced the sustainability efforts by participating in cost effective campus-wide projects.

Physics II professor Nelson Kilmer makes solar power an integral part of his curriculum. Class projects in recent years include the installation of solar panels on the roof of J.D. Charles Hall of Science and Math to power the lights in the physics classroom. Another class adapted a golf cart to run on solar energy, while another explored the feasibility and did a cost analysis for faculty and staff members interested in installing solar panels on their homes.

Students, faculty, staff and Villa residents work together to care for the garden, and the produce is given to local families who may not have the financial ability to purchase fresh produce.

With the start of the new First Year Experience seminar in fall 2010, faculty and staff discovered a new way to continue educating students on the importance of being good stewards of the environment.

Required for all first-year students, the class addresses prominent issues, and one of the foci was sustainability. Students and facilities staff watched the film “Trashed,” a documentary about the rapid growth of the garbage business, and together they placed signs on trash cans and recycling bins across campus urging people to think about what they were throwing away and if it could instead be recycled.

“Having a campus that practices good sustainability habits is important because what the students learn here, they take with them everywhere,” said facilities staff Randy Toews. “If students are a part of a community that makes a conscious effort to care for the earth, they may be more likely to continue the practice once they get out on their own.”

Much to Mason’s delight, the change saved the college money as well, as a trash dumpster costs $15 more to empty than a recycling dumpster of the same size.

Mallory Schroeder of Hesston, Kan., was a student in the First Year Experience seminar, and says that the class content had an impact on her.

“When we made the push for recycling, I noticed how I started throwing things in the recycling bins more frequently,” said Schroeder. “I never really thought about the things I was throwing away, but the money we can save and the environmental impact is amazing.”

During the last 10 days of the 2010-11 year, Dr. Karen Sheriff LeVan, faculty member and coordinator of the First Year Experience seminar presented a 10-Day Give challenge to students. As they packed up their dorm rooms for the summer, students were encouraged to donate any unwanted clothes, bedding and other items instead of throwing them away.

An on-campus donation site was set up, and at the end of the challenge the collected items were donated to United Methodist Youthville, a non-profit child welfare agency in Newton, Kan.

The effort’s success could be seen in the large roll off dumpsters according to Toews.

The spirit of giving fostered by the 10-Day Give project carried over to the facilities staff. After students moved out of the dorms for the summer, renovations began in Erb Hall central and west dorms, and the first step was to move out the 42-year old furniture.

Despite more than four decades of typical wear and tear, the furniture was still in good condition.

“The furniture held up well for us, it just doesn’t fit our needs anymore,” said facilities staff Tim Goering.

The facilities team explored several options for the furniture from selling it to donating it. A connection in Waco, Texas, prompted much of the furniture to be sent there, where it was donated to 20 non-profit organizations. Several local nonprofits in Newton and Wichita received some of the furniture as well.

The dorm renovation has been an ongoing project, beginning first with a new insulated roof, followed by new energy efficient windows, then a new water heating system. Mason has seen utility costs for the building drop since the upgrades were made, and he has confidence the new heating and cooling units in this last phase of renovations will save even more.

The start of the 2011-12 year will see more earth-conscious initiatives taking off, including a campus-wide common read. Each faculty and staff member was given a copy of the book “No Impact Man,” a family’s chronicles of their year-long effort to leave as little impact on the environment as possible, to read during the summer. As students return in August, employees are encouraged to give their books to the college bookstore for first-year students as part of the First Year Experience class. Throughout the year, campus-wide discussions and projects relating to sustainability will take place as the college continues to strive to decrease its carbon footprint.

“As we move forward, I hope to see a continued conscious effort on the college’s part to emphasize smart, cost effective sustainability practices that conserve natural resources and send the message that this is a chosen way to do business,” said Mason.