Graduates challenged to go forth with love and unity 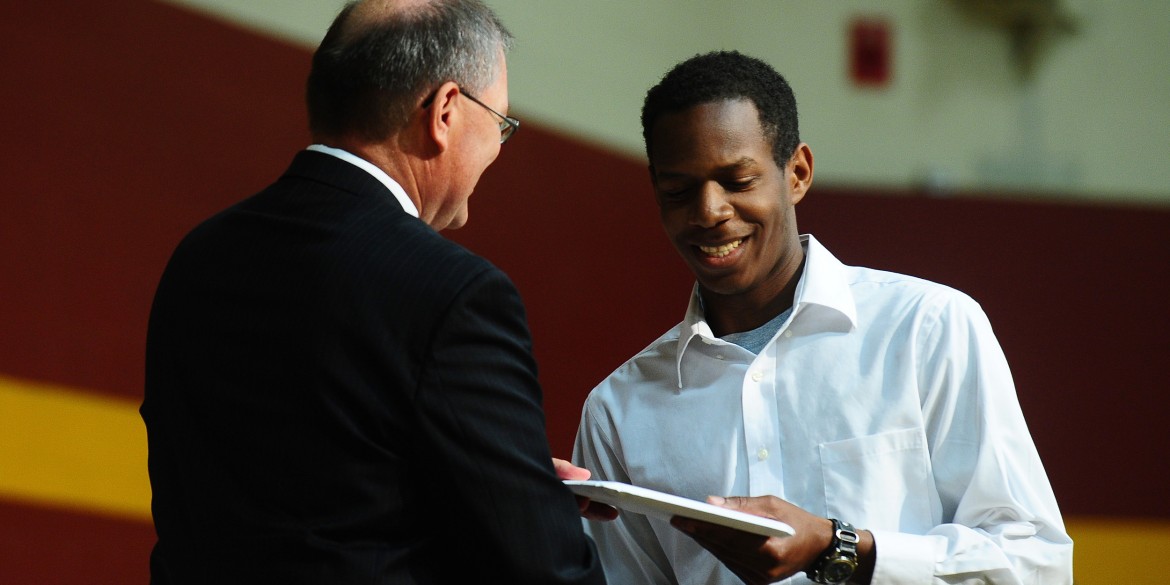 Hesston College’s 139 graduates of the class of 2011 were encouraged during a May 8 commencement ceremony to go into the world with a spirit of love and unity.

Regina Shands Stoltzfus, professor in the Peacemaking, Justice and Conflict studies and Bible, Religion and Philosophy departments at Goshen (Ind.) College, as well as adjunct professor at Associated Mennonite Biblical Seminary (Elkhart, Ind.) and mother of graduate Rachel Stoltzfus addressed the graduates with the message “Rooted in Love, Sent Out in Hope.”

Stoltzfus’ message was based on Ephesians 3:20-21, which served as the Hesston College theme verse for the 2010-11 academic year.

“Paul gives this good word, this benediction at the conclusion of a beautiful prayer as he prays for one of his churches,” said Stoltzfus. “Paul prays that they might be strengthened by God’s spirit and that Christ will dwell in their hearts.”

She encouraged the graduates to embody that same spirit as they leave Hesston College, go into the world and impact it with their talents and gifts.

Stoltzfus reflected on the struggles of the civil rights movement and her own experiences of growing up in a mixed-race church in Cleveland, Ohio, to illustrate how love can make a difference in the world.

“What impressed me was the ordinariness of it all,” she said in reflection of her early church experience. “It’s not like every day was a protest march. We were just ordinary people meeting together. We were learning to love one another not in spite of our differences but because we were a church together and love is just what you do.”

As Paul encouraged the early church with the overarching message of we are one and we are different, Stoltzfus challenged the graduates to remember their call to truth and unity, even when the two seem to be in tension.

“You leave this place as a collection of bright, gifted, educated people with diverse backgrounds, experiences and world views,” she said. “You go out into a world even more diverse and even more fractured by the moment. Hold truth and unity in your hearts as you go along your way.”

Graduates Leah Rittenhouse of Mount Pleasant, Pa., and Alex Roth of Hesston, Kan., were nominated by their classmates to give the student address during commencement.

Individual student groups were recognized in special ceremonies May 7. Longtime Mennonite Disaster Service volunteer, Paul Unruh, addressed six Disaster Management students receiving certificates of completion. The students will spend 10 weeks this summer working with various agencies at disaster sites to complete their requirements. The seven Aviation and Air Traffic Control graduates who have completed their requirements were honored during a reception. Tyson Teeter, a 1994 Hesston College graduate was the speaker.

The college’s Nursing Department presented pins to the 48 member of the 44th class of graduating nursing students. Steve Kelly, President and CEO of Newton (Kan.) Medical Center with the message “Purpose with Passion.” He encouraged the graduates to avoid mediocrity in their service.

Other weekend activities included a sophomore recital by Andy Miller of Marion, S.D., and Perry Andre of Wauseon, Ohio, a tree dedication in memory of Chloe Weaver, class of 2010, a bon voyage concert by Bel Canto Singers as a precursor to their two-week west coast tour and student-directed one act plays by freshman Libby Waltner of Hurley, S.D., and sophomore Justin Greger of Goshen, Ind.