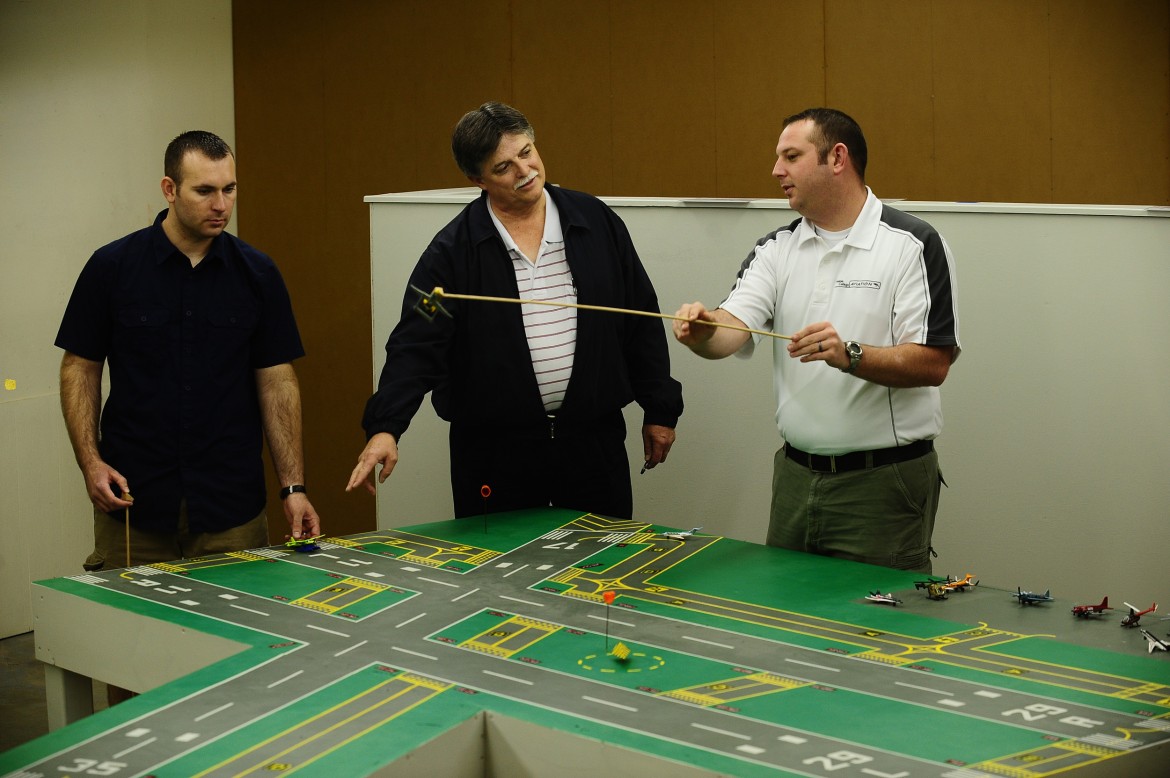 Air Traffic Control is not a career path for the faint of heart, and in the aviation field it sometimes gets overlooked for the “cool factor” of being a pilot. The first graduates of Hesston College’s Air Traffic Control program, however, are ready for the fast pace of work in a tower.

Two years after offering its first Air Traffic Control course and one year after being named to the Federal Aviation Administration’s Air Traffic Collegiate Training Initiative (AT-CTI), seven Hesston College students were recognized in a May 7 ceremony for completing the curriculum. Now they await an invitation to the next steps in becoming an air traffic controller – a spot in the FAA’s program in Oklahoma City.

“This group of students showed a high level of motivation and dedication for the demands of the program,” said Dan Miller, director of Aviation.

The Hesston program, like the other 35 FAA-approved programs across the nation, has high standards even when considering applicants for the program.

“Air traffic control takes a certain personality,” said Miller. “The job demands attention to detail, discipline, composure in a dynamic environment, a sharp memory and the wherewithal to make accurate decisions. When we look at applicants for the program, we are looking for these qualities as well as high scores on the math section of the ACT or SAT.”

Once enrolled, the program provides appropriate education, experience and training to prepare students to enter the Oklahoma City program – a program where there is no guarantee of earning a spot. Students must receive an invitation from the Oklahoma City program, and entrance into the program is based on a points system. Applicants earn points for successfully earning a degree at an AT-CTI school like Hesston, having a private pilot’s license and other flight training and the score from the Air Traffic Selection and Training exam (AT-SAT). A score of 70 percent is needed for an applicant to even continue in the selection process. As a credit to their Hesston training, all seven students scored above 70 percent.

Aside from the FAA’s requirements, the Hesston program requires students to meet certain standards as well. They must complete the associate of arts degree in good standing, earn an 80 percent or better in ATC classes and obtain their private pilot’s license.

As the students graduated, they were confident in the training they have received and excited for the future possibilities in the aviation field.

Ryan Sprunger, a graduate from Dalton, Ohio, appreciates the opportunities the program gives students to put their learning to practice.

“Having my private pilot license will benefit me as a controller,” said Sprunger. “I now have an idea of what is happening on the pilot’s end when I am giving instructions.”

Sprunger said visiting different types of towers and practicing clearances, approaches and departure instructions in the campus’ computer and table model simulation labs was valuable to the experience as well.

“It was fun to actually put together everything that we learned and practice it,” he said.

Sprunger is continuing his family’s Hesston College Aviation legacy. His father, Jedd, is a pilot who received his flight training from Hesston in 1980, and his brother, Grant, is a 2008 graduate who also got his private pilot’s license from Hesston.

“I’ve always been interested in aviation, but I didn’t necessarily want to fly,” said Sprunger. “Hesston’s program gave me an option I hadn’t really considered before.”

His classmate, Jerry Holloman, had similar feelings about flying.

“My dad once told me that there are a lot of aviation jobs that aren’t in the cockpit,” said Holloman. “That resonated with me.”

Holloman earned his private pilot license from Kansas State University-Salina in 2002. He spent four years in active duty in the Air Force in Colorado before starting the program at Hesston. Since he already had a bachelor’s degree, Holloman’s experience, along with three other non-traditional students, was expedited and he completed the training in one year.

“The faculty worked with us, and we were able to do semester-long classes in eight weeks,” he said. “We would be in those classes for two to four hours two or three times a week.”

With a wife, Shelby, and daughter, Piper, born in September, balancing the program with family wasn’t always an easy task, but Holloman succeed, passed the AT-SAT with an 87.5 percent, which the FAA considers well qualified, and will play the waiting game with his classmates.

“These students came with an attitude of success,” said Miller. “Our mission was to equip them with the background and experience they need to continue being successful.”