Best in Show from the annual student exhibit 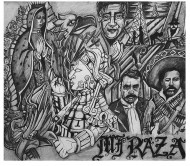 This picture is a representation of the Mexican culture using some of the key figures that are well known in the culture are a great influence in the Hispanic community. The Indian in the middle represents the fallen empires of our ancestors the Inca, the Mayan and the Aztecs. They were all once highly developed intelligent civilizations that met their demise by Spanish conquerors. The images to the left are both eagles, the one facing south has a snake in its mouth which represent Mexico and the other eagle is facing north and its holding spears which represents America. La Virgin de Guadalupe is one of Mexico’s most popular cultural and religious icons. To the right of the Indian, Emiliano Zapata and Pancho Villa are standing strong next to each other. Emiliano was the revolutionary leader of the south who fought for the peasants’ lands. Pancho Villa was the revolutionary leader of the north who fought for the poor and for the people’s rights. Above these figures are oil fields with people working in the fields. Most of my friends and family work in these places. Finally, Cesar Chavez was a Mexican American civil rights and labor activist who worked in these fields and felt the suffering of immigrant workers. He was an ordinary person who fought for better work conditions in these fields and he did it in a nonviolent way.