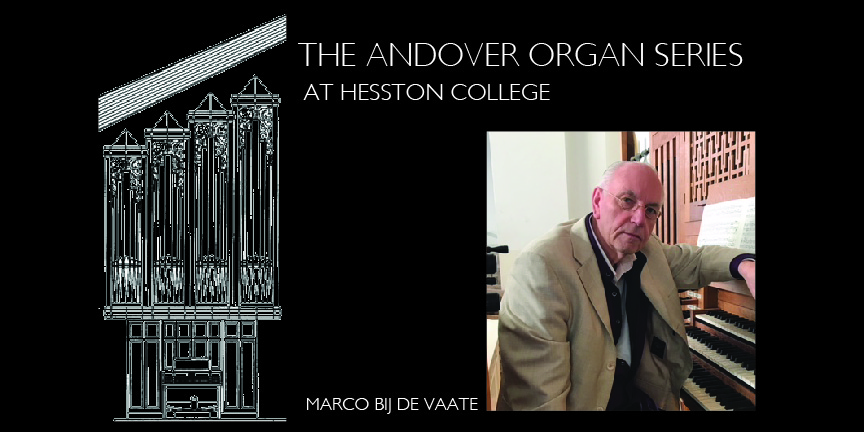 The third season of the Andover Organ Series at Hesston College will launch with an recital by Dutch organist Marco bij de Vaate at 4 p.m., Sunday, Feb. 24, at Hesston Mennonite Church. The concert, funded by the John Ernest Foundation, is free and open to the public.

Bij de Vaate is the organist at the Doopsgezinde Kerk (Mennonite Church) of Haarlem, the Netherlands. He is a graduate of the Amsterdam Conservatory, and a past winner of the Prix d’Excellence – a top prize of excellence for organ performance. Among bij de Vaate’s teachers were two important Dutch organists, Klaas Bolt and Piet Kee.

In addition to his work as a church musician, bij de Vaate gives private lessons and is active as a concert performer, including concerts throughout Europe. A specialist in the music of Johann Sebastian Bach, he is featured in the 2010 CD, “Back in the Doopsgezinde Kerk, Haarlem.”

The Andover Organ Series at Hesston College is funded by the John Ernest Foundation and features organists from around the world. Andover organs are built by the Andover Organ Company of Methuen, Mass. The company builds and restores mechanical action pipe organs, and since its founding in 1948, has restored more than 500 organs across the U.S., as well as building new instruments, including the Opus 116 pipe organ installed at Hesston Mennonite Church on the Hesston College campus in 2007.