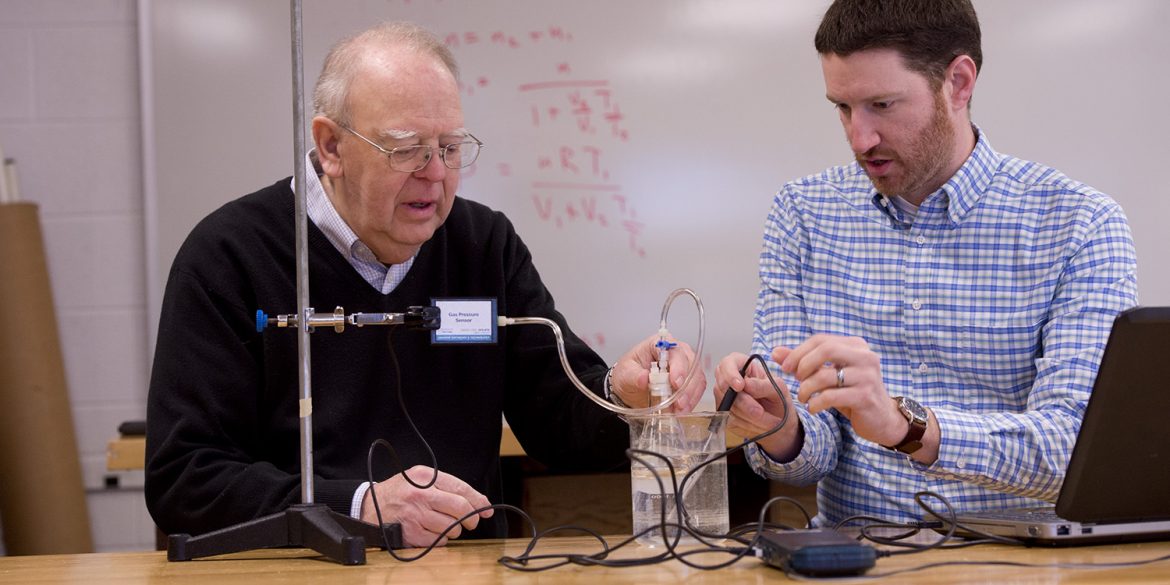 Hesston College physics professor Joel Krehbiel and physics professor emeritus, Nelson Kilmer, aren’t satisfied to just look past answers that don’t quite hit the mark. With a shared curiosity for accuracy, and a relationship built on respect of the work each does and has done with students, the educators collaborated on two articles, with student collaboration on one, that were published in the January 2019 issue of The Physics Teacher journal.

It started during Krehbiel’s first year of teaching in fall 2015.

“Nelson was really helpful during my first year of teaching and willing to assist, so he often attended labs to help out,” said Krehbiel.

Kilmer had helped students conduct the same experiment countless times before retiring in 2014 after 46 years at Hesston College. He noticed that the estimates for absolute zero were off by almost 15 percent and he was curious to what might be going on.

“Nelson pointed to the fact that we were using different sized flasks than he had used when he conducted the experiment, so he decided to look into it further,” said Krehbiel. “When he observed the setup, Nelson suggested that we might be ignoring part of the tubing connected to the flask in the measurements. The flask was placed in the different water baths, but the tubing was not in the water and basically remained at room temperature during the whole experiment.”

“I see the purpose of doing an experiment not only to gather data and summarize the results, but also for students to develop critical thinking skills,” said Kilmer. “The error in this experiment was 10 times larger than the expected error based on the equipment used. It was disappointing to students that their results did not come out as they theory predicted.”

After about a month of work, Kilmer presented a theory describe the pressure, volume and temperature relationship in a system of two connected volumes. Using Kilmer’s theory, the two men worked out a new equation which was used to modify the extrapolation to find absolute zero. The following fall semester of 2016, students tested the new equation during the lab, resulting in errors of less than 2.5 percent and leading to the article entitled “Improved Guy-Lussac Experiment Considering Added Volumes.”

“Thinking through and analyzing errors in an experiment can often provide a learning opportunity to gain deeper understanding of the experiment,” said Kilmer. “Joel and I were curious as to the source of these large errors and if there was a problem with the underlying assumptions and theory used to explain the experiment.”

As freshmen, Schroeder and Suzuki developed the procedure for the experiment, took the data, completed the analysis, and helped to write the article, “Using a modified Boyle’s law experiment to estimate the density of salts.”

The article offers a new way to find the density of complex crystalized material which also dissolves in water, such as salt, using simple lab equipment.

“A common method for determining the volume of objects is to measure fluid displacement, but unfortunately salt crystals dissolve in water, so that method cannot be used for salts,” explained Krehbiel. “In contrast, our method provides a straightforward way to find the density of salt crystals using typical laboratory equipment.”

Learning experiences that go beyond lectures and note taking and dive into practical application and experimentation are critical to the foundational, experiential learning environment Hesston College strives to give students early in their collegiate career and across all academic disciplines.

“I learned a lot from working on this article,” said Schroeder. “As the first piece of physics literature I have contributed to, it really taught me a lot of about the process of producing not only valid results for experimentation, but also how to show those results in a literary format to make the communication of the sciences simpler. Many people take the writing to be a given, however, it’s a skill that is not always delved into but is necessary for those starting in the field.”

“I plan to major in aerospace engineering, and research and testing will be required,” said Suzuki. “I want to pursue my academic and career with curiosity. This experience taught me the important elements to build a successful experiment, which will be helpful as I continue learning.”