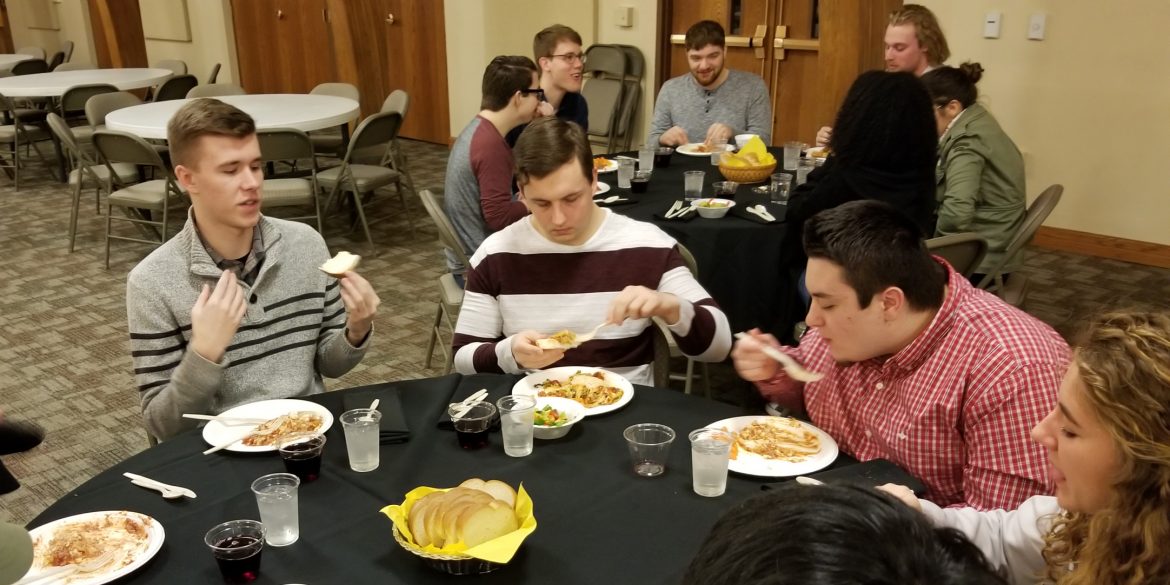 Over dinner Sunday evening, Hesston College history, economics and psychology students had conversation around the value of college and education in the format of a historical “Jefferson Dinner.”

Built on the premise of sparking civil conversation, the event at Hesston College and historically brought together voices from a variety of backgrounds and schools of thought to listen and share with one another.

“Studies show that increasingly, we’re not listening to each as much – especially politically,” said history professor Peter Lehman. “Jefferson Dinners, then and now, are opportunities to talk about issues of public importance.”

Lehman shared that the first Jefferson Dinner was held in 1790 when Thomas Jefferson, then secretary of state, gathered representatives of different sides of a disagreement on how the new country would pay for the Revolutionary War. To that point, the disagreement had resulted in a deadlock in Congress, and Jefferson hoped civil dialogue would bring about a compromise. And it did – The Compromise of 1790, also known as The Dinner Table Bargain.

Today, Jefferson Dinners are being encouraged by the Village Square, a non-profit, non-partisan, educational organization based in Florida. Likewise, rotary clubs around the country are sponsoring dinners to facilitate dialogue.

An important part of the format is being set around round tables so no one is at the head and there is no hierarchy.

At Hesston College, the buzz of conversation and laughter permeated the air as students engaged with one another in a new way.

“Our tendency is to group with people who are like-minded rather than build common ground with people who disagree,” said Lehman. “These are issues which affect off of us, so we should all be in on the conversation.”