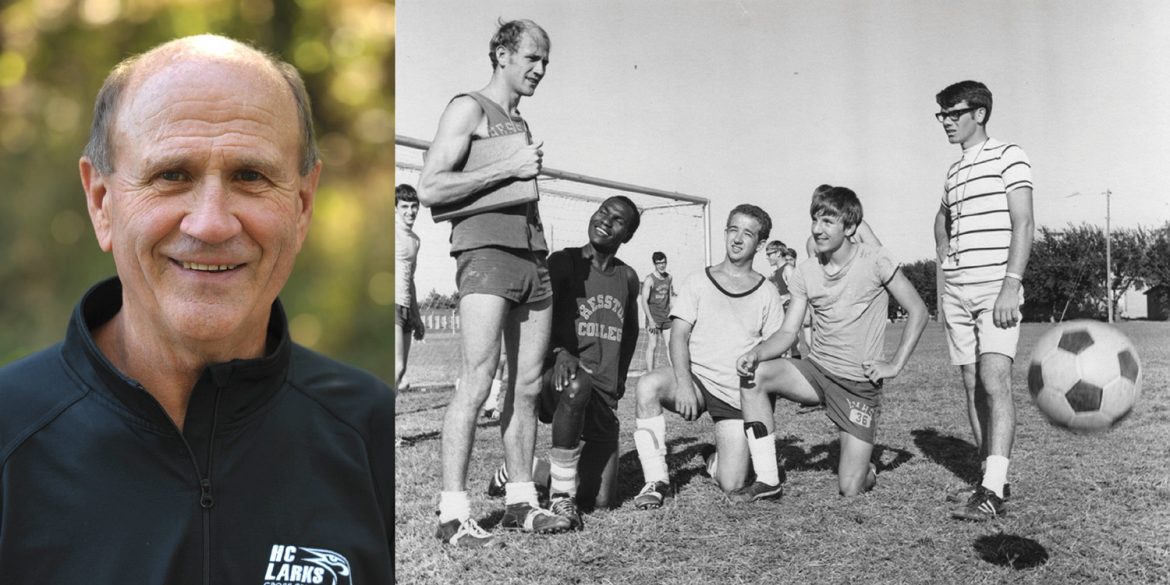 The Hesston College soccer field underwent some upgrades during the summer with leveling and resurfacing and a new scoreboard installed earlier this week, and its transformation will soon be complete when it gains the name Sieber Field.

The pending name honors coach Gerry Sieber, who coached Lark student-athletes in a several sports for 30 years – 23 years of which were as men’s soccer coach. Sieber retired in December 2017.

The naming ceremony will take place on the soccer field about 5:45 p.m., Saturday, Sept. 29, between the women’s and men’s soccer games. A time to visit with and recognize Coach Sieber will be held immediately following the naming ceremony, during the men’s soccer game at the newly bestowed Sieber Field. The ceremony is also part of the college’s Homecoming Weekend activities, which will celebrate 60 years of intercollegiate Lark athletics.

“We are grateful to Gerry for his many years of dedication to Hesston College and our student-athletes,” said President Joseph A. Manickam in an email to faculty and staff. “His commitment to the school, our students and the Hesston Experience deserves recognition in this lasting way.”

Sieber, who is a 1964 Hesston College graduate, returned to his alma mater as a coach in 1968. Over the next 23 years he coached basketball, track and field and, primarily, soccer, where he tallied 247 wins, ten region titles, led 22 players who earned National Junior College Athletic Association (NJCAA) All-American honors, and earned Coach of the Year eight times. During those years, Sieber also taught wellness classes and served as athletic director.

In 2010, after almost 20 years away from Hesston College, Sieber returned to develop a men’s and women’s cross country team, which he also coached for seven years prior to retirement. In 2015, Sieber was inducted into the NJCAA Soccer Hall of Fame for his successes leading the Lark program.

Aside from the many performance-related accolades his teams earned, Sieber was also known for taking genuine interest in his student-athletes apart from their athletic development and focusing on the development of the whole person. When he moved on from Hesston College nine months ago, his efforts to build genuine community and camaraderie were recognized and celebrated as much as his successful teams.