Air traffic control with a side of ham radio: A recipe for success 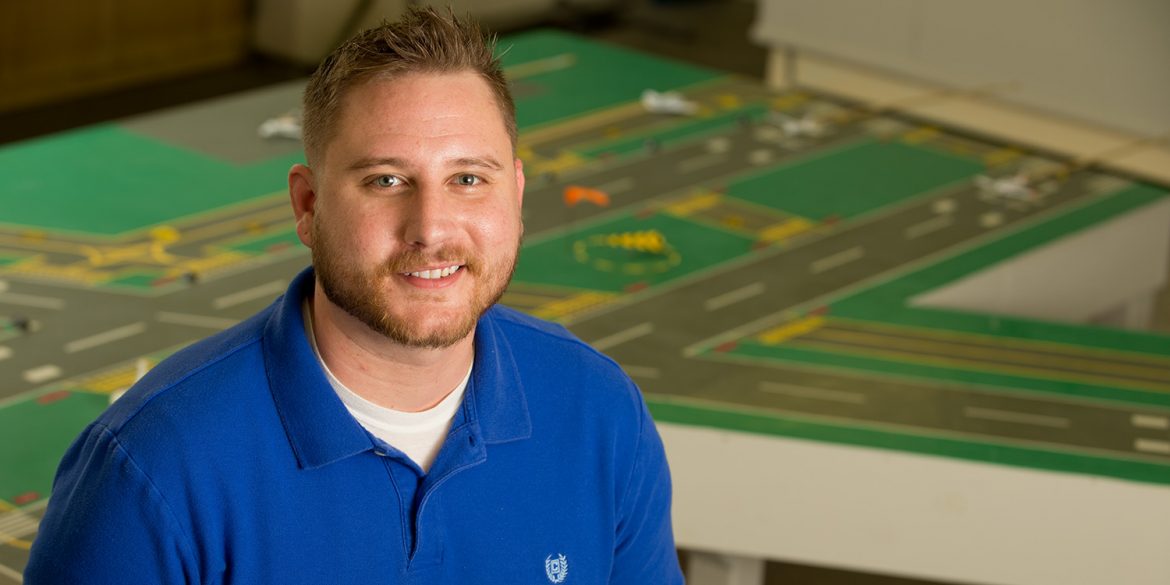 Someday in the not too distant future, Alex Hunter ’18 plans to be sitting in a radar control room, directing airplane traffic between its starting point and ending destination.

Before Hunter had even earned his Hesston College degree in Aviation – Air Traffic Control (ATC) on May 13, he’d already moved part way through the process for the next step in an air traffic controller’s career path – the Federal Aviation Administration’s (FAA) Academy in Oklahoma City. He just needs the paperwork to be approved and a spot to open and he’ll be en route to Oklahoma for more ATC training.

“I applied to the FAA for the Oklahoma City Academy in July 2017, so it’s a long process to get through, but I’m excited I’m this far in the process now and for the day I get my call to go,” Hunter said.

As one of only 36 FAA-approved Collegiate Training Initiative (CTI) Air Traffic Control programs in the country – only about 30 of which are currently active – and the only one in the state of Kansas, Hesston’s program fits a very specific niche for an industry currently in high demand.

Prior to the FAA’s launch of the CTI program, the Academy would train any U.S. citizen applicant, even those with no controller or aviation knowledge. As might be expected in a highly specialized line of work, the pass rate was low. With the introduction of the CTI program, Academy acceptance changed and only individuals who had graduated from a CTI school or those with military experience were accepted. A few years later, Congress changed the rule and decided to let anyone off the street again apply, with no preference given to CTI graduates. Again the Academy pass rate plummeted. So not even a year ago, the FAA reinstated the program while still maintaining open enrollment but bringing applicants through two different pools – one for CTI graduates and military veterans, and the other for any other U.S. citizen.

“Despite all the changes with this program, Hesston has hung on,” said professor Bob Harder. “Even when the FAA stopped giving preference to CTI graduates, we still had several students go through our program who eventually went on to become controllers.”

The FAA doesn’t want CTI schools to train students as controllers, as they are trained in a very specific way once in the Academy, but rather prepare them to be successful at the Academy.

Preparing students for success is one of the things Hesston College does best, and it may be the unique experiences Hesston’s program gives students that help make the difference as they compete for the coveted Academy spot.

For starters, Hesston ATC students are also required to get their Private Pilot certificate – a requirement that is only in place at a few other CTI approved schools.

“Controllers don’t often have flight experience and don’t know what it’s like to be on the other side,” said Harder. “If they understood situations from a pilot’s perspective, they may be able to assist in ways non-pilot controllers can’t. We think having these students learn to fly is a valuable experience that goes above and beyond.”

The other unique point is an option rather than a requirement, but one that several aviation students take part in every year – amateur radio, or Ham Radio Club.

Harder, who is a licensed ham radio operator with an avid interest in contesting, started the club in the mid-2000’s, and has been wildly successful – even in the age of cell phones and ever growing technological advances.

Each November, the club competes in the School category of the American Radio Relay League November Sweepstakes, the most popular ham radio competition in the country. The club has beat out competition like Stanford, MIT and Harvard over the years, and is currently on a five-year winning streak.

“Ham radio uses the same phonetic alphabet as aviation – A is Alpha, B is Bravo, C is Charlie,” said Harder. “It’s great practice because we use the phonetic alphabet to give call signs. It can also be very fast. It’s like being in a control tower when the planes are all coming in at once. We also have to accurately log each contact on a computer.”

In the November Sweepstakes competition, participants make and record as many contacts as possible in a 24-hour period.

“I really like using air traffic and aviation students, especially air traffic because they need to talk for a living,” said Harder. “Aviation students are often scared to talk on the radio when they first get started. They are just microphone shy. They want to sound good right away, so ham radio helps them build their confidence.”

For Hunter, the dedication of the faculty to see students succeed is key in his Hesston College training and preparation for the Academy. Because he hadn’t yet completed the CTI program, he entered as a military veteran, having spent five years as a Navy medic.

“I’ve really appreciated the faculty and staff who do such a good job taking care of students’ needs, being flexible with scheduling and building personal connections,” said Hunter. “The kind of training Hesston offers is exactly what the Academy wants, and I’m grateful for that.”