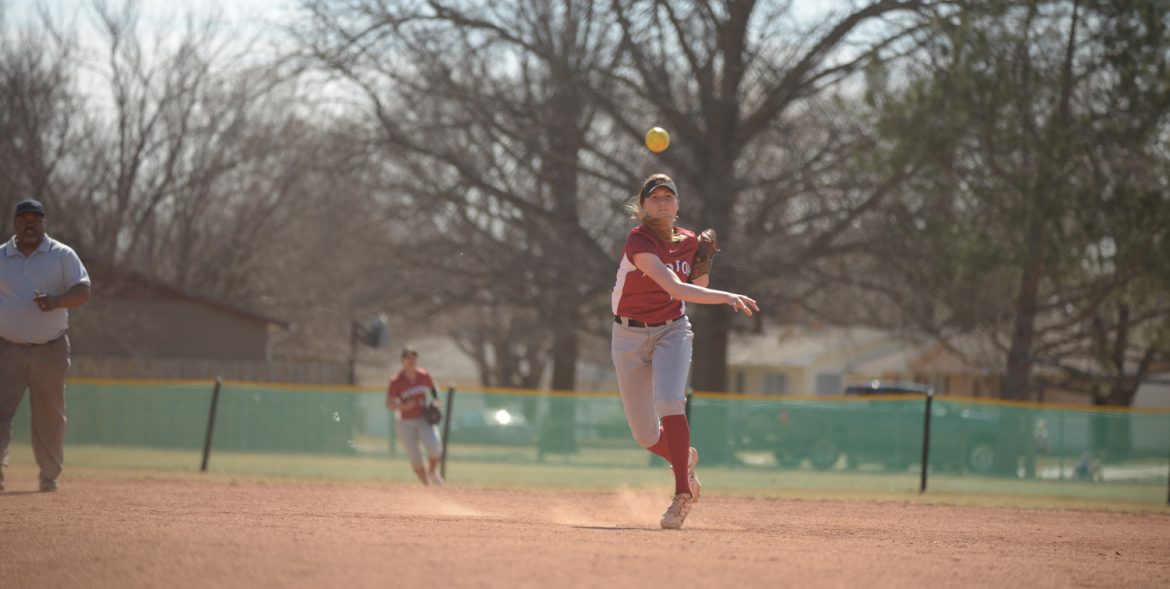 Coming from southern California (Highland), Sierrah Long thought twice about attending college in the middle of Kansas. Turns out Hesston College had a lot more to offer her than she originally thought.

“The schools said I can’t be an athlete and a nursing major at the same time,” Long said. “They thought it was too much work, and at bigger schools, athletics would come first. If I had a clinical or a class that overlapped into practice, I’d miss the class. They wouldn’t accommodate for my academics while I was playing on their team.”

Luckily, head softball coach Andrew Sharp ’99 offered her the chance to do both. And soon after that, head volleyball coach Deedee (Martin) ’02 Landes wanted Long on her team as well. Landes saw her potential even after Long had been passed over by Hesston’s previous coach.

“One day in July before coming to Hesston, Deedee called me and said she saw my recruiting video in a pile of turned away athletes,” she said.  “Deedee said, ‘I don’t know why you were turned away! I want you to play for my team.’”

After consulting her parents and Sharp, Long said yes and joined the volleyball team at the beginning of her freshman year.

“I was doing both sports during the fall semester of my freshman year,” she said. “Coach Sharp would schedule softball after volleyball practice so I would always be at practice. Before volleyball games, I would have batting practice.”

This year, she figured out a way to do only volleyball in the fall and only softball in the spring, making her schedule a little more bearable, she said.

“In high school, I played volleyball and softball all four years,” she said. “Those coaches were able to work with me, and we split our season in half. I was a fall athlete and a spring athlete. Even now, I only have one sport to play at a time.”

After two years of playing for two teams, Long has found value in her Hesston experience. Her greatest achievement comes from being a dependable teammate to other players.

“For the volleyball team, I don’t have a scholarship, but it didn’t take away from the love that I have for the game,” she said. “I felt like they looked up to me as a leader and asked me questions about things that they needed help with. I feel like that’s an achievement in itself, to be that person that people look up to.”

Her teams give plenty back to Long and help her outside of athletics. As a faith-oriented group, her volleyball team helped with classes such as Biblical literature, a subject Long had never encountered before. And with many nursing majors on the softball team, she has a go-to group to help in that subject area.

“The volleyball team is like a built-in family,” Long said. “They were the ones who pushed me into the Hesston Experience and had me try new things and showed me the ropes. The softball team is where a majority of my core friends are. They became my second built-in family.”

While her teammates greatly influenced her time at Hesston, her coaches also became a big part of her college experience.

“Deedee is my mom at Hesston,” she said. “If I have anything to deal with, I know I can go knock on her door. Coach Sharp is the guy I go to talk to if I’m struggling on the field or if something needs to be changed.”

Both of her coaches are impressed by the person and athlete Long has become.

“The word that keeps coming to mind is ‘presence,’” Sharp said. “Her position on the field is right in the middle of the action, and that is appropriate given her play-making ability and respect she has from those playing around her.”

Landes also sees her consistency and leadership qualities on the court.

“I have learned that sometimes the best leaders aren’t those that verbally state their expectation but that lead through example and positive spirit,” Landes said. “She also has shown me how to balance the things in life that matter. She isn’t caught up in her athletic ability. She is grounded.”

by Sarah Miller ’18, first published in the Hesston Horizon.