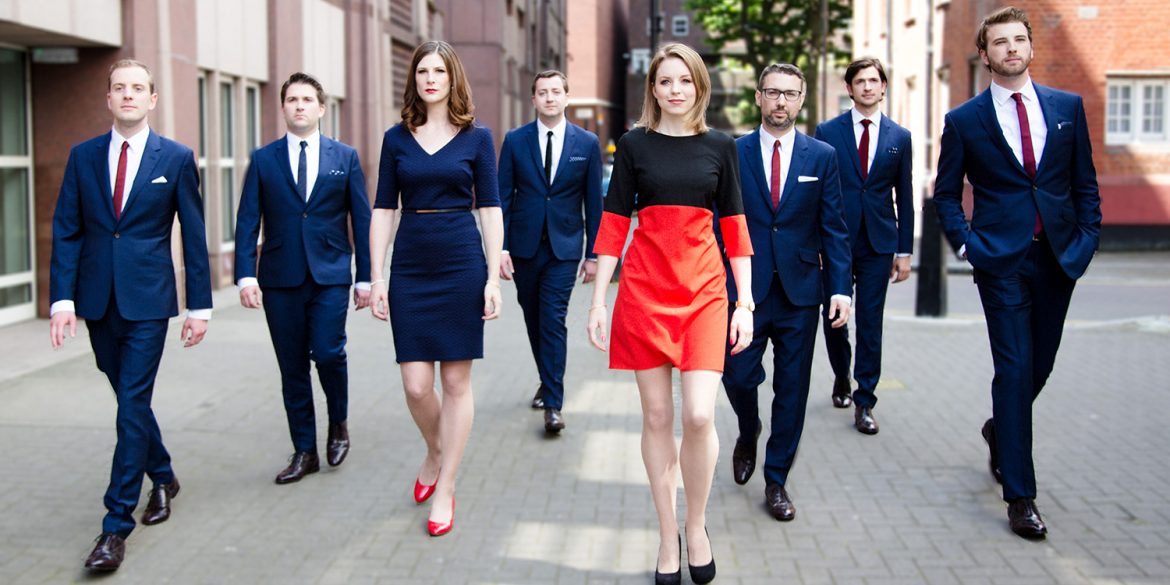 Having established themselves as one of the world’s best-loved singing groups, the British vocal ensemble VOCES8 will delight a Hesston-Bethel Performing Arts (HBPA) audience as part of their North American Tour at 7:30 p.m., Friday, Feb. 9, at Hesston Mennonite Church on the Hesston College campus.

The a cappella ensemble comprised of eight mixed voices was praised by “Gramophone” for its unity. “The singing of VOCES8 is impeccable in its quality and balance. They bring new dimension to the word ‘ensemble’ with meticulous timing and tuning.”

VOCES8 performs repertoire from Renaissance polyphony to contemporary commissions and arrangements. The group is a Decca Classics artist and has released acclaimed recordings that have topped the classical charts. With an on-going program of recordings and live broadcasts, VOCES8 is heard regularly on international television and radio.

VOCES8 performs extensively throughout Europe, North America and Asia. The 2017-18 season includes debut tours in Singapore and Mexico as well as an extensive European schedule and about a month of U.S. performances.

In addition to outstanding musicianship, VOCES8 is passionate about music education and is the flagship ensemble of the choral music charity VCM Foundation, which works with young people to develop an appreciation of choral music, provides teacher training and holds regular training events singing celebrations.

Thanks to a grant from the National Endowment for the Arts, as part of its HBPA visit, VOCES8 will conduct two days of choral master classes for area high schools and colleges.

Reserved seating and general admission tickets for the VOCES8 performance are available online or by calling 620-327-8105. Single tickets are for sale at the Hesston College Bookstore in Erb Hall or Bethel College’s Thresher Shop in Schultz Student Center during regular business hours. Reserved seating is $27 for adults and senior citizens, and general admission seating ranges from $18 to $23. Discounts are available for students and senior citizens.

The Hesston-Bethel Performing Arts series is a collaborative effort of Hesston College and Bethel College, presenting five performances by world-renowned or regionally acclaimed artists each year. HBPA is funded in part by the cities of Hesston and North Newton, Excel Industries and Hustler Turf Equipment, KMUW, the National Endowment for the Arts and area patrons.