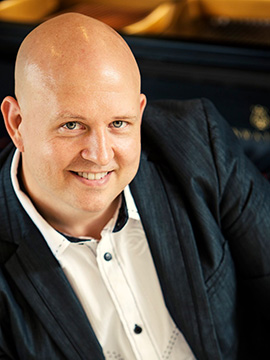 At the very forefront of American pianists, critics and audiences have unanimously hailed the distinctive and compelling performances of pianist Steven Spooner. Passionately devoted to the solo recital as a platform for innovation, he has been engaged and often re-engaged at prestigious venues such as the Salle Cortot in Paris, the Shanghai Concert Hall, Budapest’s Great Hall of the Liszt Academy, and New York’s Carnegie Hall. His latest recording project with David Dubal explores the many facets of the Liszt repertoire.

Steven is increasingly in demand for his masterclasses at major music institutions all over the world such as the Paris Conservatory, Milan Conservatory, Liszt Academy of Music, and the Shanghai and Beijing Conservatories and in America at Rice, Indiana, Colburn, Oberlin, and many others. Steven serves on the piano faculty at the University of Kansas and is the winner of the 2014 Scholarly Achievement Award given to faculty members who enhance the university’s international reputation.

A dedicated and caring teacher of students from around the world, Steven’s pupils have been named winners of multiple prizes at important international and national piano competitions and enjoy performing careers of their own. Steven’s students have been accepted at the nation’s top universities and conservatories including Juilliard, Eastman, Peabody, Manhattan School of Music, Cleveland Institute of Music, Oberlin Conservatory, San Francisco Conservatory, University of Southern California, University of Michigan, Indiana University and attended important institutions abroad such as Fulbright winners to the Liszt Academy in Budapest, the Sibelius Academy in Helsinki and the St, Petersburg Conservatory in Russia.

Steven Spooner is a Steinway Artist.