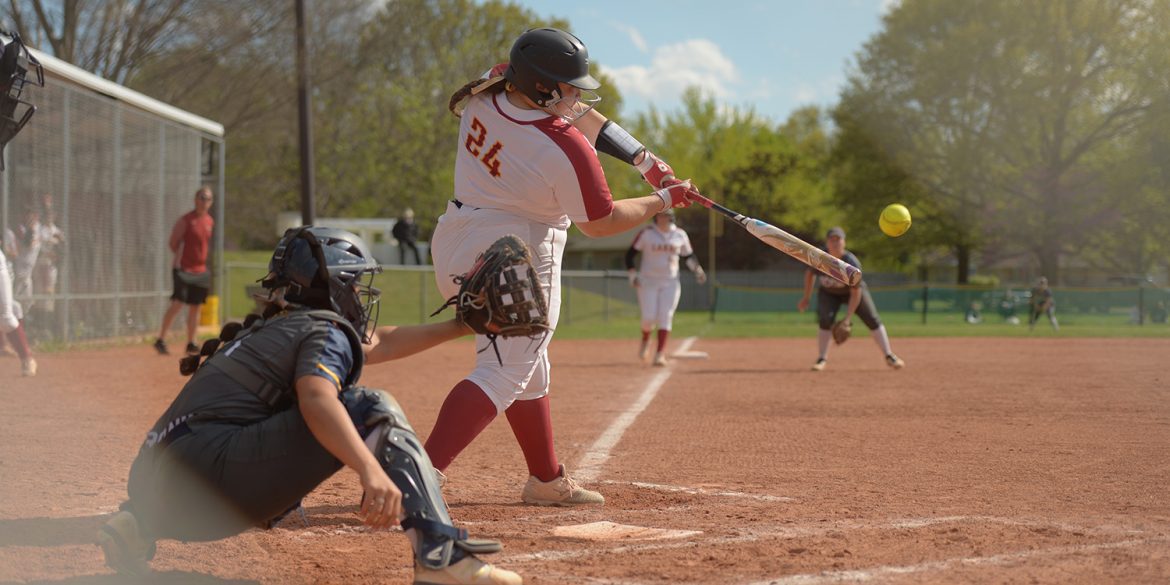 It was all on the line last night for Hesston College softball. The Larks were hosting their last Kansas Jayhawk Community College Conference (KJCCC) game of the season, facing first place Johnson County Community College Cavaliers. The Larks entered the game on a 21-game win streak and with two wins, would lay claim to, at worst, a share of the conference title. In typical fashion for this group of women, they got the job done winning 4-1 in game one and 4-3 in extra innings in game two. In their first year in the KJCCC, the Larks have been crowned conference champions!

Game one had both teams’ aces on the mound. Chelsea Smith, second in the country in strike outs (221), threw for the Larks. Tested a bit more than she had been by a very good Johnson County team, she gave up four hits and two walks in her complete game, adding nine strikeouts in her 18th win of the season.

The big moment came in the 4th inning for the Larks. With one out Kaylen Lassley singled through the gap into left field. Lexi Avalos doubled to left in the next at bat giving the Larks runners on 2nd and 3rd. Then, to the joy of the many Hesston fans in attendance, Amy Bretado did what she has done all year – hit a home run. The Larks took a 3-0 lead and didn’t look back. They added a fourth in the 6th as Lassley scored from third on an error. Smith gave up a 7th inning solo shot to Johnson County, but the Larks held on to claim game one.

Game two was a nail-biter. It was back and forth the entire way. In the 3rd, Johnson County got on board with two runs. A couple of Cavalier errors in the bottom of the 3rd allowed Jenna Garcia to score on a Lassley ground ball single up the center. With two outs in the 6th, the Larks got one back on a solo home run by Adrianna Ruiz.

Then, as the sun went down, things got exciting. The 7th inning saw lots of drama. The Cavaliers scored a run on a squeeze play in the top of the inning to take the 3-2 lead and padded that lead with a two shot home run off the bat of a pinch hitter. But the lineup change had not been properly executed. When the dust settled, the batter was out and the base runner returned to second base. The Larks recorded the final out of the top half at first base and needed a run to keep the game going.

Jenna Garcia reached second base on a misplayed pop up to open the inning. Next up, Jessie Miranda struck out and Garcia was later thrown out stealing third. With two outs, Lassley was hit by a pitch and Avalos lined a single into center field to put the tying run in scoring position. Up stepped Bretado who singled to left, scoring Lassley. Bretado was thrown out attempting to advance to second base.

In the top of the 8th the Larks bent but didn’t break. A walk, single and an error loaded the bases with one out for the Cavaliers. Smith, who came in in relief in the 7th, showed why she’s one of the best pitchers in the country. Smith struck out two to finish the inning.

The Larks needed just one run to secure victory. An error, sacrifice bunt, a walk and a single loaded the bases for the Larks. Jessie Miranda came to the plate with two outs and hit the walk off single on a 2-0 count, Larks win 4-3.

“I am happy for our players and proud of each one of them,” said Head Coach Andrew Sharp. “They have experienced quite a bit of growth this academic year and it is gratifying to see them play for each other. We are all humbled and excited for our next step.”