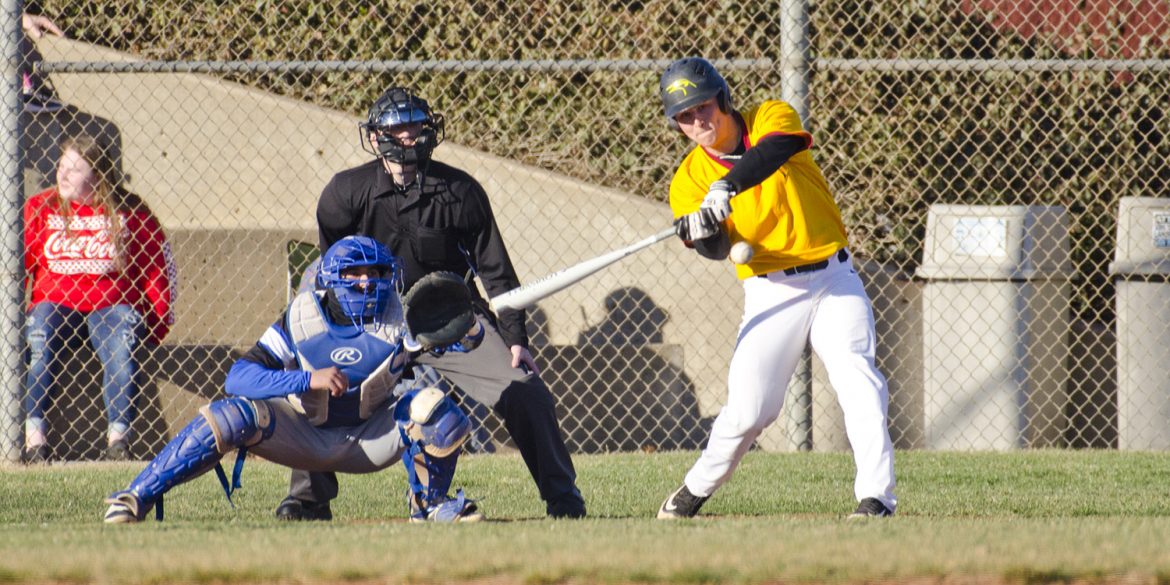 Hesston College baseball won three of four at home vs Southwestern Community College (Creston, Iowa) in two days of double headers March 24 and 25. The Larks took game one on Sunday, 12-11, dropped game two 14-10, then won both games Monday, 6-5 and 10-6.

The first day of games was filled with fireworks. Game one saw the Hesston down 11-8 in the bottom of the 7th/final inning. And then the magic happened. Caleb Stull stepped up to the plate with three on and hit a walk-off grand slam! Stull finished the game with six RBIs. Robert Salcedo had a good day at the plate going 3 for 4 and Quinn Goettel earned the win. “It all started with Calebs walk off grand slam” said Head Coach Tim Cole, “we had a great weekend”.

Game two on Sunday saw the Larks lead through the 6th inning. The Spartans of Southwestern scored five runs in the top of the 7th to take the lead. The Larks could not get the rally going like game one and the game ended 14-10. Top performers were Nathanial Solomon going 3-4 with two doubles and Hugo Kinebuchi who also hit two doubles.

Monday saw two more highly competitive games. Game one found the Larks down 2-0 as they entered the bottom of the 2nd inning. They were able to put some hits together against the Spartan pitching scoring three runs to take their first lead of the game. The game continued to go back and forth as Southwestern scored two in the top of the 3rd but Hesston scored twice to retake a one-run advantage into the 4th. Adding another in the 6th the Larks needed the two-run cushion in the 7th. A solo homer by the Spartans gave the Larks a scare but in the end, the Larks had enough pitching and defense to earn the victory. Hudson Smith led the Larks from the mound with a complete game and six strikeouts. “Hudson was incredible” said Cole, “pitching a complete game and getting his first collegiate win”. Omar Aguilar spearheaded the offense going 2 for 4 with four RBIs.

Game two on Monday started more slowly on the offensive side until the bottom of the 5th when the Larks scored three to take a 4-2 lead. The floodgates opened in the sixth and the bats really got hot for HC. Six runs came across the plate and sealed the deal, even though the Spartans scored 4 in the top of the 7th, the 10-6 win and 3-1 series triumph was complete. Nariki Fujimura went 2-4 with an RBI and Grant Bloyer and Noah Roberts each had a home run. Dave Ryan struck out 12 on the way to a complete game win “The team gave some amazing run support and we got a complete game from Dave” said Cole. “We scored 38 runs in four games. I am proud of our guys as they are really learning their role as teammates. These are incredible young men who are dedicated to each other.”

The Larks will be back in action on Thursday, March 28 as they take on McPherson College JV in a single 9 inning game. They will then host Northern Oklahoma College – Tonkawa for a double header on Friday March 29 with first pitch at 4 p.m.