Lark men win a close one against Nation Wide Academy 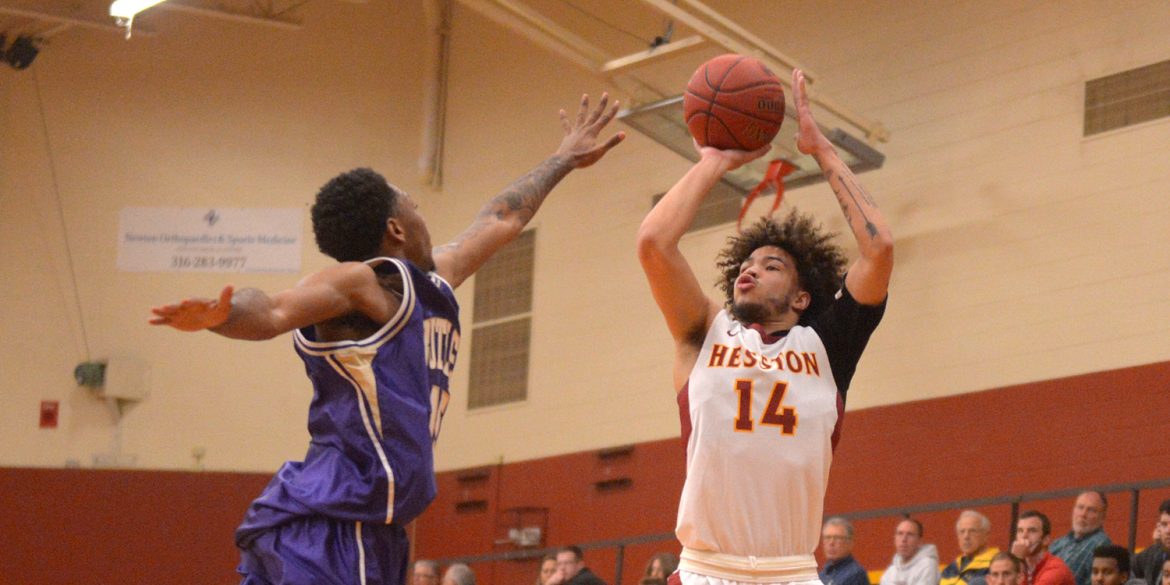 In what was dubbed as ‘very entertaining game’ of basketball on the Lark Network, Hesston College defeated the Bengals of Nation Wide Academy Prep 90-83. It was an intense game that saw both teams make huge runs and take double digit leads.

Nation Wide were hot out of the gate, pushing the tempo and finding the bottom of the net. The Bengals led 37-20 at the 8:23 mark in the first half. The reversal of fortune started at the line. The Larks were able to draw plenty of fouls, but started converting free throws with freshman Reese Nobel going 2-for-2. A defensive rebound and another basket, followed by a Nebel steal-assist on the break brought the Larks within 11 in just 56 seconds. And the comeback was on. The Larks continued to claw and brought the deficit to just four at halftime.

“We had a very sluggish start,” said Head Coach Dustin Galyon, “but we really stayed committed on the defensive end which ultimately gave us a chance to win.”

The second half saw quality from everyone on the court.

“We had 11 guys contribute and that was awesome to see,” said Galyon.

Defensively the Larks held the Bengals to just 32 shots in the half and edged them 17-16 on the boards. This team effort saw the Larks open up a 16 point lead just under the halfway mark in the second. A run by the Bengals brought the game draw within 2 with just over 2 minutes to go, 83-81. The Larks were able to hold off the Bengals, converting on the offensive end while only giving up two more points in the final 2:18.

“Nation Wide is a very talented group with a couple of D1 players, so it was a good win for us,” said Galyon. “We continue to trend upwards and have more and more guys buying in. I am so proud of the guys’ focus and energy during a really tough finals week”.

Cal Hartley had a big night with 27 points and seven rebounds to lead the Larks. Also in double digits on the night were Danny Bradley Jr. (18), Braden Handcock (12) and Sterling Hicks (10).

Next up for the Larks: Christmas break. The season resumes with two home games in mid January: vs. Next Level Prep on the 16th and Bethel College JV on the 18th. Both games start at 8 p.m.