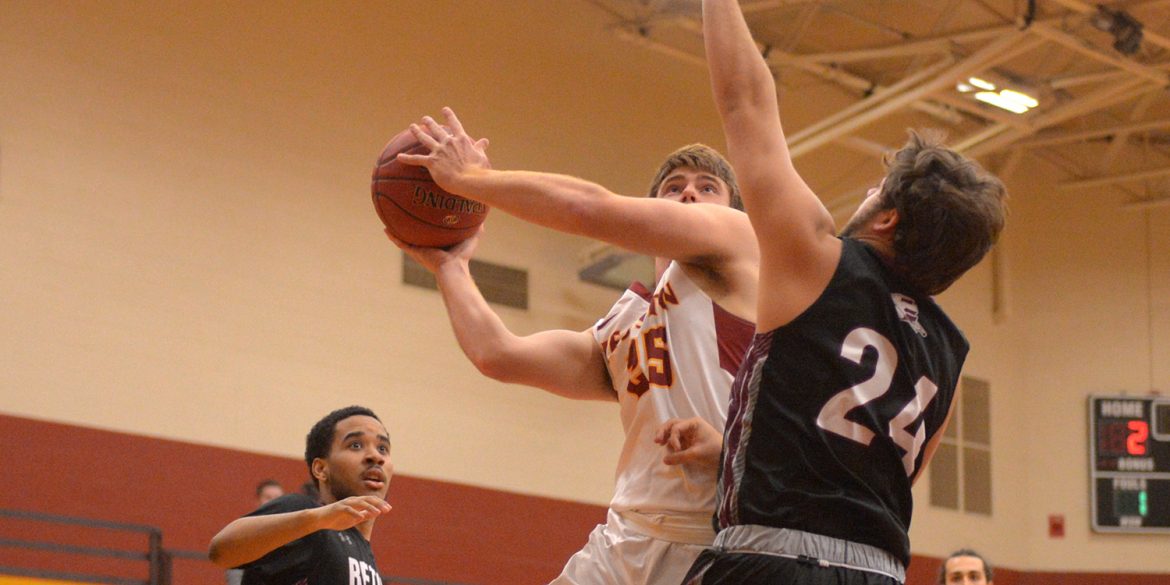 Hesston College men’s basketball team put their 2-0 record on the line against a Next Level Preparatory Academy team laced with D1 commits Monday evening. It was a back and forth affair, with nine lead changes and the game tied six times. In the end it was the Larks prevailed, 86-80.

The first half saw Next Level control the scoreboard. Any time the Larks tried to make a run and even things up, Next Level would find their shot, always keeping the Larks a few points behind. With four minutes remaining, the Larks trailed 29-22, but their first real run of the game was about to happen.

The Larks hit a three with some great dribble-drive ball movement by Grant Harding and Derrick Magiya to free up Braden Handcock for the open look. The Larks went on to hit another three and make several free throws to draw within one, 35-34, with just under a minute on the clock. Off a defensive rebound with seven seconds on the clock, Harding found the quick outlet to a streaking Lucas Comfort who races down the court. The contested layup falls and Comfort gets fouled, giving him an and-1, which he sinks. The Larks head into the locker room with a 37-35 lead.

The second half sees more back and forth action as Next Level Prep goes on a 14-3 run early in the half. At the 13:43 mark in the second, the Larks find themselves with their largest deficit of the season down 56-45. Hesston tightens up its defense and starts clawing back, taking the lead on a Reese Nebel jumper with 8:58 to go. The lead continues to change hands until 1:20 remains in the game. Off the steal by Comfort, Harding hits a jumper tying the game at 80. The Larks held Next Level scoreless in the last three minutes of the game to take the win, 86-80.

The Larks were out rebounded by the more athletic Next Level Prep 35-23, but the big story was points off of turnovers. The Larks had a +6 differential, which was the final margin of victory on the night. The Larks hit 41.7% from behind the arc, led by Cal Hartley who went 6-11 and scored 25 on the night. Derrick Magiya (16), Grant Harding (15) and Braden Handcock (10) scored double-digits for the Larks. Grant Harding had a double-double adding 13 rebounds to his 10 points.