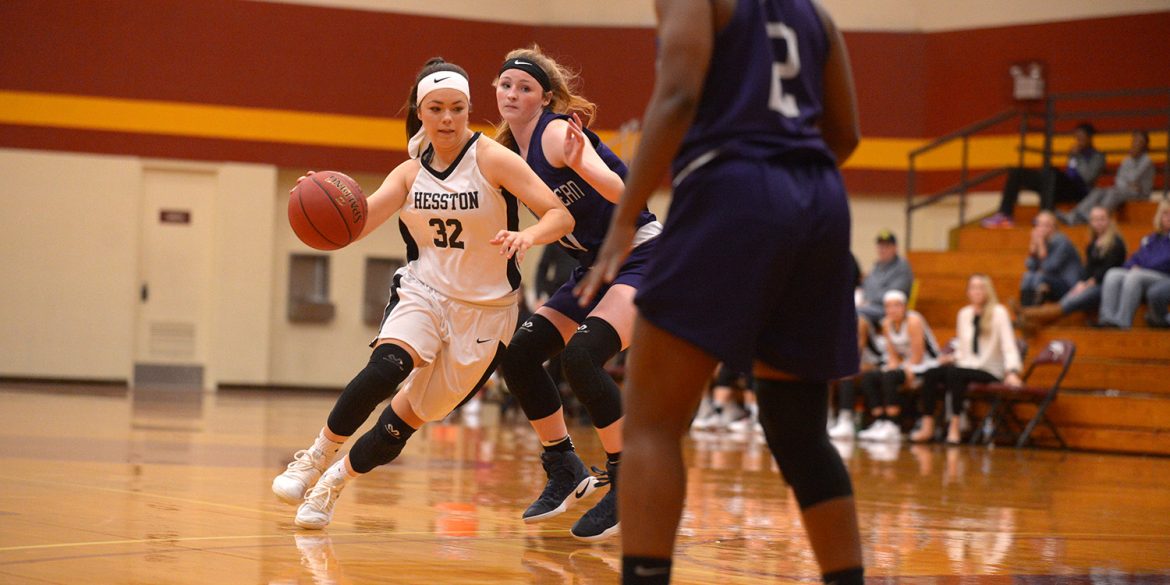 Atkinson hopes to continue making history playing basketball after Hesston, but no future is certain. In fact, that uncertainty was a driving factor to her success.

“I’ve been thinking that these could be my last few basketball games, so I’ve been trying to make the best out of it,” Atkinson said.

At the end of the season last year, Atkinson was only four three-pointers away from breaking the single season three-point record, something she wasn’t informed of until the end of the game. Although disappointed, she didn’t let the record become her focus for this season.

“This year I didn’t think about it that much,” she said. “I had a different mindset as a player. I didn’t want to be selfish and always take the shots and drive. I wanted to be more of a team player.”

And just as the previous season, no one informed Atkinson of how close she was to breaking the record until she broke it 30 seconds into the game against Tabor College JV. She was just as surprised as the crowd when Coach Jeff Jacobs informed everyone in Yost Center the she had broken the two records after the first quarter.

“I really didn’t think too much about it,” Atkinson said. “I knew it was getting close but I didn’t worry about it. I thought I was still a ways off.”

Now that Atkinson has achieved success at the collegiate level, she reflects on her accomplishments and how she got here. She credits the people who believed in her, but also the people who didn’t – specifically her high school basketball coach.

“I guess a lot of it was I wanted to prove a point: that I didn’t need him,” she said. “My senior year I did all of my recruiting on my own and I didn’t ask for his help. He didn’t even come to my signing day when I decided to come here. I knew some people believed in me, but not my high school coach so that was kind of my big thing.”

But that wasn’t the only factor. Atkinson also worked hard during the offseason to better herself, to further fulfill her dream of playing college basketball.

“Every day during the summer I’m at the YMCA, from 4-6 hours depending on how much I work at my job,” she said. “I was in the gym a lot this summer just shooting.”

Although she would like to continue to play somewhere else after Hesston, Atkinson is content with what she’s accomplished.

“I told my mom at the beginning of the season that if I broke that record it would feel good because if I don’t play basketball I would at least accomplish this one thing,” she said. “I feel pretty good that I did something here.”