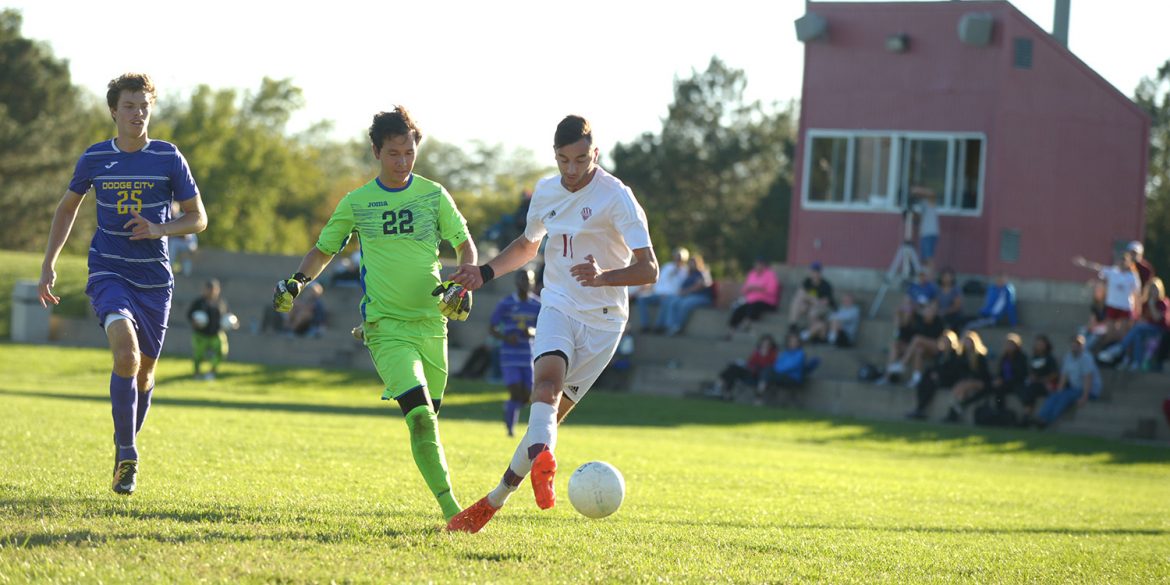 At home on a beautiful Saturday night, the Larks picked up their second NJCAA Region VI win of the year, defeating the Conquistadors from Dodge City Community College 2-1. This is the first time Hesston College has had multiple NJCAA wins in five years and gets the team to seven wins on the season.

The Larks started off strong with great intensity and a willingness to fight for each other. The persistence paid off when, with 13 minutes left in the half, Nadeem Jaber pounced on an errant touch by the Dodge City keeper and took a few touches pass the defense. Jaber calmly slotted home the game’s opening goal. Just two minutes later, the Larks neglected their marks on a corner kick and the Conqs tied the game. The half ended all knotted at 1.

The second half saw the same high intensity with both teams getting several chances. Captain Luke Hertzler had to come up big a few times for the Larks in net keeping the score line tied. Finally Hesston’s breakthrough came in the 65th minute. A quick outlet from Conquistador pressure saw Josh Jantzi move quickly up the sideline with the ball. A pass across the center to Colin Williams saw him fight through a tackle and find Cain Hernandez. Hernandez quickly found Javier Reyna with a switch of the field and Reyna did the rest. Taking a couple of touches to set himself up, Reyna struck a beautiful 35 yard bomb across goal beating the keeper to put the Larks up 2-1.

“The boys put it all together today,” said Head Coach Matt Gerlach. “The fight and desire was there from the start and continued throughout the entire game.”

The rest of the game was a grind. With a Hesston College defender seeing a second yellow, the Larks had to play with 10 men for the last 15 minutes. “They gave more effort tonight, they completed the game plan with that extra effort and played for each other. They took pride in what they were doing and had a willingness to make great defensive tackles and attacking runs,” said Gerlach. “They earned this victory”