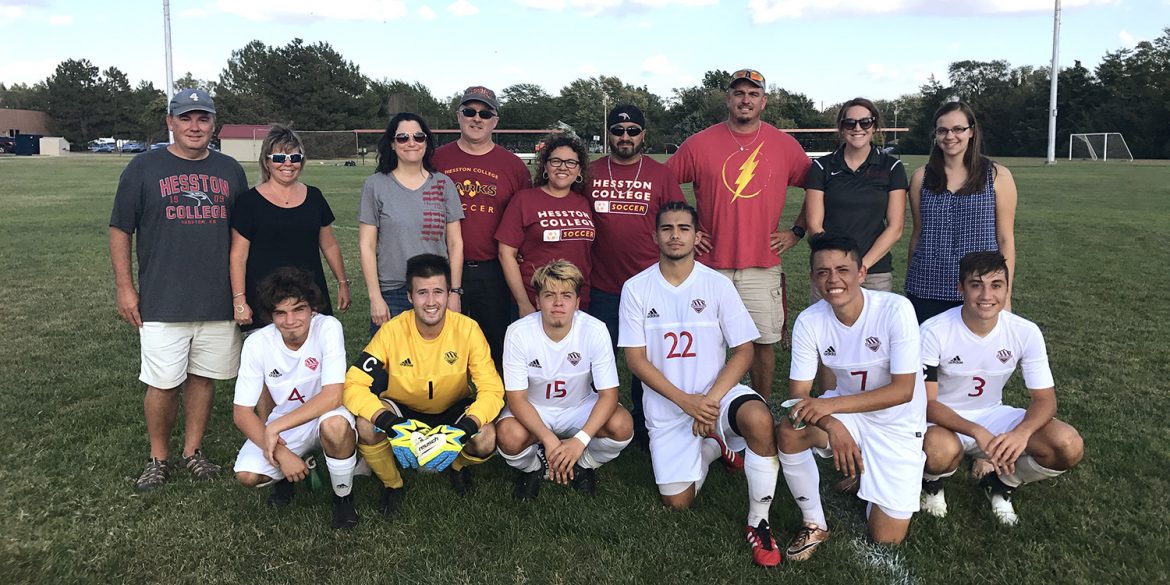 With homecoming festivities in full swing at Hesston College, the men’s soccer program celebrated their sophomores’ dedication to the school and the program as well as a 1-0 overtime win over the Kansas Wesleyan Coyotes reserves. With tired legs after playing a hard fought game Thursday night, Friday’s heat slowed the game down. The Larks had a majority of the passion and chances in the first half but no one could break the deadlock.

At halftime, six sophomores – Landon Baer, David Gottesman, Dakota Hearrell, Luke Hertzler, Cain Hernandez and Zach Williams – were celebrated as they stood with their family and friends. Coach Matt Gerlach took a moment thank the players. “They struggled and endured. I appreciate their continued commitment to excellence and willingness to fight through the hard times. These six will be a marker of who and what this program is to be for years to come. They persisted and can now take pride in being a Lark, growing as a man and in who and what this team will be in the future. It is because of them that we are who we are today.”

After this celebration, the game was back on. Two goals for the Larks were nullified due to offsides. At the end of regulation, the score was still 0-0. With golden-goal implemented, the pressure was ramped up a bit as the teams took the field for overtime. Only six minutes into the first overtime, Ricardo Pineda played a ball back to sophomore Cain Hernandez who unleashed a rocket from 20 yards. It found the top corner of the net and the game was over.

“It was excellent to grind out a win like that,” said Coach Gerlach. “We pushed through, the sophomores led and willed the team to victory after two consecutive nights of hard fought soccer. It makes me, and should make them, proud.”

This win puts the team’s win total above their total for last year just half way through the season. The Larks look to keep winning this Tuesday when they host Northwest Kansas Tech at home at 7 p.m. and McPherson College reserves on Friday at 7 p.m.