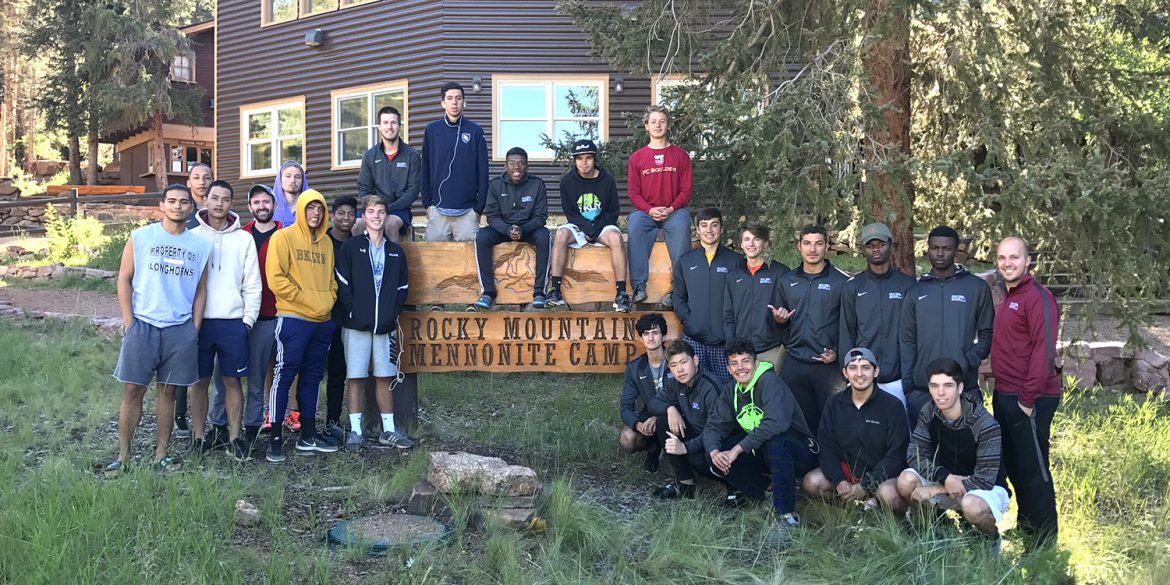 The men’s soccer team gathered ahead of the rest of the Hesston College fall athletes to travel to the mountains of Colorado. Twenty-three players and two coaches left Sunday, August 6, and headed to Rocky Mountain Mennonite Camp (RMMC) near Divide, Colo. The goal of the trip was to get the team together a week earlier to train, build team chemistry and solidify the core covenants of accountability, engagement, community and joy through service.

After an eight-hour trip and a flat tire, the vans bounced up the mountain to an elevation above 9,000 feet. Bright and early Monday morning (and also Thursday) the team went on a two-mile trail run to the top of Raspberry Mountain, summiting before breakfast at 10,605 feet. After breakfast on Monday, Tuesday and Thursday the team worked with the staff at RMMC cutting down trees revenged by the pine beetle, moving the logs to be sold and the slash to be chipped for mulch to be spread around the camp. All three evenings the team also had a chance to travel about 35 minutes to Woodland Park to get onto the practice field.

Wednesday the team headed to the Royal Gorge and meet Hesston College alumnus and former academic dean Marc Yoder to go white water rafting on the Arkansas River. This was one of many firsts for most of the guys. The ‘firsts’ are really what many of the guys said were the best parts of the trip. First time to see mountains, first time to see snow, climb a mountain, go white water rafting, to go rock climbing and rappelling as well as sleep in heatless cabins in colder than 40 degree weather were all on the ‘firsts’ list for most of the players.

“Overall, the trip really brought the guys together,” said Head Coach Matt Gerlach. “They were forced to work together, forced to be tired and pick each other up and they had a lot of fun. It was really a chance for us to get an amazing head start on our season and I believe it has set the bar high for our team chemistry and I hope that will translate to on and off the field success.”

After a half day of work on Friday morning the team got another new opportunity which quickly turned into a highlight, an evening in Colorado Springs and at Garden of the Gods. Here the team ran into former Hesston College soccer player Mark Lakin visiting from Michigan. Taking advantage of another half day of work on Saturday several guys hiked up a 13,000 foot summit near Pikes Peak while others played a 3 on 3 basketball tournament.

Overall, the team helped cut down and clear 27 pine beetle infested trees, moved 20 500 to 1,000 pound logs, spread 20 pickup truck loads of mulch, filled potholes with five tons of dirt and gave more than 600 community service hours as a team. The players had lots of new adventures while experiencing numerous brand new opportunities. Most important they bonded and are more willing and likely to serve each other and their community on and off the field.