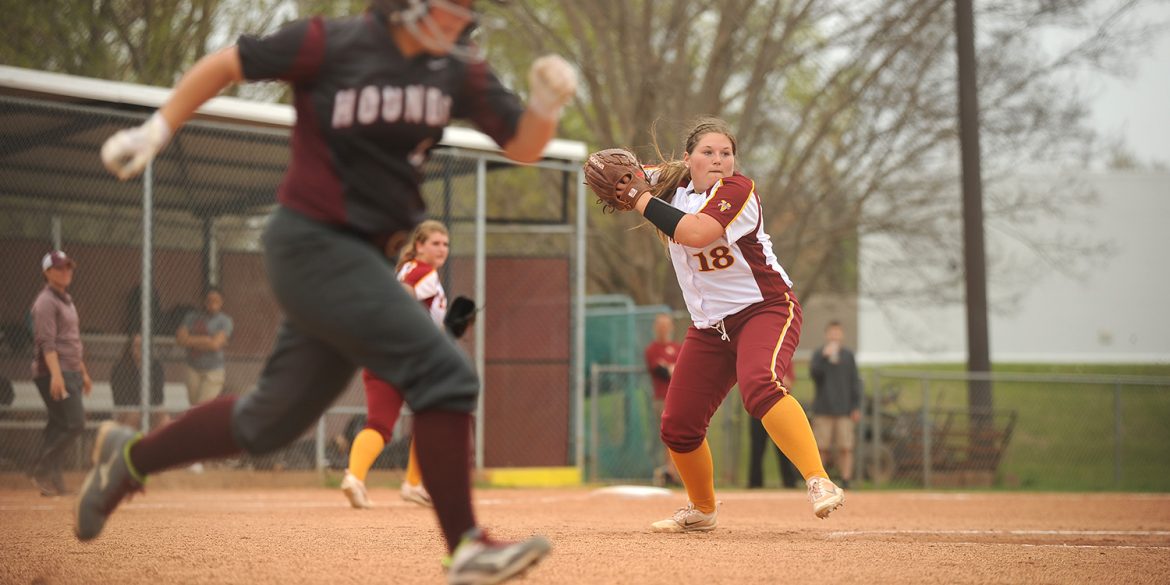 Records are meant to be broken. Just ask the Hesston College Larks softball team. With a two-game sweep of the Independence CC Pirates earlier in the week in Independence (Kan.), Hesston softball reached 24 wins (24-18). This surpasses the program’s record for wins in a season – 23 during the 2012 season, Coach Sharp’s third year at the helm. That year they finished 23-29, eventually falling in Topeka to Labette CC in the second round of Region VI playoffs.

Along with the team accomplishment, a couple Larks have reached individual milestones during this record breaking spring. Sophomore first baseman Jerrica Brown (Clovis, Calif.) has become the Larks’ all-time leader in home runs (14) along with runs batted in (89). Sophomore catcher Ally Steiner (Phoenix, Ariz), who is headed to the University of Northern Colorado (NCAA DI), has tied the records for the career hits (113) and stolen bases (60).

Brown and Steiner have received plenty of help, as the Larks’ bats have been solid from top to bottom, led by Sierrah Long’s 32 RBI. “Our lineup has been quite balanced with a lot of production from a lot of different players,” Coach Sharp commented. “We have good athletes all around the defense and our offense brings a little bit of everything to the table.”

Pitchers Ashley Yasin (Lake Isabella, Calif.) and Chantel Purcella (Albuquerque, N.M.) have been extremely consistent this spring, combining to go 24-17 and accounting for all of the team’s 24 wins. Yasin has struck out 121 batters, while Purcella has fanned 86. “They (Yasin and Purcella) have been outstanding. Ashley’s 121 strikeouts sets the all-time single season record. Chantel, not far behind, will likely finish as #2 in a season for strikeouts,” Sharp added.

The Larks (24-22) followed up their performance with a tough double header loss to Cowley College before dropping both games to #8 Johnson County (5-4, 7-2) competing with one of the best teams in the country. Even so, the Larks will have an opportunity to head into Region VI playoffs next weekend (April 29-30) on a positive note as they host one more double header to conclude the regular season. “We’re looking forward to a great showing in post season play,”” Sharp commented.

Next up – The Larks will look to add to their season’s win total when they welcome Tabor College on Wednesday, April 26, for sophomore recognition night. First pitch against the Blue Jays is at 5 p.m. from Hesston City Diamond.