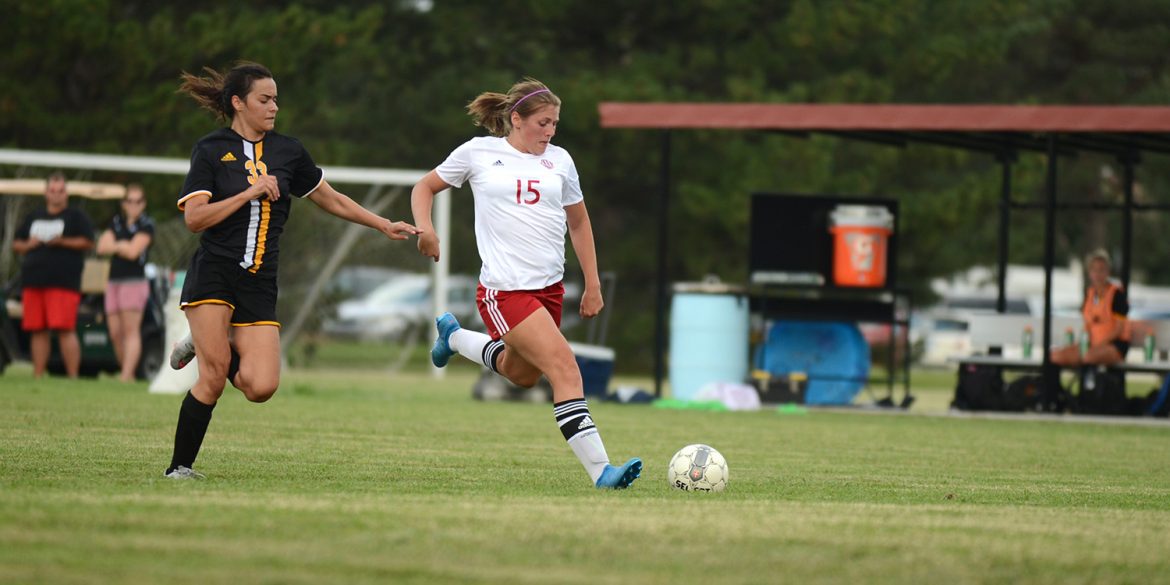 To say that sophomore Allison Ebersole (Boulder, Colo.) is having a good season would be an understatement. It’s barely half over and Ebersole has already grabbed the Hesston College career scoring record. Her 11 goals in nine games have launched the Larks to a an impressive 8-1 record. In 2015, she tallied 19 goals giving her 30 in her career, surpassing Mikaela Zook’s impressive career record of 28 goals set last year.

“It’s just my job,” said a smiling Ebersole following a practice late last week. “My teammates have been able to put me in good places,” including fellow sophomore Mika Matsuda (Kyoto, Japan), who came into the weekend leading the nation in assists with 14, many of these going to Ebersole.

Ebersole’s new record at Hesston is more remarkable considering that soccer was not her main sport in high school. A four year letter winner in volleyball at Centaurus High School (Lafayette, Colo.), she didn’t originally plan on playing collegiate soccer. Her athletic ability is no surprise. Allison’s father, Ken Ebersole, was a multi-sport athlete and, later, a coach at Hesston College. Her mother, Meredith, was a college soccer player at Penn State University (State College). Coming into college, Ebersole seemed as if volleyball was her path, however late in the process she decided to commit to Hesston College for soccer, a decision appreciated by both her teammates and coach Bryan Kehr.

“Allison has been an impact player for us from the day she arrived on campus,” Coach Kehr noted. “We kind of knew this record would fall and we hope she will add quite a few more over the course of the season.”

Ebersole and company will look to add more goals and wins on the season as the Larks continue their impressive run. Hesston College women’s soccer will be back in action Monday, Sept 26 against Bethany College JV at 5 p.m.