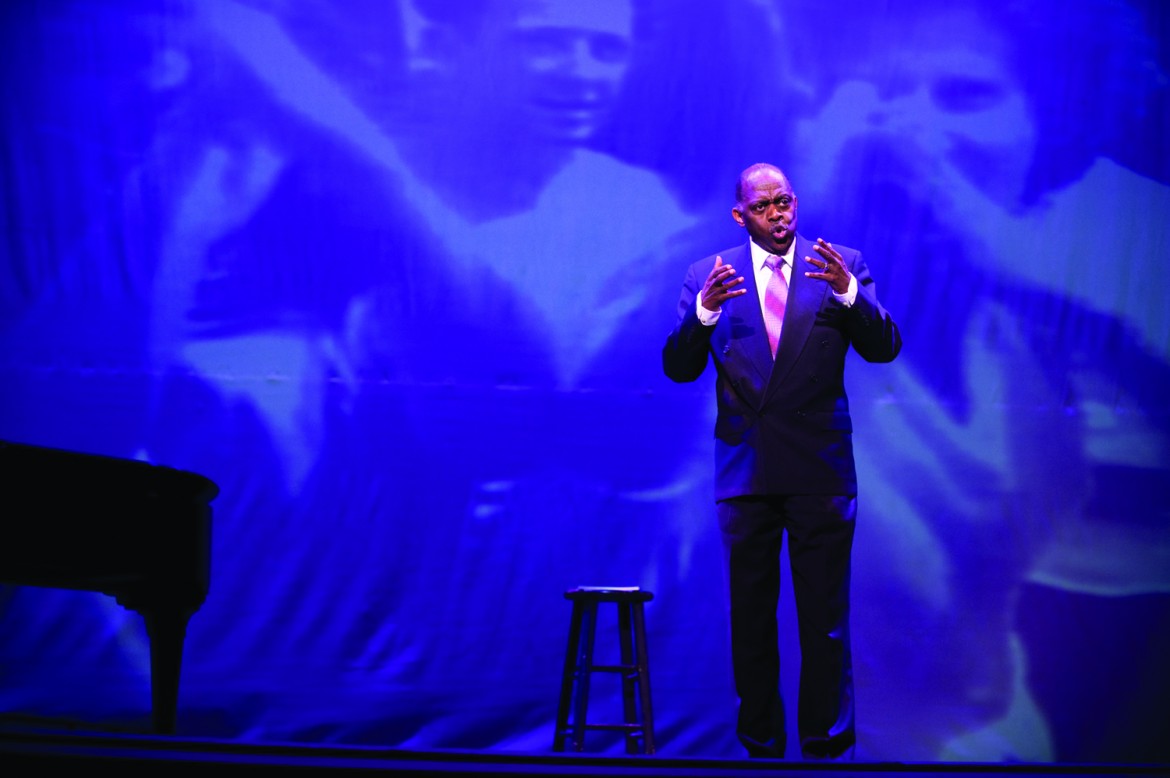 Brown’s tribute to Robeson, all-American athlete, scholar, champion orator, international recording artist and star of the stage and screen during the 1930s and 40s, was written for Brown by playwright Andrew Flack. Brown’s telling of Robeson’s story is a 90-minute song-filled, multi-media presentation that reveals him as a towering figure in 20th century American history.

Accompanied by a pianist, photo projection and a narrator, I Go On Singing is equal parts historical documentary and live concert experience. Using Robeson’s own words from his autobiography Here I Stand and comments from legendary peace activist and artist Pete Seeger, the show traces Robeson’s humble beginnings as a preacher’s son in Princeton, N.J., to his international celebrity and pioneering activism on the world stage.

Brown is an international promoter of peace, Hesston College sociology faculty member and artist in residence and founder of Peacing It Together Foundation, an organization that serves the global community as a resource for peace and social justice. He uses music and the spoken word to bring people together across the divides of race, culture and religion. His travels have taken him to countries such as Bosnia, Moldova, Northern Ireland, Uganda, Ethiopia, the Philippines, China, Japan, South Korea and Colombia, where he has seen music transform and heal.

I Go On Singing premiered to inspiring reviews in Princeton, N.J., in 2011 and at Wichita’s (Kan.) Orpheum Theatre in Feb. 2012. Performances in 2014 include Denver and San Francisco, as well as in front of large campus audiences at Eastern Mennonite University (Harrisonburg, Va.) and Goshen (Ind.) College.

“We were very fortunate to have witnessed Mr. Brown’s portrayal of the music, life, and times of Paul Robeson,” said Benjamin J. Colbert, chairman of The Paul Robeson House Committee in Princeton. “His performance in I Go On Singing brings new life and inspiration to a generation of admirers.”

“Anthony Brown is a treasure,” said Patricia Fernandez-Kelly, Ph.D of Princeton University. “Endowed with a superb baritone voice, he has assembled an exquisite show that celebrates Paul

Robeson and his times. Instructive and deeply touching, Mr. Brown’s performance is extraordinary. More people should have the opportunity to witness it.”

Tickets are $15 for adults, and free for high school students and younger. Tickets can be reserved in advance by calling Lancaster Mennonite School at 717-509-4459 ext. 703.

Tickets will also be available at the door prior to the performance. Go to igoonsinging.com and hesston.edu for more information.