Coach enjoys players’ growth alongside that of his program 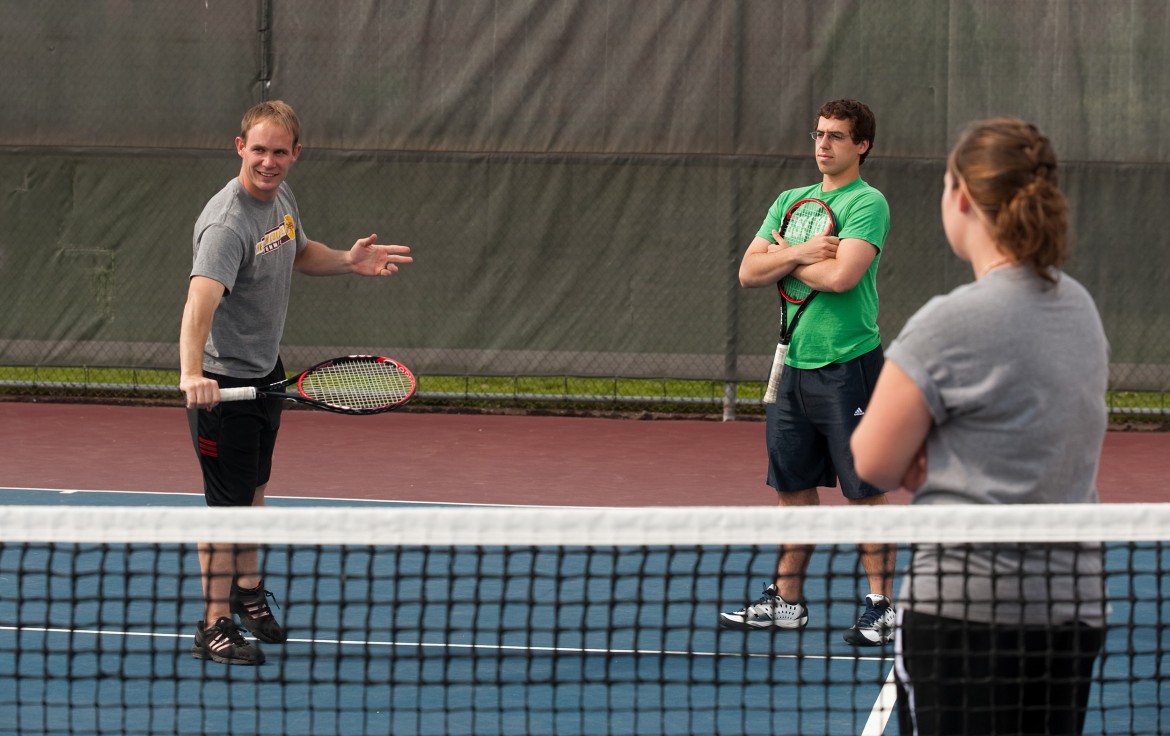 It started with an email. On one end of the conversation was an athletic director eager to find the right person to breathe new life into a college tennis program. On the other was a former college tennis player eager to return to his alma mater and pass on the positive experience he had there to future students. The program had been dormant for a year, and the college was interested in finding the right person who had the energy, passion and skill to resurrect the program.

Jeron Baker, currently in his third year at the helm of the Hesston College tennis program, was the recipient of that email written by Art Mullet, Hesston’s long-time athletic director. Two months after that initial contact – which had been encouraged by current Hesston faculty Jen LeFevre, Baker’s tennis coach at Hesston – Baker returned to the Hesston campus to interview for the position. By day’s end, the job was his.

Now, three years later, it’s evident that Baker’s players are experiencing the same personal growth he did, all the while playing lead roles in the rebuilding effort that has stabilized Hesston College Tennis.

“When we were looking for a new tennis coach, I immediately thought of Jeron,” Lefevre said. “I knew we needed someone with a solid knowledge of the game as well as a passion for the sport. Jeron is a great recruiter; he’s very relational and is a natural at connecting with people.  I’ve enjoyed watching him continue to grow into his role as tennis coach and really strengthen the program.”

Baker saw the tremendous opportunity in the chance to come back to his alma mater and resurrect a program for which he deeply cared. He immediately felt ownership in the call to mentor young players and watch them grow. As the result of his efforts, the program grew, too.

“When offered the chance to not only return to Hesston, but be involved with tennis, my first instinct was to jump on it immediately,” Baker said. “Being able to relate to Hesston students and utilize my abilities to impact their lives was the ultimate opportunity for me.”

Sophomore Adam Weaver, Hesston, Kan., describes Baker as a tremendous motivator; someone who has a pulse on the physical and mental needs of his players.

“Jeron is aware of our lives outside of tennis,” Weaver said. “He’ll often stop me on campus and ask what my day’s been like and if I’m feeling ready to play that day. On the court he’s helped me maintain my focus and intensity. There’s hardly a drill where he’s not jumping in and teaching right beside us.”

A chemistry major whose involvements on campus include being a lab assistant and resident assistant, not to mention his time with the tennis and soccer programs, Weaver played the best tennis of his life this spring, according to Baker.

“Adam has been just amazing this year,” Baker said. “It’s rewarding to see players’ successes and growth throughout their time here. He’s been a big part of our program.”
Weaver wasn’t the only player to experience success this season.

“I hadn’t planned on playing tennis in college,” said freshman Alyssa Horst, Orrville, Ohio, who came to Hesston initially to play volleyball. “Getting to know Jeron throughout the year got me interested in giving it a shot. He has a different style of coaching that I’ve never experienced before. He’s very intense and energetic. He motivates us, stays positive and just doesn’t tolerate negativity.”

In the end, after the final game of the final match has been played, it’s the overall college experience of his players that Baker is most interested in. This mindset has, in turn, led to new heights for the Hesston College tennis program.

“My personal Hesston experience wasn’t defined by tennis, but was highly influenced by it,” Baker said. “I loved my time at Hesston and the relationships that existed. Looking back, tennis was a small sample of the larger model that existed for me there.”

“I’m looking forward to being a sophomore next year and getting to know an entirely new incoming class of students, which is basically half the student body,” Horst said. “It’ll be a great new start to another great year.”